This thread is for discussing strategy related to Costumed Black Knight, as well as your thoughts on him. 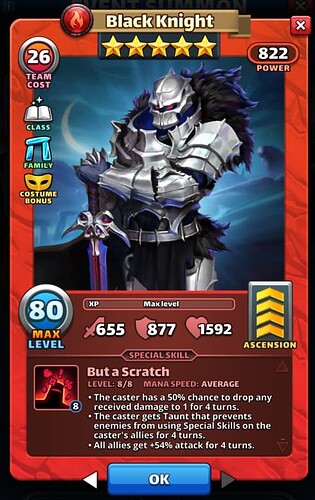 There appear to be no changes to Costumed Black Knight from last-seen Beta stats, skill, and design.

What do you think of Costumed Black Knight ?

This thread is for thoughts and discussion on Costumed Black Knight.

Based on preferences Forum members have expressed, please try to stick mainly to Costumed Black Knight and not wander off topic too much to other heroes.

Is Costumed Black Knight worth Summoning For?

How many copies of Costumed Black Knight would be useful to keep & Level?

What do you think Costumed Black Knight’s Primary Purpose is?

What do you think of Costumed Black Knight compared to other Heroes?

What do you think which version of Black Knight is better ?

Is Costumed Black Knight worth giving Barbarian Emblems to the original hero?

In Defence, where do you think Costumed Black Knight is best used?

How do you think Costumed Black Knight is best used?

What do you think is Costumed Black Knight worth Limit Breaking ?

If you would emblem Costumed Black Knight then which Emblem Path would you select ?

I haven’t gotten a new red 5* since I got BK whilst literally hoping for Bauchan last year… C-BK would be so amazing to break my drought.

Wouldnt you prefer any other red hero, since you already have functional BK?

I’ve a heap of barbarian emblems I could use on a second BK.

I got him today and leveled him up. Here are the LB stats going shield path:

That is nasty! Got him as well with a 10 Pull, now I am kind of sad since I chose him in SE over Grimble

I have not limit broken Black Knight yet, but I will today. I am just out of feeders at the moment. This is all shield path. Wizard and barbarian work nicely that way.

Here is what he looks like maxed but not limit broken 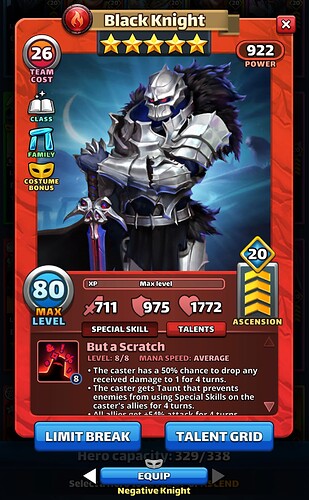 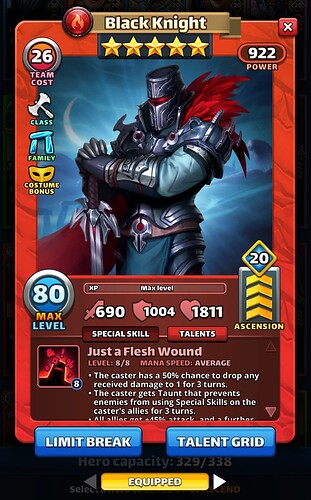 Could be even more defensive

This hero costume isn’t a must-have if you already got one. If you have the tiles to fire his special, you pretty much wins anyway. Defense wise, bringing a dispel can still counter him. He is just a tile spamming wall until your dispel is ready. Hence why no one uses him in War defense nowadays.

and also beacuse current META is buff immunity (El Nadahha, Hypnos, C. Panther, etc,…
He can be too easily shut down. I seriously consider going Queen of hearts to lvl before him, since her taunt cant be stopped by buff imunity or dispell and she still deals some dmg in case she cant get a card… Her defense stats are still relevant today 720 def, over 1500 hp before emblems…

So, we get a nerf to Costume Krampus, and then they release this guy? lol Sounds about right for this company.

Yep, I voted OP because apparently C Krampus was and they specifically said the 4 turn taunt was too damn much. Now they dangle the carrot again. Buyer beware on this one.

This shows exactly why all the talk about “carefull balancing” from SG is just a bunch of nonsense. The dishonesty is what triggers me the most.

I believe he is very relevant and I still would like to have his costume. His appearance he is very avant-garde

dont fret this is an easy fix those that got him max him node 20 LB place him on defense team make sure the other 4 heroes compliment him perfectly so that the defense never loses and by the next update he’ll be nerfed like Krampus-C.

I love it when I’m not chasing heroes. Just did a single pull with no intention of even wanting the new costume, since I am extremely happy with the BK that I got. And then he emerged from the portal with his glorious costume.

Since my OG BK is emblemed and limit broken, the new costume will be fast tracked so that I can take advantage of his 4 turn taunt. And it’s not like he loses a whole lot on his defensive stats.