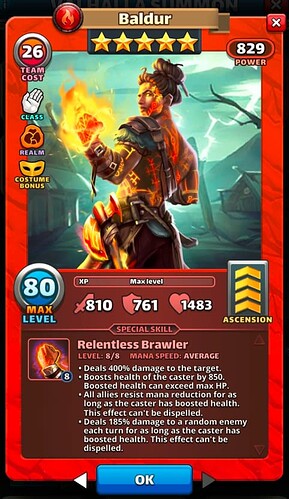 There appear to be no changes to Costumed Baldur from last-seen Beta stats, skill, and design.

Beta Information: 🧪 Early Information on Round 1 of Season 3 Hero Costumes [Part of The Beta Beat v49]

What do you think of Costumed Baldur ?

This thread is for thoughts and discussion on Costumed Baldur.

Based on preferences Forum members have expressed, please try to stick mainly to Costumed Baldur and not wander off topic too much to other heroes.

Is Costumed Baldur worth Summoning For?

How many copies of Costumed Baldur would be useful to keep & Level?

What do you think Costumed Baldur’s Primary Purpose is?

What do you think of Costumed Baldur compared to other Heroes?

What do you think which version of Baldur is better ?

Is Costumed Baldur worth giving Ranger Emblems to the original hero?

In Defence, where do you think Costumed Baldur is best used?

How do you think Costumed Baldur is best used?

What do you think is Costumed Baldur worth Limit Breaking ?

If you would emblem Costumed Baldur then which Emblem Path would you select ?

My most wanted hero in game

I love him and haven’t stripped him from emblems, but he only comes into play when I face LotL or Ruby… I want this costume really bad, but I will not pay for it… Pair hin with M&M, Arco, Rhys, Celidana or another hero of you choice that boost health and he will be annoying again.

So much fun in beta. His costume is what he should have been to begin with.

It’s just a straight up buff for a mediocre hero. I wish they would stop doing that with costumes. Just fix the hero! Also, I appreciate when a costume gives a hero a different ability, making both forms useful.

It’s just a direct buff of the original Baldur. Everything the same, just better numbers. So everything which costumes should NOT be.

Nonetheless, the guy has quite a punch right now. With water piping here and there he could be really handy.

Lucky enough to pull him today… Abilities r ditto same as original with bumped up numbers… In place of giving a fancy costume, they could have fixed him in Nov month’s hero balance!!
Or it is another gimmik to make money??
Anyway I m more than happy

instead of make a buff for Baldur, they released the costume with the specs everyone asked for and collected more money

Well, to be more precise :

And my defense team :

True, but the thing is, everything works with M&M

This is the one hero from Valhalla I want… of course I wont get it. Not going to spend a penny trying though.

Have to admit, my master plan defense described above isnt working well on first day…

Guess Baldurs are too busy looking hot than defending