Did a quick search and didn’t find any previous posts of this so here it is.

I did about a dozen tries and this happens around 80% of the time and it seems to only happen when all of the opponent’s heroes have the dodge buff active, although she has never actually done damage to more than 3 due to dodge but the healing effect from dodge (Hanitra’s) did get triggered so it’s not just a visual bug.

I have only tried with using Hanitra on offense vs Costume Marjana on defense and not the other way around, have not tried any other dodge hero (Inari, Margaret, etc.), and have not noticed any hero other than Costume Marjana does this.

I think it’s kinda similar to this one (regarding the visual problem):

I was playing a raid match. I had set off Hanitra and Uraeus attacked and had 2 people hit by him although they both missed due to Hanitra special but some sort of bug I guess.

Kinda, but definitely not just a visual problem.

This is after she fired on 4 targets (the last picture in the opening post) where 2 took damage and 2 dodged, the 2 dodged got healed so this actually affected all 4 heroes.

maybe it’s really just a visual bug and they only dodge the atk down what Marjana gives?

that does not make sense, definitely a bug.

One of cMarjana’s skills is a -34% attack down to all Ice Enemies. That’s why sometimes more than 3 heroes are hit. It depends on which hero she is targeting 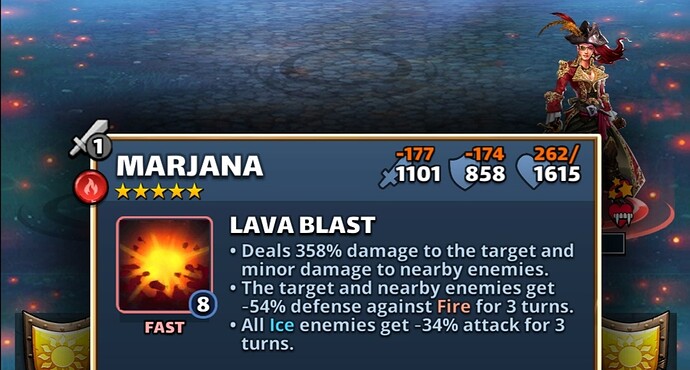 In the case of the last screenshot, cMarjana fired at the Ice hero in the left flank (not sure which hero is that), so Milena gets the damage and Alasie should only get the attack down, but she dodged it.

In the screenshot where she fires at everyone, her target was Alasie so the left 2 heroes are hit with the -34% attack down

Good point. But that attack ailment is different than the actual hit/damage. When testing on the map, our belove S1 8-7, she only fires were targeted and you see the attack ailment after the damage (in fact, you would’nt even see that ailment as she always kills her target at that level). So that doesn’t explain the OP issue.

both damage and ailments can cause a dodge. it explains this issue. Maybe it is a visual issue.

But those mobs don’t dodge. This is caused by successful dodges by Ice heroes not in the cone of attack. I’m guessing here that the devs decided showing the Attack animation to more than 3 heroes is less confusing than only showing the usual 3 and having a hero outside that cone show the dodge animation without being touched

Edit : We could test this if there is another hero that hits 3 or even 1 but has extra effects to more than that. Ok, guess that explains the Uraeus issue where the sand damage is dodged