Great idea! Thanks for doing this. Unfortunately, I’ve already completely leveled the two costumes I have, so I can only give you some final stats.

My Gunnar with maxed costume currently has emblems, so that will skew his stats, but I’m probably going to pull his emblems later this week when I finish Cyprian, so I’ll try to check back then and post if no one else has.

Here are a lot of costumes (without bonuses applied) … if someone smarter then me could make this an album or something… that would probably be a lot better. @DaveCozy @zephyr1 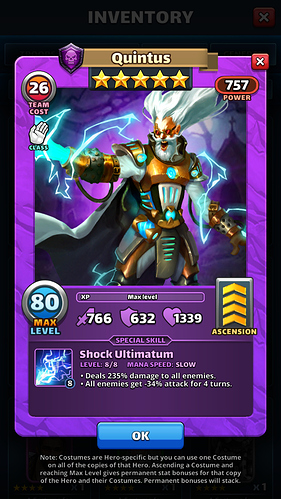 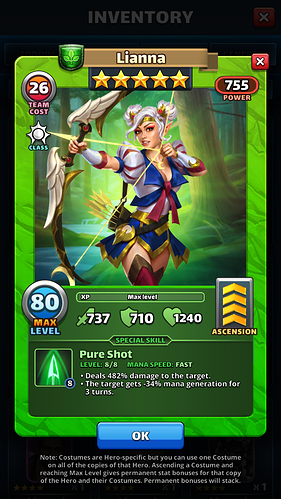 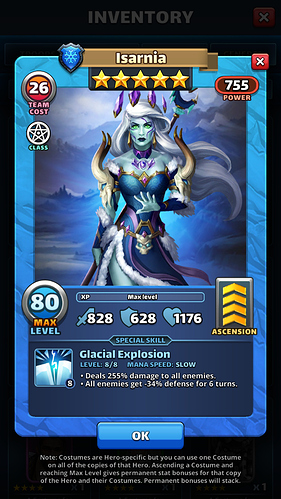 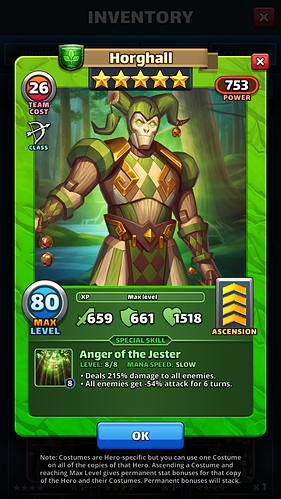 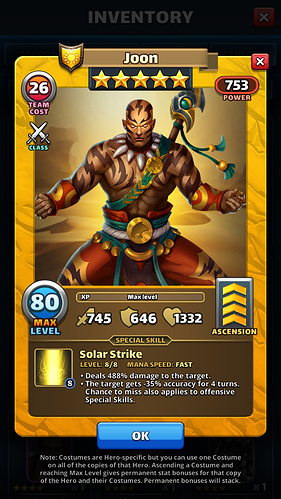 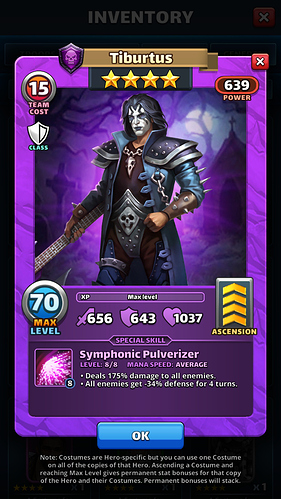 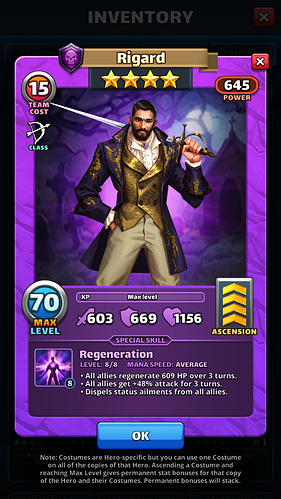 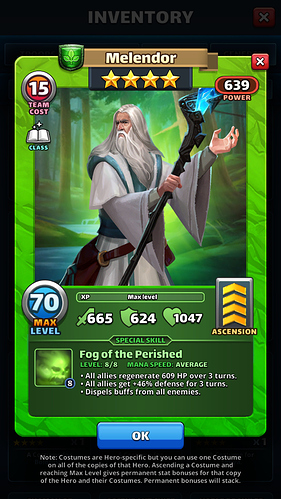 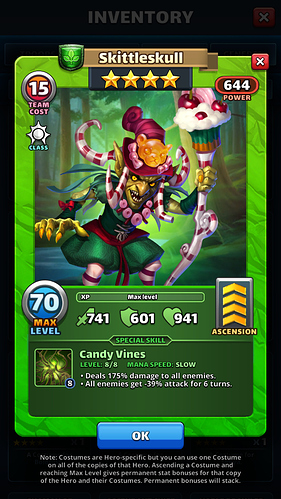 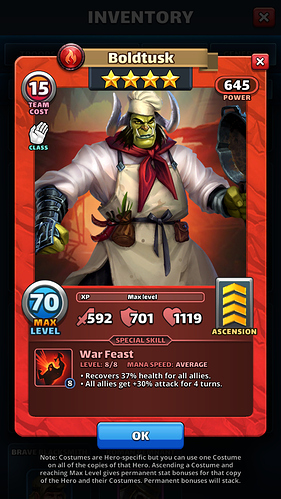 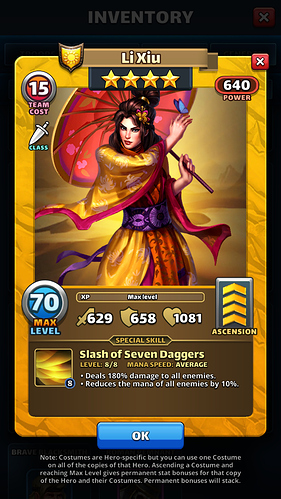 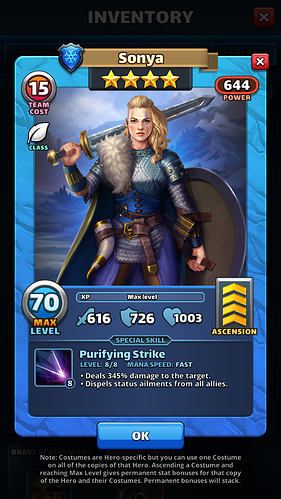 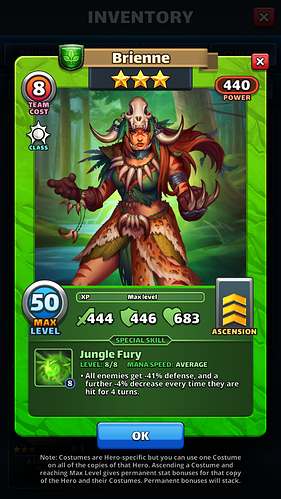 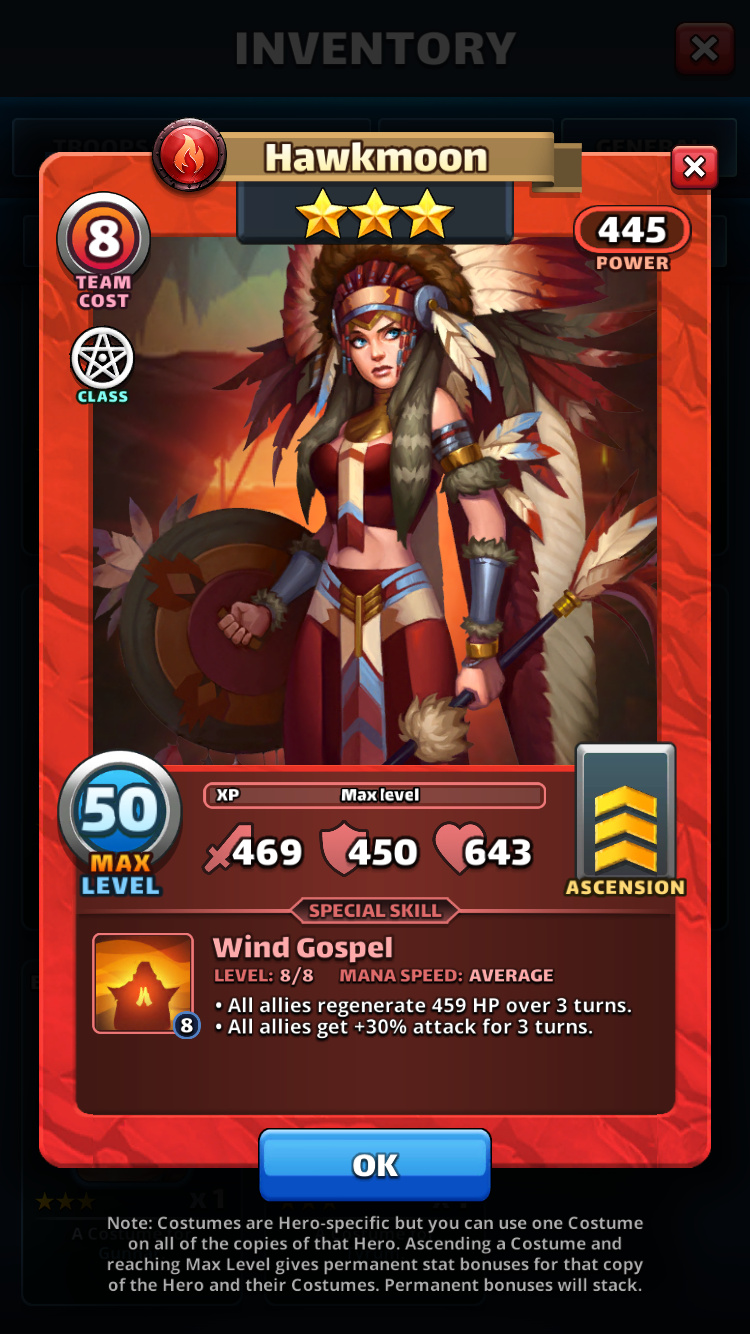 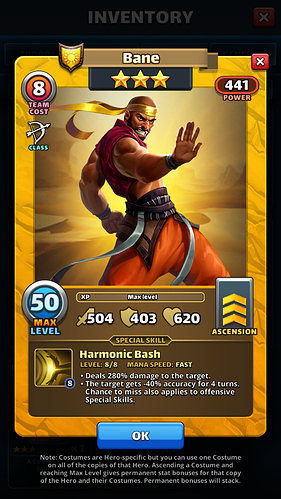 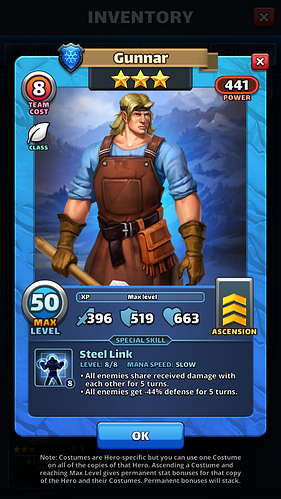 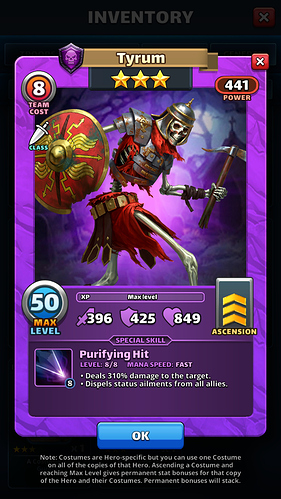 Graphic of the base hero’s new stats after their costume is maxed.

Heads up (as we may have discussed privately already, I can’t remember) — these changed very slightly in Version 26, so screenshots from before the new version may be slightly off.

Good call. All photos above are from v26, so those are safe, I believe. (Although they’re kind of worthless as the stats will never be the same as those pictured… so maybe best to remove… I’ll leave them for now in case they have any value)

Thanks for doing this

[image] Hero Stats Appendix What is This This is a compiled list of every 3*, 4* and 5* (both at 3-70 and 4-80) hero for Empires and Puzzles. This spreadsheet displays all of the stats of a hero [when they are fully leveled] including: Attack | Defense | Health Specials Speed Origin Element Family Class Resist For heroes with costumes, there are 3 varietals possible: Original Original + Costume Bonus Costume + Costume Bonus What makes it different than other hero rosters like @Pois1’s …

Also may be interesting the “then & now” costume thread:

@Lumi Do you want heroes at +20 with the maxed out costume bonuses too? I can at least provide a +20 Brienne, and as soon as I get my hands on a few more cleric emblems, Hawkmoon will be at +20. 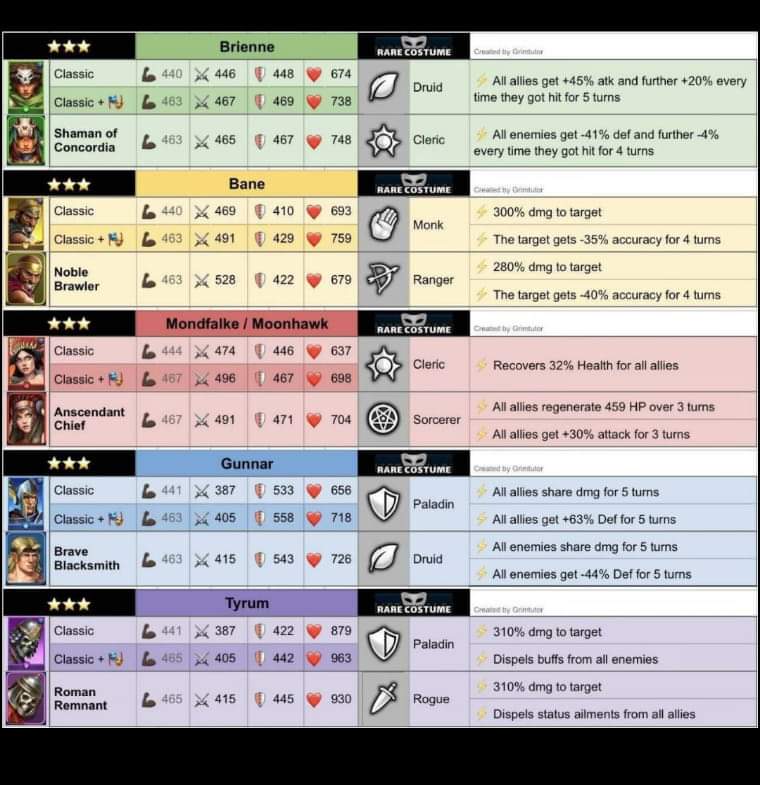 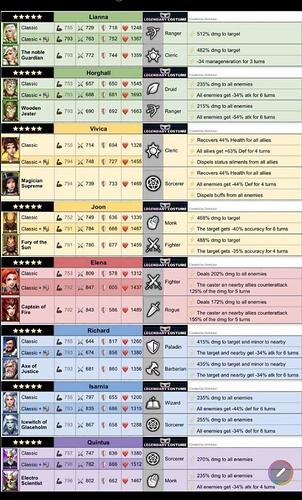 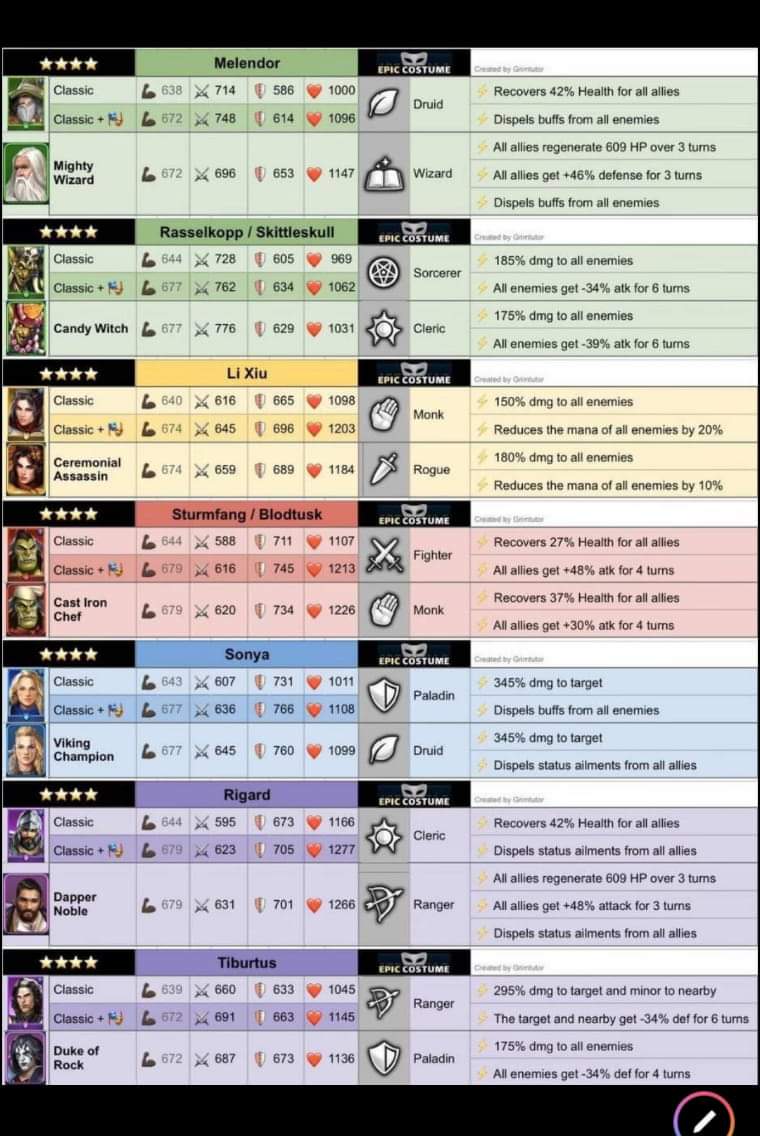 @Lumi Do you want heroes at +20 with the maxed out costume bonuses too?

I won’t say no

. The future goal is to have a better central spot for each hero’s goalposts, for people to be able to reference. Max, +20, Costume bonus, all three. That way, the community can help everyone in the decision process, rather than each alliance having to recreate the wheel each time

Here are a lot of costumes (without bonuses applied) … if someone smarter then me could make this an album or something… that would probably be a lot better. @DaveCozy @zephyr1

I have almost all of the current regular heroes as an album, that @zephyr1 is gradually trying to get up online. Part of that is making sure that we have everything together, so that we’re not having to post updates immediately after

. The costume heroes are the next step in that, to have the same format as the Guardians heroes that were just posted.

On this @zephyr1, is there plans to make like an index?

@Lumi Okay, when I get my remaining emblems for Hawkmoon I will provide a pic and after work I will grab the Brienne one. I am gonna give both original and costume, and also just an fyi, my Brienne went the defense and hp route so my regular Brienne will be showing that route. I gotta look and see what that translated into her cleric grid. 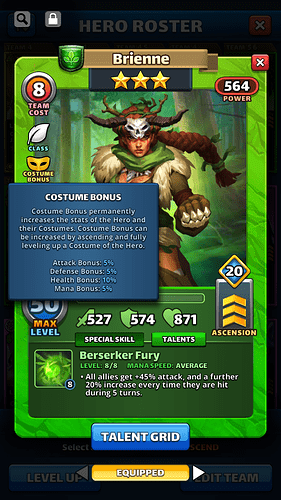 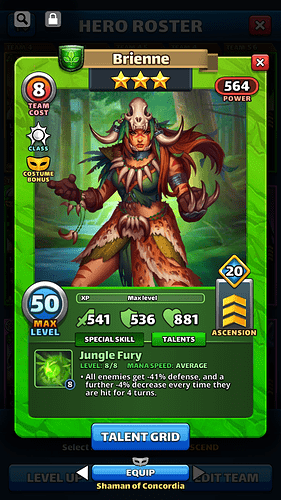 I will get the Hawkmoon one up as soon as I get her last node filled.

EDIT: The druid tree was defense and attack that I ended up going down, and that translated to the attack path for the cleric side.

where can i find the ascension material chart for the costumes?

Maybe you are leveling the costume on an unleveled Lianna and that way the game does not let you ascend the costume to tier 2 unless you ascend your Lianna first. It is much cheaper to level and ascend a costume than a hero and if that rule did not exist it would let everybody have maxed 5*s with only spending 1 AM each. So if you have a maxed Lianna already, level the costume on her, and if you dont have, level the hero first and only then the costume.

Well that kinda sucks but thanks man I appreciate the feedback

On the classic I can’t tell what the symbols are on the 2nd line. I don’t want to guess?