There was at one point… This from e&p wiki … 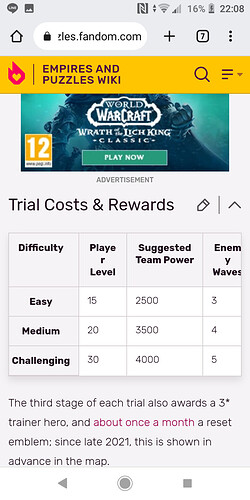 I don’t really remember that. Of course, it could be that by the time I had a roster that could complete the challenging level, I was already past that 30 level.

those of us who keep at least one of every unique hero, will see some benefits in this quest.

Not sure if anybody mentioned it before, or not, but we need to consider we’re talking mono attacks in the same color for 10 streight rounds. Mono is based on tiles. If tiles don’t come, you lose. Usually this ain’t a problem, you only waste some energy, but now, you lose one useage of that team, which might have catastrophic effects on your event strategy. And let’s face it, nobody will get 10 decent yellow boards in a row… even with double items, defeats will occur, heroes will waste away.

all tiles when matched will be converted to yellow troops no matter what colour is, so dont worry about it

All shields release Holy Troops when matched. Troops use the average attack power of your team’s Holy Heroes. 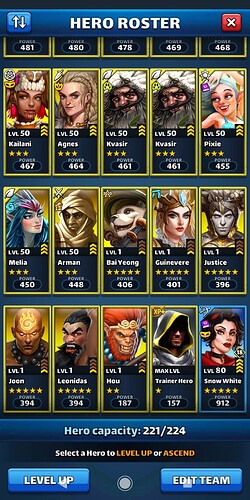 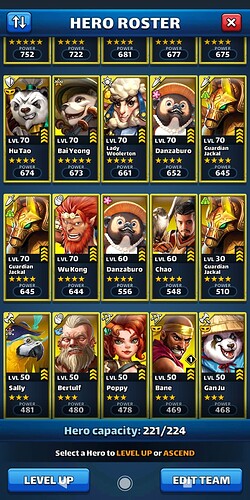 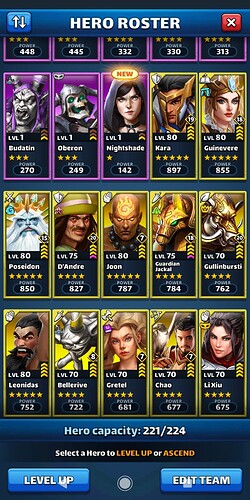 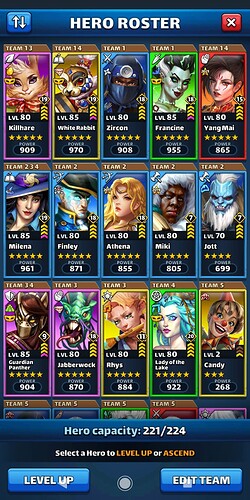 In yellow, I have

(many of the above do not have that many or even any emblems; also I’m not counting costumes because the event doesn’t, which, that seems unnecessarily stingy)

So I might just maybe have barely enough yellow heroes for this.

I am not the longest-playing player here by any stretch of the imagination, but neither am I exactly a “newer” player: I’ve been in this game for over three and a half years.

So yeah: this event isn’t just going to be a problem for “newer” players.

Yes make some events a challenge for seasoned players! Bored with events I can autofarm through. Not every event has to be tailored to new players.

And I’m very cheap to play (less than $100 a year and trending less). But I’ve played long enough to have a roster that I would like to use. We have enough events where the same 20 heroes are used over and over

I think most events are for seasoned players. Certainly the ranking high in those events are. I had to work my tail off just to get top 100,000 in the legendary section of challenge event, barely got top 50,000 in epic section. 3 Kingdom events are also for seasoned players. I participate but have nowhere near the number of leveled up heroes to place high enough more than to get a few coins.

I would just like them to be less stingy with this elemental event. Change the heroes can only be used 2 times to make it be 3 times. That would still give a big edge to long time players but give others at least a little chance to get things.

Agree with this. The prior game I played, there were “unique” level events you just couldn’t complete as a new player. Didn’t see it as a deterrent, saw it as a goal to strive for. Lots of delayed gratification with finally being able to complete those

I can’t remember exactly what was the rewards of this event but… If I remember right… If you miss some stages it won’t make any difference. Rewards are miserable.

All they want is you to spend in a (very trashy) 400 gems portal.

But I may be wrong. Probably not.

I don’t trust SGG to take any advise the players give to heart if it involves the beta. They just use the beta to see if there’s bugs and it works.

Similar with Ninja Tower, when i was level 3x, 4x. Not able to finish all stages due to lacking of hero. But let’s enjoy free loot and stages and let it be

BobTheSnark is exactly correct. I am also not the most experienced by a damn sight, but I’ve well over two and a half years in the game with a level in the upper 70s, and I flat-out do not have enough heros to complete it.
In yellow, my roster is:
5*: 6 fully levelled (4 with emblems, one is LB) and a dupe Leonidas at 1/1 who I’d intended to put in line for HA10 or SE
4*: 8 fully levelled (4 with at least some emblems) and two 4* trainers I’d been saving for a good draw
3*: 5 fully leveled (Kvasir is LB)

Of those, my only group healers are Vivica and Woolerton, with Anastasia and Kvasir able to summon minions as health boosters, so there’s no guarantee I’d even make it through a given stage. Even if my currently baking HA10 or one of the portals is generous to me in the next three weeks – which would frankly be inconsistent with my draw history – I’d be using Tier 1 5*s flanking Gan Ju for the first couple rounds.

The “funny” thing is I actually like the “actually using your otherwise benched heroes” mechanic, but this is not workable. I’m hoping to make it through level 7.

For all of you that don’t have 25 heroes, are you going to level more three stars in the mean time? I’d say I can generally level one element in a week or two. We have a month to prepare for one element. I’m guessing two for green and at least three for all other colors.

I said three stars as they’re the quickest to level but might not be the best answer for everyone and might not get you to 25. I’m I’m curious how folks have been adjusting since the beta announcement. That original announcement was about a month ago. How have priorities changed?

Maybe we can also use 1,2 star or trainer hero + battle item to finish early stages

I don’t understand why everyone complains so much about everything not being able to be completed by NEW players. As with any game it’s about playing, gaining the experience, equipment, etc and progressing in the game so you CAN do the events and quests such as this.

In my opinion, they could always do 2 difficulties like this, and allow “new” players to participate in shorter and easier ones, and then the more advanced/experienced users do the “normal” one like this.

If everything is made so new players can finish, then what is the point of it for those of us who want/need a challenge? It makes us get bored and move to something else. It’s already boring farming levels over and over, it would just be that same feeling, which would be too tedious and boring.