I need a confirmation Button or a seperate screen for building my war team without constantly having to avoid the Fight! button so this doesn’t happen. 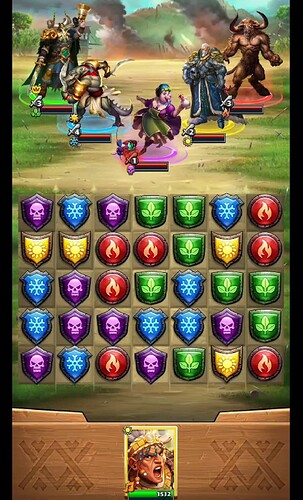 When no heroes are selected the Fight! Button doesn’t appear. As soon as you select one hero the Fight! button appears. But who would ever attack in war without a full team selected, much less only 1 hero?

I was trying to push the Enemy Info button when my phone shifted and the base of my thumb accidentally hit fight button. Leaving me to fight 1v5. So I have some things to consider and a few suggestions.

Things to consider:
•The Fight! Button is in the bottom right hand corner near the edge of the screen.
•85%-90% of people are right-handed and most people hold their phone towards the bottom to support it considering we live on a planet with gravity.
•Phones come in a variety of sizes. For some phones like mine, the large size of it makes it harder to hold on to and bigger screens make the buttons bigger as well and give them a larger surface area of activation. Smaller phones come with a smaller surface area but one fingerprint covers a higher percentage of the screen also making it easier to accidentally hit the Fight! button.
•Up to 29 other alliance members in war are relying on you and it sucks to potentially lose a war due to bad button placement.
•While human error is unavoidable, it can be limited.

Screenshot_20221231_120030_Empires1080×2400 252 KB
Pretty simple solution to keep the attack button inactive until a full team has been selected. Just like setting a war defense in which the system requires a full set of five heroes to be in place before registering a defense for war.

Screenshot_20221231_120122_Empires1080×2400 212 KB
After selecting team and pushing okay, I feel like it should bring us to an attack overview/review screen equipped with the Fight! button. This way players can focus on building a team and not accidentally hitting a button.

Last suggestion would be to add a confirmation button when a full team is not selected or simply use any combination of these three ideas.

In this case it was my fault I accidentally hit the button, but I can’t help but think how easily it could have been avoided.

I’m really sorry I’m out of votes, this situation has never happened to me but I’d be gutted if it did.

I would vote if I could.

Absolutely - Good idea, it would benefit everyone and I cannot imagine who would argue against it.

I think I’ve done it one time before and it was 3v5, because I have a Galaxy s21 Ultra and even with my man hands I still fumble it every now and again. I mean we’ve all dropped our phones so we can understand that concept. It just seems so silly to me that it can even happen in the first place. I would actually even take it one step further and not say to implement this change not only for war, but every war type format like Raid tournaments, W3K, or any other format that could possibly affect teammates in the future. I could care less about a raid or something like that that only affects me because that’s no big deal. So I’m really hoping that it’s as easy of a fix as I feel like it should be.

Luckily I ended with a standard 4/6 and my alliance did win the war thankfully!

It’s a simple fix from the devs really.