Is Rigard just better? Aeron is a bit tougher and more HP but his heal is over time compared to immediate 42% heal plus Aeron only dispels status ailments from nearby heroes… I’m also looking at the talent as Rigard has mana shield (fantastic against Guin tanks with alasie or Zeline or Gravemaker or Hel etc) where Aeron just resists ailments by himself, much less useful, and more expensive to activate his talent. Is this an example of a good 5* hero who is just outclassed by a 4* hero, even though he is good? I’m not sure if his extra defense and HP is actually worth all the mats to ascend when I could just have several rigards instead. Anyways, feedback and opinions about these two pls

To me Aeron’s special is stronger, even if his heal over time is lower than other healers and his cleanse only affect 3 targets and by having more stats you’ll have a better hero.
Status aliment’s immunity is also damage prevention.

Aeron is definitely better, but a Rigard with a maxed talent tree would probably be a better option in allot of situations to a maxed Aeron with no talents. The stats make a really big difference. 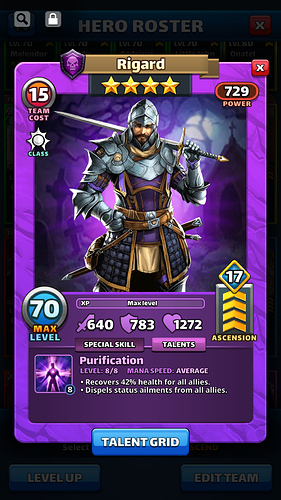 I still think that Aeron is better

I prefer Aeron, since he prevents incoming status aliments, where Rigard will only clear, if the status was already bad.

Simply bring both to keep you absolutely clean… 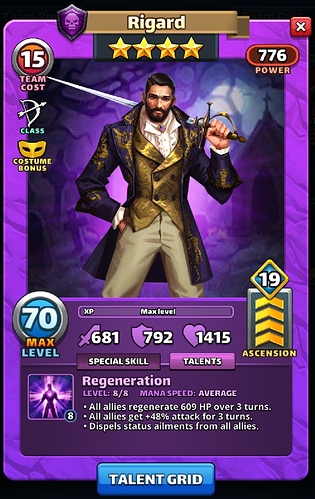 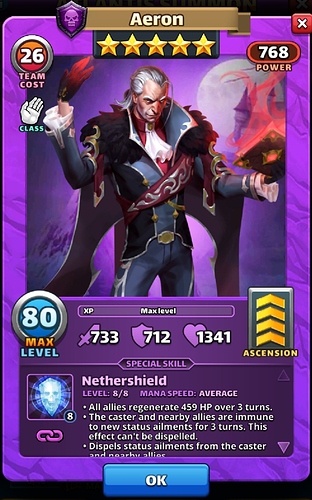 Edit: added +7 Aeron. This gives him same amount of emblems as my Rigard. 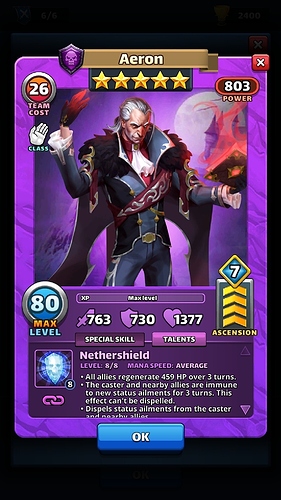 Aeron still has a slight edge…

Except that you can get 95% of the hero for around half of the investment in mats/feeders.

If you had levelled neither and had other options, there would be a serious question mark over whether Aeron is worth that extra effort.

Emblems make the comparison tricky: yes they boost Rigard, but as a 4* they go much farther with him. Rigard+19 would cost a bit less than Aeron+8. If it were my call, I’d use Rigard, bench Aeron and give the 4* mats to someone else.

Wouldn’t an equivalent to Rigard +19 be Aeron +7, not Aeron no emblems?
Aeron +7 uses approximately same amount of emblems as Rigard +19 (slightly less actually).

Edit: on defensive track (I used Titan Mafia for this)

Just use both. Problem solved.

He still only cleanses 3 while Rigard cleanses all. Rigard’s heal over time is higher plus he gives all allies +48% attack. Costume mana bonus makes Rigard a possible fast hero. 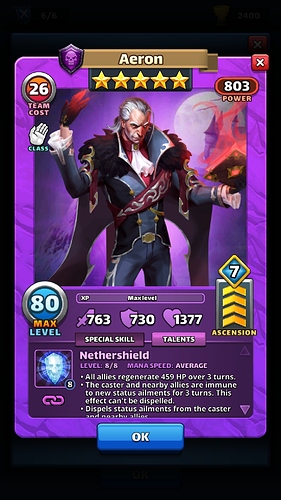 Oh, and I forgot to mention that constumed Rigard is still allowed on 4* Tourneys. That’s the biggest advantage that he has in my own opinion.

Yes, all true but I have a soft spot for Aeron as my first ever 5* and first maxed 5*.

Plus, according to the Empires and Puzzles wiki he is the most average 5* in the game

Heroes form the teams that you command in Empires& Puzzles. A full team consists of 5 heroes. Hero quality is proclaimed by the number of stars beneath their name and varies from 1* up to 5* (5 being best). Every aspect of a hero may be upgraded...

Edit: this would mean, incidentally, that half the 5* in the game have worse stats than Aeron.

To be honest, I’m jealous that I did not get any featured heroes during my atlantis summon a day ago. If I had pulled Aeron, I would have ascended him as my first purple 5*. The truth is, there aren’t many average speed 5* healers. Only Delilah Aeron, I’m not counting Aeris and Guin.
For wars, you need more healers like Aeron, I can’t make another Rigard like that.

Aeron is a good hero, not great but certainly usable. And I do use mine, all the time.

Rigard is a great 4* hero that the costume makes into a great hero period. Now – if I could just pull that costume … I have 3 Rigards waiting for it

The problem with Aeron is the cost vs value thing.

It brings some value to the table but at a very high cost.
On the other hand rigs value is high and cheap so you can benefict of him . Rig is like a safe bet

True, you can probably max two Rigards just in the time to max one Aeron. And the costume doesn’t take that much longer. I maxed Melendor’s costume in under two weeks without even trying hard.

Plus the mat cost.

I made this post before costumes existed. Now that Rigard costume exists, it’s not even close. Aeron is not worth the tabards. Not even ALMOST worth the tabards. There’s so many important purple 5*, Aeron just isn’t one of them. The only thing you are getting for your tabards comparing Aeron to costume Rigard, is you get a slightly higher attack stat. On a healer. That’s basically it. Aeron prevents ailments on himself and 2 allies I guess. But the ailments that are really the most debilitating are DoT. So really, Rigard costume covers that anyways. His HoT is higher than Aeron. He cleanses ALL allies instead of just nearby. He gives a rare attack buff in purple, khiona is the only other purple hero to do it. And he’s fast mana. Give him a lvl5 mana troop and he charges in 9 tiles. It takes a lvl23 mana troop and a Damascus blade and a tome of tactics and 6 tabards and several million more food to get a far inferior effect from Aeron. You don’t even need to max a Rigard to get the costume maxed. You just need to take Rigard to tier 4. Ascend the Rigard, leave him at lvl1 at last ascension, max the costume, boom you have a 5* hero. It’s crazy. I seriously want my tabards and stuff back from the Aeron I maxed. I could max a second Seshat instead. I even have a lvl23 purple troop, and I just don’t even want to give it to Aeron when I make attack teams. I would give that troop to Hel instead on my purple team. Aeron is essentially slow mana to me. I don’t even use him. I just use my duplicate Rigard costumes in war teams, it just takes lvl5 mana troop to ride him to victory. Aeron sits on the bench.