They are even more boring than feeder wars itself…

I’d perhaps suggest that you flag the relevant topics as ‘other’ to the mods and make your case to close or merge.

No, I wouldn’t abuse flagging for my opinion, since nobody will be harmed by those topics. They are just annoying and momentarily seem to overshadow real issues, serious problems and questions.

Although with the costume chamber being delayed, the topic of discussion may now move to complaints about that

Edit - I was so right

No, I wouldn’t abuse flagging for my opinion,

That’s no abuse of flagging at all, the posts don’t get hidden and there’s no negative impact on the other users, it’s just a way to express an opinion to the mods. I do it reasonably often if I think a thread is getting too spicy without raising tension further.

Anyway, that’s just an FYI, you know your stuff anyway

I’ll go make a meme or something productive 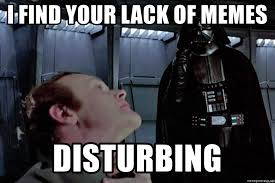