Cheshire Cat has not the same CS in defense

Hello all. I was confronted in raid tonight with a Cheshire Cat. I have this hero, and the card says “deal 228 poison damage for 4 turns”. It may not be the exact wording, as I’m French. My Cat is 3/60 with a CS level of 8.
However, when the opponent’s Cat actived, I noticed my heroes were loosing 100 life at a time! I checked the opponent’s card by taping it, and his cat reads “deals 400 poison damage for 4 turns”.
Both Cats at CS level 8 should deal the same damage, it’s not a percentage but a fixed amount.

I’m really sorry but I can’t provide a screenshot of the raid, I can’t tap a hero and take a screenshot at the same time.
Here’s my cat, though. 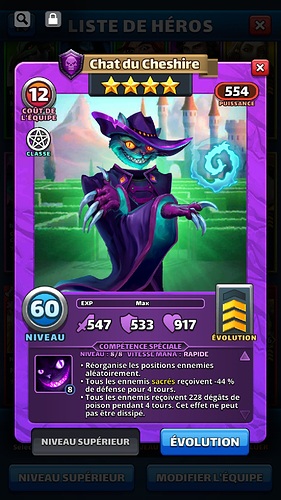 That’s because the heros attack stat affects the amount of DoT they apply. Troops with attack bonus increase that number as well.

Raid defenses also get a +20% unpublished attack bonus as well.

Thanks for the quick response.
I stand corrected, I thought those fixed amounts were not related to the hero stats.
Interesting, it is a huge difference, I think I’ll max it out, then.