This is how war scores are calculated

Calculation of Alliance Wars Score – what is War Matchmaking based on? Do trophies, Titan score, or alliance score count? [SPOILER: No.] Gameplay Help & Tactics

I have listed what we know about how the war score is calculated below. Can you tell us in more detail what you mean when you say stronger opponents score more over weaker? This doesn’t pertain to war score, so are you talking about raids? War Score: The best 30 heroes in hero roster of each Alliance member opted in for war Out of the 30 heroes, the most weight is put on the best five heroes of each Alliance member Player count of the Alliance (also subtracting those who have opted out) - t…

Don’t know how to edit, sorry I posted name. They kept saying we should trophy drop so we could win.

No worries. @Kerridoc, @Zephyr1, or @Rook can help here

They were just trying to rile you up with what they said. Trophy dropping has no in-game benefits beyond being able to fill your Wanted: Heroes chest faster.

Sounds like a really frustrating loss, and like your opponents were behaving like real jerks. I hope your next matchup is a lot better and more pleasant.

They kept saying we should trophy drop so we could win.

They may think it has something to do with the match ups, too.

No matter how many times it’s stated, there are plenty that STILL believe cup dropping gives easier war matchups.

No matter how many times it’s stated, there are plenty that STILL believe cup dropping gives easier war matchups.

I would go so far to say the majority think this.

As @Garanwyn said, the only benefit to trophy dropping is to fill hero chests faster. A few of my alliance members do that and I don’t discourage it, because in the grand scheme of things, trophy count and alliance score don’t matter unless you’re trying to reach a higher ranking. It has nothing to do with wars, though. The only thing that matters in a war is scoring more points than your opponent, and the best way to do that is by making sure that every member has at least 30 heroes, that they use all war flags, and they use them wisely.

I’ve said it so many times
I believe it is fixed from the start
Or has it never happened that Many alliance members get completely crap boards and opponent all 1 shot kills and viceversa as long as you don’t loose all the time it’s win some loose some and that’s ok !!!
So with the first few hits I can usually tell which way the game decided this will go and take it more or less serious !!
dropping cups is pointless just that you get less from hero chest same as people who put a weaker defence team to revenge easy lol cowardly !!!
Ohh and btw I fill chests fine without dropping what’s the fun in fighting without a challenge !!

Here’s a pixelated version of that pic: 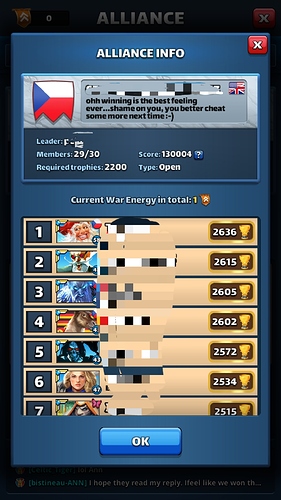 No worries. @Kerridoc, @Zephyr1, or @Rook can help here

I removed the images, thanks!

TY, thats very sweet of you to say. We do not trophy drop nor try to cheat in any way. We like to have fun.
Yes, I should have been the grownup here and just ignored the banners they sent. But my teammates were very frustrated.

my teammates were very frustrated.

Don’t let your opponent have the psychological advantage!

They were purposely trying to throw you off your game. We have fun with our banner during the wars. On the rare occasion the opponent gets immature, or too serious with it and that’s when we simply change ours back to our normal description and ignore what theirs says.

TY for removing images, did not know how. As I said, I should not have let them goad me into a war of words. You guys are great here. I have had my alliance
Justice Southern Style for over
2 years and we have a lot members been there since I started alliance.
We just want to have fun with war.
TY all for the helpful information.
Have a Blessed day!

I think one of the prime reasons for this is that whenever a war matchmaking happens and a person clicks to see the opponent the first thing that catches the eye is the alliance score. The problem is that majority players never click that small ‘?’ to see more details. So the moment they see it is higher than theirs they get demotivated.

I feel that SG should put this info somewhere in the war tab or the war tutorial so that this confusion stops occurring. I also feel they should also give a summoning tutorial to new players where they show the probabilities of the possible summons. I feel this will lead to a lot more transparency and less rage quits or demotivations.

I think one of the prime reasons for this is that whenever a war matchmaking happens and a person clicks to see the opponent the first thing that catches the eye is the alliance score.

For a very long time the alliance score was the main factor in the match making, so a lot of alliances/players got into the habit of using it as a basis for comparison. Some alliances/players never did see the updated information and are usually surprised to realise it’s been changed.

I agree there should be a better way to make this information prominent. In the meantime, it’s become the responsibility of the forum community to help alliances/players understand the new match making system.

Hopefully it can be done respectfully. There is no point beating a person up just because they are acting on old information.

Well, I didn’t mean any disrespect to anyone. I have been playing for only 6 months, so of course I have no idea how old war matchmaking used to be done, and I am sure there are many like me who have started playing this game within this time. I merely suggested that the main reason players don’t get to know about the alliance score because it is hidden from plain sight instead of being prominently displayed somewhere more visible like the Alliance War tab. Anyway, I apologize if my comment seemed rude or disrespectful to anyone.

I didn’t mean any disrespect to anyone.

I should have been more careful in explaining that this comment wasn’t directed specifically at YOU.

It was just a general comment that too often players mention/complain about the alliance score differences and then they get slammed.

I’m just saying that ALL of us should be more patient in explaining that the system has changed.

Hi, I am a leader of CZ MORAVA, your opponent team.

I guess the member who left took his points with him…

It’s very childish to flame each other in the banners. If the opponent was the better player and won, then take it and move on to the next war. Trophies do not count in matchmaking, so there is no apparent cheating. And they probably put that in their banner to mock you with your own words.