Can't purchase anything anymore because i'm in the region Belgium 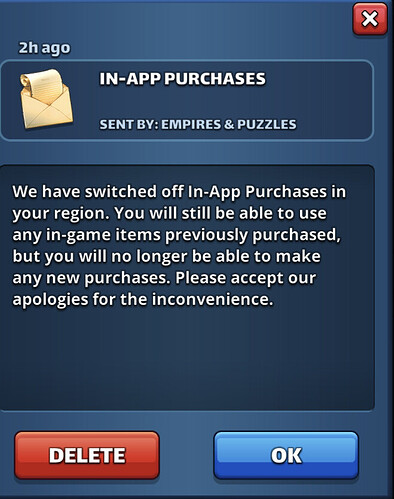 I don’t understand why.
Belgium isn’t at war or anything.
This really is a bummer.

Can anyone help out with this?

Maybe SG is adjusting the prices, and that’s why it is turned down ?

Someone else mentioned it might be cause of a new “loot box law” in Belgium. Several other Belgium players reported the same issue.

That can be also a reason.

I would like to know if this is temporary?

Maybe the belgians woke up and banned loot boxes?

If it is due the law, then it will be most likely stay this way until the law is changed.

Maybe SG is adjusting the prices, and that’s why it is turned down ?

it’s the same price for all europe

That can be also a reason.

loot box’. Mean by this, the possibility of buying secret content in the game for real money. However, the purchase of content that is not known in advance for real money is similar to games of chance, such as in the casino (which are prohibited for people under 21 in Belgium).

If that’t the case. Belgium is becoming a dictatorship in my opinion. I do what i want with my money, period.

the law has been tightened this year

do what i want with my money, period

No, you don’t. You only do what the law allowes you to. Of course, you might put on a cowboy hat, disregard the law and see where that leads…

Though this will prevent you from using Google Play or Apple Pay credit, as those are region locked.

And VPNs are technically against the ToS, so you have some risk of being banned.

Ooooh, could this be a work around hiding all those loot box - adds from being all over the place covering your base? Just set your location to Belgium?

But if i drive to the Netherlands(which isn’t that far away), i can purchase things. This is nuts.

If this is regarding Loot Boxes Laws, UK and other countries have the same (fe). And if SG keeps it this way then fines will come later on their way.

This happened on Steam as this is considered a Gambling Box.

No purchases will be allowed in several countries soon if SG keeps it this way.

My guess is indeed that this is about the loot boxes law that has been tightened in Belgium.

All Belgian members in our ally are affected by it.

@Petri
Why is there, again!, no communication from SG?
Only in the announcement section a mention it is turned off…
You are dealing with customers, not atm machines… So once again I ask you to start communicating with the people that pay and make money for SG…