Can you solve this E&P board Puzzle!

I would move B6 to A6, that will create a combo of atleast 10 tiles if not more.

And I guess a 4 yellow tile too

I concur. Give’s the yellow 4 the 1.1 bonus, gives a dragon, then that yellow dragon blows with the other yellows in 2 and 4.

I like A6 to B6. The green 3 will charge Zeline and combo into a blue 4. It then has a 1/4 chance (dragon appears on A5) to combo into a yellow 4 and a 3/4 chance (Dragon appears anywhere but A3) to allow for a yellow diamond centered on D2 in the next move. Since the one tile hitting Khiona will charge her special, Zeline will be able to dispel the fresh buff instead of letting it be replaced.

I don’t believe the question was about how to best play this board. If it was then I would probably agree with you.

Fair. My move has a chance at 3 combo 11 tiles which is higher than the OP’s, though not guaranteed.

I’m reasonable]y certain that the dragon always appears in the place of the tile that created the 4-match. If it’s as a direct result of your move, thatntile will be the one you moved.

I’m happy to be proved wrong about this.

What if the 4-match isn’t the result of a direct move? In the OP’s example, if you swap B6 and A6, it will create a green 3-match. Then, 2 blue tiles will take their place in A5 and A6, creating a blue 4-match in A3 through A6.

When I indirectly create a 4-match like this, I’m never sure where the dragon will form, it seems random to me that it could be any of the 4 spots in A3 through A6. Just wondered if anyone else had noticed a pattern, or if it truly is random

Edit: @kerridoc I completely agree with you about the direct move. It’s always the tile you move to create the 4-match

Yeah that is what I’d do as well. Here’s the reasoning:

Green + cascade of a good number of tiles (color less relevant) + high up the board, basically closes the deal here.

I would create the blue diamond and get 3 green tiles to drop by moving B6 to A6. Next move would probably to set the created blue diamond itself off, dropping all the rest of the remaining blues, and hope the new tiles create enough of a cascade to take out Ares.

Swap 5A and 5B. That creates your blue diamond, matches the 3 green, and sets off a high cascade of tiles.
Switching 4B and 5B also gives you the blue diamond and sends 4 strong tiles into Ares, but not as much of a cascade

Definetely i would do A4 to B4.
The diamond have 6 tiles insted of 5, and gives me better “vibes” from it as it is more central.

I vote with @Elpis for A4->B4 which drops 5 blue tiles on Ares, plus the green column and sets up,a blue horizontal match-3 in row C if you don’t want to pop the resulting diamond immediately.

There’s an argument for C1->C2, dropping four blues down column 2 and putting a blue dragon at B2, followed by A4->B4, creating the blue diamond and popping the blue dragon. Alice is now charged, and Zeline and Greg have 4 tiles of mana.

How about this one from my Alt. Should be able to do some great things with those red tiles right? 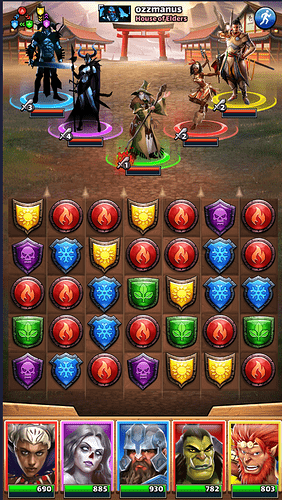 Not a great move, but i probably switch the blue and yellow tile from B2 to B3 hoping it pops another red tile.

That’s what I was thinking too. You’ll get the 1.1x on the red match, and a red set up on mel…