Can we sell all these titan parts back to e&p for gems?

Alliance members should be able to throw titan parts into a blender to create a Frankenstein, which if killed, drops crazy 4* ascension mats.

The Titanium Shields are amazing if you want to do crazy amounts of damage on a titan. Expensive but I will use them from time to time to make sure I meet the average titan hit requirement on my alliance if I am falling behind

This. On my weaker Titan colours, on rares, I use three or four shields per hit. Use three unlevelled one star feeders, and the common villagers troops that they were giving away with v28.0, target shield on middle hero every four turns, and try not to stun. Get hits between 50 and 70k.

Definitely has its place, and isn’t expensive on Titan parts either

You can also use an unleveled Wilbur / Kailani / Gunnar + Muggy to turn your 1* feeders into muggy bros that have even further lowered defense. I usually get 70-90k per hit with that method but need some additional mana pots to get wilbur and muggy going at the beginning of course.

When you’re getting your trash kicked in Hard Mode in the latter stages of Season 3, you’re going to wish you had something like this…

Really? I have a couple of heroes killed so far in season 3 Hard but nothing that would put me away from victory… What team are you using?

HotM in a bottle

Hunters lodge is one of the most useless buildings in the game so far.

I use more harpoons, titanium shields and panacea against triple seasonal bosses/ class quests than titans.

Never have enough of the correct titan parts.

If I Recall correctly, most of my accounts have much fewer 5* HotM than your main account.

Though harpoons are awesome for titans.

I might actually build Alchemy lab if it requires titan parts instead of gems.

Having thought about this for 5 seconds, that is a terrible idea.

I wish Alchemy Lab broke ingredients/ farmable ascension items down into iron, or let me transform food to iron.

I’m doing decent in Season 3. Falling back on 1* Antidotes and 2* Healing and Mana Potions without losing any allies…for now.

What I’m talking about are the much later unreleased realms like Helheim, Muspelheim, and Alfheim where the challenge in Hard Mode is going to be UNREAL–far more difficult than anything you’ve seen from this game to this point where what you’re crafting in the Forge isn’t going to be enough to keep your best heroes from being wasted.

Ahhh, I thought you were talking about the ones that have been released already.

I still use forge items for both events and titans

I don’t use hotm in events outside of fables

Granted I’m 1 person so guage usefulness of hunters lodge based on me alone is obviously too small of a sample, none of my teammates are usin them either, and I’m not sure i get why others would use them as they’re way expensive on resources and accomplish what our forge items already accomplish

I guess if some players find em useful, kudos to them and glad they help, i think what I’m sayin is i just wish the cost of poons to get the parts had a better return for everyone

I guess if some players find em useful, kudos to them and glad they help, i think what I’m sayin is i just wish the cost of poons to get the parts had a better return for everyone

I almost interpreted this part to mean something else.

Changes to harpoons were suggested be some beta testers including a good friend of mine ( see notes ).

Ok but if they’re not absolutely “needed” then why bother with the extra cost?

All i use in events are mana pots; axes, dragon attacks, bombs; arrows

That covers all 3 tiers.

Now sure i do board farm for better ranks and i do stack mono for better scores, but I’m positive that world energy is cheaper and easier to come by than titan parts along with the excess cost of the hunter lodge items

I have started a f2p alt, guess I’ll see for myself how necessary hunter lodge items are to complete events at some point

The increased loot by poon is a good idea though

Haven’t even built hunters Lodge, this point in time I don’t need it maybe in the future I will.
Could put titan parts into a machine pay some gems plus food n iron wait a week and maybe get a set of gloves

Ok but if they’re not absolutely “needed” then why bother with the extra cost?

I have not needed Panacea in a long time.

Some in Beta suggested Hunter’s Lodge should be available earlier - like Barracks at Stronghold 11 - since Elder players with 3x rainbow 5* 4.80 ( total of 15x heroes) do not need them ( looking at you Hunter’s Caltrops. See Puzzle Combat also by SGG ).

Consumables are a constant problem with MMO. One solution is to replace charged items ( like Empire’s battle items ) with duration items.

Example
Instead of each Dragon banner lasting 3 turns, each lasts 48 hours. After it expires you need to craft another.

Before each battle you can select 4x of your currently active items.

Another is to power battle items with mana instead of a limited number of charges.

So the item is not consumed, but must be crafted and used instead of a hero’s normal attack.

Except from SGG’s implementation of Costume chamber, and Alchemy lab, any focus item would probably be more like Danzaburo, or Rumplestiltskins, special ability ( see D&D Wand of Wonder ).

Several RPGs have items, or heroes, that use 100% of their mana bar, but give all allies, except the caster, X% or Y shields/ tiles/ matches of mana.

You could theoretically combine the two for a 48 hour item powered by heroes mana.

If Empires ever implements trade ( unlikely) Elder players could trade 1* to 5* battle items they do not need for ingredients/ battle items/ ascension items they actually need. Supposedly Alchemy Lab was supposed to help with this problem.

Alchemy Lab and Hero Academy will do something about that. These are are parts of the Stronghold Upgrade. Because they are very doable. Trading has some things to solve, and we are super-busy with all the other things we want to do inside Empires & Puzzles. So because we wanted to get something this year that addresses some of these issues, that’s why we’re adding these buildings.

Farm during Atlantis like crazy, and then farm a little more. Make as many Tornadoes and Time Stops as possible… And you will never need anything from Hunters Lodge.

I’d be happy to trade 10 titan parts for 1 backpack.

Why use harpoons if all you get for them is more useless titan parts? And you burn ham and iron

I know titanium shield are very useful against rare titans. So levelling the HL to at least 3 is a great idea. Unfortunately for me, I never have iron

What does that cost in materials? It must be nuts! Is it a remotely sustainable option or is it just for rares (Titans)?

Too rich for my blood, that’s for sure. 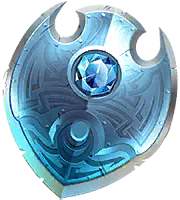 It’s just for rares really, the ones you struggle with mainly. It’s a downgrade in damage for normal titans anyway. I wouldn’t use shields on Blue or Purple rares either. At least a decent option if you’re out of Tornados.