Got this message: [Image] I don’t understand why. Belgium isn’t at war or anything. This really is a bummer. Can anyone help out with this?

Heard a rumor with fated summon release that Belgium would be open for the store again, rather than speculate figured it would be good to hear from players OR SGG for those impacted in that region.

There is a easy work-a-round. Use VPN and the ads are back.

Use VPN and the ads are back.

Use with caution. This may be considered a violation of Zynga’s TOS. 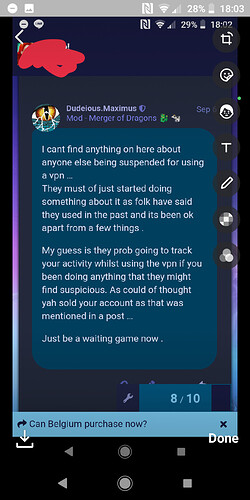 So to summarize; we could use a vpn to purchase, as no foul play is involved but there is a possibility that our account might be temporarily suspended?

Anything Zynga is working on atm to avoid this?