There’s a Bug where Alexandrine only Heal Heroes who’s not on Fully Health. I think he supposed to heal other Heroes like any other Healer even the Heroes are in full HP.

It’s not so important… But it is when they got a Stealth HP Ailments and in full health, then Vanda or other Heroes that steal HP won’t get any benefit from that cause they won’t be healed.

There’s a Bug where Alexandrine only Heal Heroes who’s not on Fully Health. I think he supposed to heal other Heroes like any other Healer even the Heroes are in full HP.

I am sorry, but I don’t understand, she is not an overhealer (like Heimdall or Gullinbursti), so she cannot give more health to heroes that have full HP. Regular healers indeed only heal heroes that do not have their full health.

You don’t understand what I’m saying.
Usually healer still heal even they are Full HP

It might not give any different.
But if in the future there’s a Hero that only give Stealth HP (like Vanda) without giving any damage to Alexandrine team, and he skill… ( that Heroes won’t get any Stealh HP cause there’s none 0)
But with other Healer, he will get HP cause they still heal regardless of Max or not HP 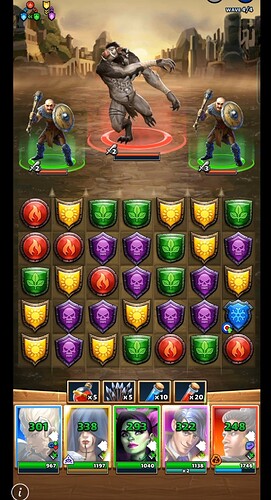 Ok, I got it now, thanks for explaining to me further.
It might be though just a visual bug. It should be investigated further.

I have had this happen to me and re-read the card immediately after I saw her only heal two of my heroes! I thought it was a bug as well. I don’t have her fully maxed yet, but the card does say she recovers 11% health for all allies and an additional 3% per each Ice shield on the board, up to 35% health in total. I think it has something to do with the elemental link instead!

I think it’s because of the new update.
Director Zuri also did the same. She won’t give any heal to Heroes who have Max HP.
Still don’t know if it’s just visual bug or it is intended.