Good morning.
Today we started the war with one person less then our opponents. We had a member that was excluded of the war with no reason. She’s very upset with the situation and all the rest of the members because we will have less 6 attacks in the war.
My alliance is BSB Nova Geração I.
How can we solve the situation?
Kind regards
Paulo - Skelletor

Did they have a full team on the field before war started? As if there wasnt they will removed from the war.

The same here… 3 wars and we’ve got 6 attacks less as opponent has one ally more… is it normal or is it a bug/issue?

We had a member that was excluded of the war with no reason.

This shouldn’t happen for no reason, so let’s check some things:

If she’s sure that none of the above happened, then she should #contact-support as they can look in their logs and confirm why she was excluded.

is it normal or is it a bug/issue?

Even though matchmaking tries to prioritize alliances with the same number of members, it is rare but still possible to get matched up with another alliance that has 1 more or less member, if the war scores of the alliances are close enough.

So in other words, this isn’t necessarily a bug, it is possible this could happen.

Bah ! Even with equal or close war points between 2 alliances, the one with 1 less player on the battlefield not at their fault is aggravating, might as well throw in the white towel and signify surrender. Really, 6 war flags is 6 war flags with the disadvantaged team hoping that one of the enemy player gets inactive on war day. I wonder if this happens in top alliances. With all due respect, this is really

war matchmaking then. This should be fixed.

Dave we put her with a full 1* heroes and 1* troops. She was in the game until 02.00am when I went to bed. She is so mad that she leaves the alliance. I want to fix the situation, but SG got to help me.

My best guess is that she fed away those heroes, which took them out of her war defense and that’s why she’s not part of war when it started (since she had no defense once they were fed away).

If she didn’t field 5 heroes on her defense, then she gets excluded once the match starts.

If you’re fielding a defense of weaker heroes, be careful to not feed those heroes away. If you do, you get excluded from war.

You can tell her to #contact-support if that’s not the case though and she still has the heroes in her roster.

I will check if that happen.

Case closed. She fed away those heroes.
Thanks for your support.

I’d like this topic to be open as my case is similar but still not solved, if you don’t mind

War is based on everyone’s rosta going in, so you may be 2 people down but the bench in your alliance team is probably stronger then there’s.
People my have a strong team but that’s it nothing else in there rosta.

Since I cannot seem to find how to post an issue I chose to post here and see if anyone can help me out. In war my last three attacks some bug made it to where my team had random health from 4 to 600 (when they are all over 1000) and at first thought it a glitch until I got one hit one kill from a normal attack. Confused I restarted game after match but I did it again 2 more times costing me a huge lose in points that could have been a game changer. the one showing loading stayed that way for about 5 min after I defecated the guy with my third attack. Then it went crazy 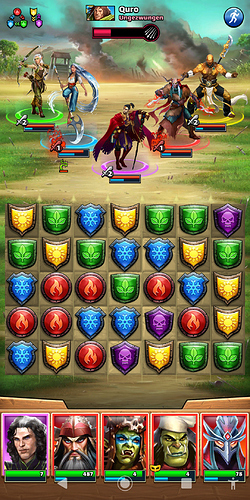 We had a person during war preparations, not field a team so when the war was live, their team was omitted from the battlefield and we were down 6 flags.