he is one of the weakest hero of the month 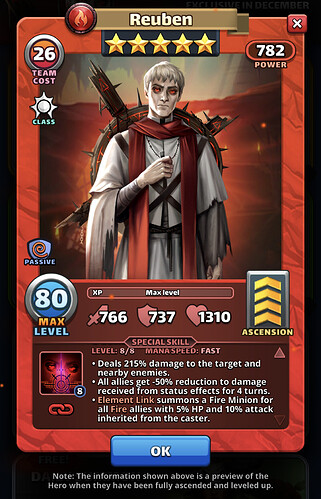 1125×1751 489 KB
Agreed. Double agreed because he is one of my favorite hero cards in the game, really love the art and how he looks, and his theme is great! Not sure double agreed is a thing, but it is now.

His secondary effect is weak, especially given that the biggest danger from DoT still comes from Very Fast and Fast heroes, so he has no advantage there. Further, Emilio (and others) at Very Fast can prevent all status effects, not just damage from them.

This wouldn’t have been a problem if his attack damage was something worthwhile and he shut down all damage.

This way he hits hard, albeit not Quenell/El Naddaha/Tethys hard, and he shuts down all damage from status effects for 3 turns. Still not as good of a special as preventing all status effects, but worthwhile when facing DoT heavy teams.

I have the luxury of a mats stockpile, and even I can’t give him mats:

Arguably the worst HOTM. He’s so bad I never ascended him, despite my desperate need for 5* reds.

I really like his look, and I ascended him even (my thought was that I had no 5* clerics, so he’d help with trials, but even there he doesn’t shine). Which means that I’ve got an expensive bench warmer at this point.

The suggested buffs would let me at least get him off the bench occasionally.

here is my suggestion for him in another buff topic

agree, please buff him, i love his artwork as well, an unholy priest

Yes, it will require a 280% boost to target and nearby enemies, -75% damage taken reduction for all allies, improve percentages of helpers and bonuses to provide extra damage to the nature element. Current statuses are acceptable…

Agree on buff, don’t have him but sheesh one of the most underwhelming HOTM ever. He helped VS a problem that was nerfed to oblivion earlier in the year and was made so weak because most HOTM after Vela/telly we’re toned down quite a bit compared to other hero sources … he got way over toned down to the point he wasn’t even good when new.

Agree on Reuben getting a buff. He sees no play and is definitely underwhelming.

I think they should have also given him his own minions that isn’t necessarily the ones related to the element link (unless they straight up give those minions increased HP & attack and have the elemental minions apply an element-specific debuff to targets hits, e.g. tiny burn).

I would love to see a buff to him. My only other Five star Fire heroes are normal Marjana, Elena and Noor.

I was so desperate for another that I took Natalya in the last SE. (Which I love)

Yet I still can’t make myself give Reuben ascension materials.

But then I look at Klaern…

Reuben had everything to be a decent hero, but his abilities were toned down and left him below average. A buff would be welcome, as already posted by friends here. I hope SG/Zynga do something about it in the future.

I’d vote for this but I’m out of votes.

Here are my ideas for a buff.

He really needs a buff. I think upping his damage to ca. 250% to three ang giving him cleanse or dispell would put him in a good position as there arent many red cleanser/dispeller.

It really needs an upgrade. This hero of the month and the heroes of the pirate event are excessively bad if they are not upgraded