Gadeirus is essentially the exact same as Kiril and Boldtusk except that he does a little damage so it makes sense to limit him a little bit but he is slow AND only extends to nearby heroes. This is too much. It should be one or the other to make him viable, not both. Plus, his healing is over time and not instant (a further disadvantage to the other two similar heroes). To make him a good, balanced hero, he needs to be average speed but only nearby OR slow but AoE. OR he needs to do more damage with his special. But let’s be honest, nobody uses him for that damage so it’s not good to boost that. 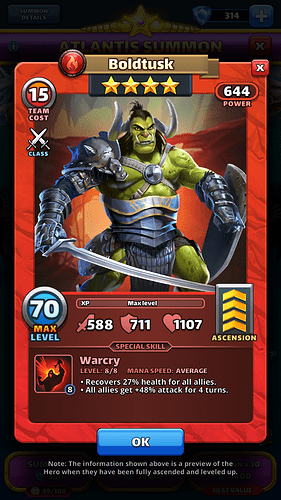 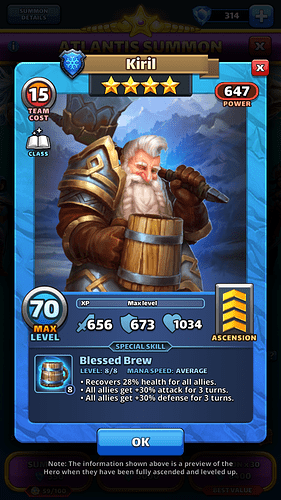 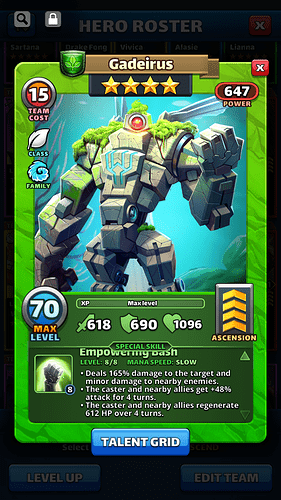 lowering his healing over time but making him fast.

He is so close to being good and desirable and yet both the specials and the art let you down.
Slow but not quite tough enough to take a load of tiles to charge. The damage is meh, the healing is ok the attack buff good. BUT slow, not quite tough enough to survive until charged and then only helps the neighbors. Kashhrek is more useful in his role, does his job better. Doesn’t hit but if he fires he is tough to take down, Gad…probably won’t fire and you can still kill him since it is HoT and no boost to defense…

Average mana and he’ll be viable (even cut the HoT a little if Average mana). Would be happy to have the other parts of the special tweaked although I don’t see it as imperative as the mana speed.

I leveled him early and struggle to find a place for him. I tried over and over to use him effectively but besides tile damage he really was a waste. Even with the family bonus running 3 Atlantis family heroes he was ineffective. He’s been benched except in wars. That is without a maxed green 5*. I was so committed I debated giving him the emblems to make him work but as is he’s incurable.

I apologize in advance for my English, it isn’t very good

Now I have this hero on the 3-46 level, active use him on the map, in defense and raids (silver-gold arena). I think that this hero must have average mana speed. In order to substantiate this statement, I will compare it with Boldtusk, Kiril and Kashhrek, and also consider various aspects of his skill

The damage from the skill of Gadeirus is not strong or decisive. I would rather describe it as symbolic. Using a hero in raids, I don’t remember a situation in which the damage from skill would be critically important for me, unless it was possible to finish off almost dead opponents a couple of times. I also noticed that the skill does at least some damage to heroes with 3 stars, but for developed heroes with 4-5 stars it does not pose any danger

The Gadeirus’s skill as buff on damage

I think, in this aspect Gadeirus lose Boldtusk a lot. Boldtusk have average speed, so he can more often buff his team. Also Boldtusk can buff all allies, not only neighbors. The only advantage of Gadeirus is its effectiveness against blue titans

The Gadeirus’s skill as healing

Gadeirus is cool healer, he can recover a lot of HP. But the main feature of healing aspect is that it is a healing over time (HOT). During this time neighbors and Gadeirus can die due to normal attacks or skill damage. In addition, there are much number of heroes, who can dispel HOT (and buff on damage) that’s why instant, but weaker, healing of Boldtusk or Kiril can be more effective in raids than more powerful healing of Gadeyrus. Also one of the drawbacks is low mana speed

The Gadeirus in the center of defense

I did not want to write that Gadeirus is a weak character or that his skill is weak, but this hero with average speed could be much more efficient and comfortable. I understand why Kunchen, Agwe, Elena and many other characters have slow mana speed. But I don’t understand, why Gadeirus has low mana speed. The damage of his skill is incredibly small, the buff on damage is the same in magnitude as the Boldtusk, but not for all allies and Gadeirus can use it less often than Boldtusk, the healing is strong, but situational, in much cases instant healing by Boldtusk or Kiril, who have average mana speed, are more effective. I like this character and I want him to be a little stronger and more versatile. I will believe that I will find like-minded people among the forum community

By the way, players have already paid attention to this moment, for example, here: Buff Gadeirus to average mana or full AoE

I just got it from last Atlantis Gate and I’m leveling up but not more tier 3 because is useful in war and his health is a bit better than many other 4* at tier 3/1 . I like him but as all of you say his useless in all perspective because slow mana.
Maybe someone can add a topic with signature and all of us signed the topic and then to be sent to Stuff, maybe they’ll do something later

Hmmm, Hi, this might have answered my question. Which is: should I add Gadeirus to my defence team as it already includes Triton and Proteus. So currently: 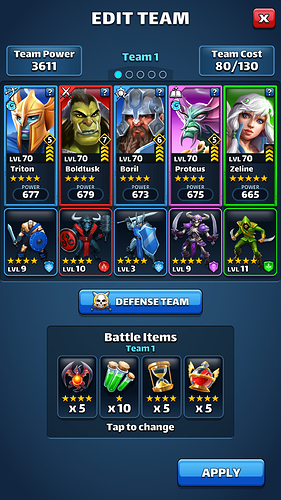 No, he goes on your bench for wars. You already have 2 +AP buff heroes. And lego man is Slow speed. My opinion

Thanks for that! Confirmed my suspicion. He’s just so cool looking, I jumped on leveling him, then pulled Kashhrek, who’s at this moment short of asc mats… I went for Gadeirus over Gobbler at the time…

As the proud owner of not one but two Gadeiruses (Gadeiri?), I would be perfectly fine with this buff.

That said, I’ve had surprisingly good experience with him in a raiding stack at 4/59 or so. Some of that might be that my tagalong to a +6 Caedmon has been a 3/70 Elkanen who isn’t exactly carrying his weight, but still. Gadeirus is decently sturdy, and I think of him as a healer with benefits than anyone who can actually land a punch. It does mean that, in the right stack, I can technically bring 4 hitters to a raid squad instead of three which is kind of nice.

If Gadeirus goes off, he can solidly reinforce the flank he’s on. He helped that wing survive a full Lady Locke cycle (with Meledor help to be fair), and he helps his teammates land a solid punch.

But he kind of depends on being able to ghost tiles ofc.

Gad is jack of all trades and master of none. Same with Buddy but at least the Budster is average mana. Both are hard to stack on teams due to only 3-wide buffs/ails which clash with buffs by better 4*’s (Wilbur, Boldtusk, etc).