Sif’s special seems to be counterintuitive.

There really is no advantage over the enemy. you only take less damage, but the enemy receives the same amount of damage dealt to you. l

To put this in simple perspective, let’s say its a 1 vs 1 (Sif vs any hero with higher HP) assuming you can only use specials, Sif will always lose.

She really does not have talent besides a high attack and Mana Boost.

Having a higher counterattack would make more sense. Even adding an attack that does 125% damage and minor damage to nearby enemies would give her a boost.

Actually Sif is designed to counter with the full incoming damage then to cut the received in half, which is why she only does 100% as opposed to the other countering heroes. Is that not how it has been working for you?

/Shucks, @CarrotSupply was too quick!

No, I tried it because that’s how I had initially understood the special, but each hit they make is countered with the same damage back to them.

Do you have a screenshot of that happening?

Because that’s not how she used to work, and may be a bug. 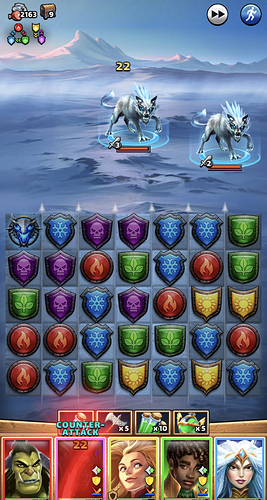 It’d actually be helpful to have 3 screenshots, looking at that:

There are screenshots from Beta of that working differently, so I think this should be reported to see if it’s a bug.

Sif is working great for me, I haven’t been booted out of Diamond since maxing her out and running her as my Tank, I couldn’t stay in Diamond before that as I have no “True” 5* tanks. I use her quite a bit and she, and the flanks, definitely only take 50% of the damage while the special is active

Not sure the OP is complaining of a bug, seems to me like a request for buff on Sif.

But it seems the buff request is actually caused by a bug. If she work properly, there is no need to buff.

I don’t have Sif, but if ever I got her, I rather have her skills as it is. I think it is a better riposte than Botil, Cyprian, Elena and Sumitumo since she only gets half of the damage dealt by the enemy but they suffer the whole brunt of the damage they are supposed to give. Her riposte makes her survive longer than Boril, Cyprian, Elena and Sumitumo as they receive the full damage dealt by the enemy.

@TemixCO7 - I am not sure why you’re facing this problem. Please provide the screenshots as @zephyr1 suggested.

Sif is an integral part of my Yellow stack… I just raided with that stack a few minutes before opening this thread. (Sir Roostley, KillHare both fired and killed themselves… while Sif and her adjacent mates stayed alive.

) Anyways, no bug as far as my experience is concerned.

Looks like there is something wrong on your picture. If Kage received 22 damage, he should return 33.

Just tested it with my Sif, should look like this:

Something is going on that we’re not accounting for.

Here’s Sif clearly taking half the damage she reflected, both from a tile, and a Special Skill in a battle I just recorded: