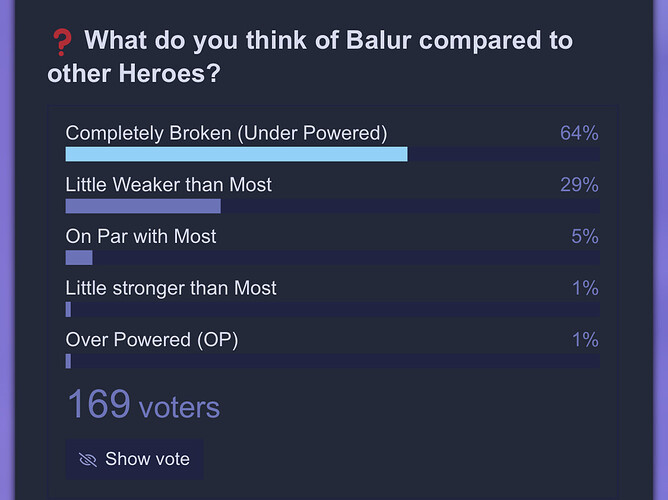 He’s an average speed 2022 HoTM sniper that compares unfavorably in most ways against 2017 classic fast snipers.

The special is even called “Double Flail” but he only hits one target. Have him hit a second target at 300% and he’s more in the ballpark.

Maybe if they change the mana speed like fast or very fast he can become usable, unfortunately I think they won’t make him stronger and most of us can’t wait to feed him on Academy

Would 100% support this but I’m apparently out of votes to give. (why are these limited again?)

His special is weak and needs adjustment.

Essentially, his special skill is roughly on par with Marjana’s or Sartana, but slower. Given that both of them are 5 years old, Balur looks really bad.

@Dorkus I’m with you on this. Even if he was made fast he’d not be better, but at least he’d be more useful

He needs a complete rework. Double flail should deal damage to two targets.

Maybe we can combine him with klaern to create a decent hero. He might be serviceable as my last string on war if he had emblems but he’s definitely not worthy of those. These hotms are weaker than base level S1 heroes. Why even offer the bonus draw if we’re just throwing them in to SE or HA? Seems like a lot of time to waste programming and designing when these heroes won’t get used at all. Glad SGG listened to their Beta testers

Unfortunately some people will not have better options so will level and use even the worst of Hotms as thier rosters are lacking.

Will already help a lot !

To much bleed? I think not. Do something to support his passive

This hero sucks. Fix him please. Thanks

Joke: Balur is HOTM in December

I absolutely support the opinion that Balur is weak … take at least Thorn in a suit for comparison, but his damage is above 500 percent. Additions can’t cover the weakness…

I agree on that, double flail could be the same as dual slash (Bjorn) or swift stingers (Zekena)

New Skill: Riposte (matches his Dwarven look and shield artwork and talent). Reflect some damage and/or cause bleed. Optionally, wouldn’t it be cool for a stackable bleed effect after being hit?

Double Flail: Two separate hits (If there is so little bleed damage at least make it not cleansable)

Passive: Boosts health by 40HP each time an enemy receive Bleed damage (could synergize with Celidana)

After fighting him in raids, he is not really a threat at flanks and as a tank he needs to be more thicc or cause trouble. Needs to be fast at wings but I don’t think his design concept suits a sniper at all.

Unless there is a severe buff, Balur is first in line for the Soul Exchange meat grinder