Boldtusk thinks he is good 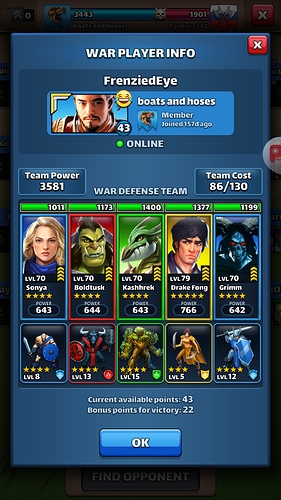 I did a bit of experimentation the other day. I put Boldtusk to the far left position (where Sonya is in the pic above) for my raid defence team for a week. I lost heaps of cups.

Then I put him on left flank for a week (as pictured above). And I gained heaps of cups.

Curious. Does his position near the middle really make a big difference or was that just a fluke?

All heroes otherwise the same in both scenarios above. 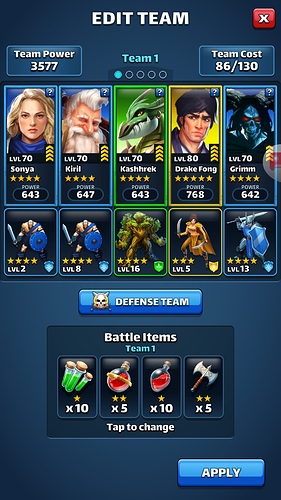 Also I’m curious whether replacing BT with Kiril will do anything (3 Ice, Kash in middle). So will leave for a week again and see what happens.

With the extra Kiril / ice hero it will be even easier to color stack against you so I think you will see that with BT you’ll have better results.

Cups come and go as the tides do, which hardly makes for a suitably controlled environment to perform an experiment like this.

I agree with Zaeres
3 of same color (and 2 next to each other) is asking for trouble.

With boldtusk in the flank position he absorbs more tiles and gains mana faster, which triggers his special and causes him to heal your team and boost their attack. He’s also a tank, so he survives the attacks better as his mana goes up. That’s probably why you got better results with him in flank position.

And yes it’s very normal for the position of your heroes to make a difference in how often you win and lose on defense.

Certainly, agree - but we can go beyond experiments too.

How about we imagine a controlled environment then?

What does your logic tell you will happen?

I agree that this is what should happen in theory, but I’d like to see someone colour stack 3 greens against Kashhrek.

It should be pretty easy to kill my left side. It depends how the board is set up.

Yes I think so!

If I had better fire heroes I would try 3 fires to completely replace the blues, that would be interesting

Yes, position do a great difference considering the sinergy of your team and their mana speed.
And i totally like more Bold on flanks rather then wings in that team, so for me it’s not a fluke but simply a better team that way.

Generally, i don’t really like let Bold and Kiril die on wings.

Ok as other people have already touched on a few things but I want to “try” to expand a little. Before going forward let’s go over a few basics.

Your team is in a wedge or “V” formation and usually the positions are referred from left to right as:

Or some similar variation.

Now when your team is attacked the ai for the game always defaults from left to right on a tie. Meaning if two heros auto attacks count down to 1 the farthest left position will auto attack first then the next farthest left and so on. This also applies to special moves! When multiple heroes earn a special move at the same time, the left most hero will trigger his/her special followed by the next most left hero untill all heros use the special if available.

So what does this have to do with placement? Well, alot of players will put a cleanser or a booster on the far left wing as to remove buffs or add buffs before any other hero has a chance to attack and this maximizing potential of the special move. This would make sense for blood tusk but as you have said you lost alot of cups by doing so.

So what happened? Alot of people don’t take into consideration that every time a hero is hit on defense, they gain some Mana. What probably happened is when Blood tusk is in the flank position he is being hit more often than if he is in the wing position, and in return getting Mana faster which alowes him to special more which has a domino effect that he heals the damage lost plus healing allies (as well as giving them an attack boost.)

With bloodtusk being kinda tanky he can take a few hits to speed his Mana along and recover quickly. When he is in the wing position this is much slower and possibly not getting his heal off often enough to keep heroes alive.

With your alternative line up you are stacking blue. Any smart opponent attacking you will see this as a venerability to try and exploit by stacking green. Since green does extra damage to blue and receives less damage from blue as well. On top of this you having two of the blue heroes right next to each other you give your opponent a chance to get alot of damage on gree matches horizontally vs a direct hit from matching 3 verticle tiles. This is far less an issue if you take this team to attack others as the defending team does not have to match tiles, so this is not an absolute bad idea but rather a possible bad choice as a defensive team.

Thanks, a good explanation.

As you already explained, by default I use boldtusk on flank because his {defence plus health} stat holds up and he gets his special off in the middle more often than on the left wing. My war defence team is set to this and I won’t touch this because after a lot of fidgeting I came to the conclusion that this was one of my best formations.

I’d like to see though if I lose heaps of cups with 3 blues. In theory, I should. But sometimes reality is stranger than fiction so I’ll leave it for a week since I have nothing better to do. I’m tired of always getting the raid chest with 2350-2450 trophies (and then falling back to 2150-2300) so I’ll just do random stuff now.

No need for me to leave the team out for a week - I was leaking trophies left right and centre.

Confirmed in theory and real life, Boldtusk is good and colour stacking in defence is a bad idea - at least not in the above setup.

Kashrek with blue flank I run 2 green 2 red 1 blue, yellow or purple as situation dictates. Double blues make it an even easier win. Think about it, if you have multiple of each color at your level then so do most other people so when you run anything but rainbow you are open to color stacking.

If we are talking about the three blue with Kashhrek setup, if I was versing my own team I’d personally use 3 red and 2 green to test the waters, and if I lost that, maybe 3 red, 1 green, and 1 any colour healer

That’s a horrible idea. The thing about Kashrek is if he goes off it’s not a loss. By having a 2 stack of neutral that is strong against his flank you can freely charge into him if given the chance while doing heavy damage to your support. A Little John and Skittleskull stack can do upwards of 250 per tile against maxed blue 5 stars, they can kill a 4 80 Alasie in 6 tiles and are very common heroes. With a neutral 2 stack that I run 2 2 1 for 90% of raids other than the occasional monochrome or 3 2. Kashrek with 3 blue leaves an entire side open to be nuked with no real penalty.

The thing about Kashrek is if he goes off it’s not a loss.

This is why I love to use Kashhrek - I’m hoping that everyone thinks like you when they raid me.

As long as Kashhrek holds the centre, the odds are in favour of the defence team.

True though that this won’t always be the case with the 3 blues in the alternate team.

As long as Kashhrek holds the centre, the odds are in favour of the defence team.

Uh, no. I pretty consistently beat Kashrek teams, even if his special goes off.

He (it?) may be the strongest 4* tank, but all that special does, is win some time. And unless the board is particularly bad, or the flanks and/or wings are particularly strong, I tend to use that time better than the AI …

I frequently beat teams where Kash goes off two or three times. It makes it annoying as hell, but in no way is it a loss if he fires.

I kill Kashrek with Colen and Boldtusk stack, he’s a pushover and annoyance at best. If you don’t get raided often it’s because people want quick wins and don’t have 2 red.

in no way is it a loss if he fires

Of course, it isn’t an automatic loss - there’s a pretty big difference between claiming it is a loss if his special fires and saying the odds are in favour of the defence team if he holds the centre.

, but all that special does, is win some time. And unless the board is particularly bad, or the flanks and/or wings are particularly strong

Yes, Kashhrek buys time, and that’s why he needs 1 good healer in support and three fast attackers. Granted my team is missing 2 good attackers, but as you’ve already said Kashhrek is the best 4* tank. I’ve never claimed he was impregnable.

I’ve claimed that if he holds the centre the defence team has a better chance of winning. It’s just a chance after all. The chance won’t mean much if the other heroes are terrible!

I pretty consistently beat Kashrek teams, even if his special goes off.

First, I’m sure you do. I also beat teams that have him and where his special goes off more than once. But I can’t claim to always beat him. Maybe 50% of the time at best, depending on the board

So do I. I kill him with Kelile, Boldtusk and Scarlett stack.

But I don’t claim to kill him all the time.

he’s a pushover and annoyance at best

Name another 4* tank that’s better than Kashhrek and isn’t a pushover.

If we compare good 5* tanks of course he is a relative pushover.