Big change in the game: Things must be based on user level

The big big really big problem is the most events and a lot of other things, the low level members cannot do and cannot complete it, leaving this people so frustrated, the difficult of events need to be based on level of players

Agree somewhat. But not entirely. There has to be motivation to progress. But events do need to be inclusive as well. There should be something for people to do even if they’re not up to the task.

I think you are on to something.

When I started the game in mid-2019, I could at least imagine reaching the top level. My first 5* was Elena, and when she was leveled up, I had 1/5 of a defense team as good as anyone at the time. Leveling her up took a while, but the time required was proportional to other game tasks.

Now, when I get super lucky on a F2P budget and pull a 5* (probably a HOTM), I need to level, then emblem, then limit break. Often a 5* hero isn’t all that useful unless it’s totally maxed, so I need to be judicious about who gets emblems and aethers. (That is, not all 5* are the same, and the easily accessed ones are quite a bit weaker than the best heroes. In fact, my Set at 3.70 is at 725 while my Elena at 4.80 is 753 - roughly the same! - and Set is by no means a premium 5* now.)

The time required to gather 5 heroes worth taking all the way up, and then actually doing so, is literally years.

TLDR: I cannot imagine starting the game now. The top of the mountain is so much higher than it once was. I hypothesize that the declining user numbers are related to this phenomenon. The people who got in early enough can keep up more or less, but those who choose to leave are not replaced by an equal number of newcomers, because the mountain is just too high.

Yup… been working on Vivica x2C for about four months now.

Then there would be no point in playing and getting stronger. Its not like some people started with 4*/5* heroes. Everyone starts with 1* and Bane

I think the game is easier now than it was 4 years ago when I started, way more chances to get pulls from events, a lot more rare and epic heroes to use. I have finished season 1 with an all rare team with full health when i killed the dark lord, originally needed 3-4 epics to finish. Quest difficulty hasn’t changed even with heroes being a lot stronger.

The gap from F2P and P2P is growing but they want that to get people to spend. Players who buy POV and VIP should end up with about 3X the number of pulls as F2P, and spending more obviously increases the gap.

I do think they should add an easy difficulty to the seasons that is 1/3 the cost but 1/4 the rewards, so you get more for playing normal but can at least make some progress early.

Not saying you’re wrong - but despite the additional content, the numbers of participating players is on a steady decline. We can conjecture why that might be, but I think part of it is the imposing climb for newcomers.

i wonder how the player decline compares to other games

I agree that there is more free stuff available now, making it someone easier who has climbed the mountain to stay somewhat near the top. I am just saying that, in my imagination, a newcomer who grasps what is required to play the game competitively will find it very intimidating.

That said, the old quests that haven’t been retired are comparatively easier, but the newer events are much harder. The new “tower” is really tough - I cannot finish it, although I finished Ninja towers easily. The new aether quests and the costume quests are much much tougher than before.

I can’t finish Styx either even though i can get to top 25 in raiding without much trouble. I don’t really care though, i spent 2 years only doing wars, tournaments and titans and didn’t progress any seasons and only got 4 legendaries in that time. I just played what I found interesting, the game is full of periods when little to no progress is made, they are just less the more you pay.

It is like showing up to a track day and the whales have exotic cars and the F2P players have 15 year old beaters. Not really competing at the same thing. The game is so different at the top when everyone has tons of strong heroes and every raid is countering their strength and hoping for good enough tiles. Below that most players are just playing their best 5 heroes because that is all they have.

I think you’re right - and to extend the analogy, it’s fun for the guys racing their old beaters at the racetrack, because they know they will never face the Formula 1 cars and they don’t care. But in this game, there’s really only one track!

I don’t want to sound to harsh, but how many F2P players are actually competing with the whales? It may be the same track but it isn’t a competition if you never actually see them in matchmaking. It is a pay to win game, it is a competition of a bigger wallet. This isn’t a game where you can get to the top by playing more, only paying more. It just is a different game for paying players and f2p is never going to have a chance by design. There are games out there that are more fair towards f2p and it would be nice to see some of that here but I don’t expect to and just accepted that I will always be a few tiers below the top.

I recently cup dropped just to check out lower level teams and at 2200 I didn’t run into any of the top heroes, mostly classic 5* with newer 4* as the supporting heroes. At my normal rank of 2650 I routinely run into teams with 3 W3K heroes, M&M and some other strong hero. The game is a lot different at the top.

All f2p players are effectively falling behind the whales at the same rate and can complete about the same amount of content.

I do find it rather discouraging after two years of playing. I wish the reward tiers were different for challenge events too. (Instead of top 1-10 etc. I wish it was top 5 % etc. instead.)

I recall when I first started, reaching Diamond raids were a goal. I saw what it required. Now I am there, but it is no longer enough, and the finishing line has moved further, and I seem to stand still. So I had to cup drop to platinum in order to make it more enjoyable, instead of fighting against all those newly released overpowered heroes.

Then I stopped raiding all together, and only complete challenge events, not trying to compete anymore. It made the game a bit more enjoyable. I opt out of most Towers, Clash of Knights etc. too, because the rewards are so little for me down here. I opt out of War, auto play the Mythic Titan, and trying to remind myself, that in Rush Tournaments, I´m fighting the board much more than the actual heroes of the opponent.

…When typing the above - it really doesn´t sound like a game that brings me fun anymore.

Time to re-evaluate? I do not know. Perhaps just time to be even more selective with what to spend time on in the game. SG mentions they care very much about our screentime. But I´m not quite seeing that.

I wish there were ways to speed up autofarming too. Like other games have. Like a 2x speed for content you´ve already done a thousand times etc.

Oh, well. One can dream.

You don’t seem harsh to me! We’re just shooting the breeze.

It’s true that in raids, a player only sees players with a similar number of cups. A newbie isn’t going to see a 6000+ team. The same is broadly true for wars, although matchups there have their problems.

However, raids and wars are only two parts of the game. There are lots of towers and challenge events and alliance quests and monster islands (the last two of which I know nothing about) where we all play on the same track, so to speak.

You’re describing me too, Gwniver. I dropped wars because they drove me nuts and put me on a schedule, such that I felt the game was playing me. I don’t do raid tournaments for the same reason. I used to like the towers, but the new ones are just too hard, so I can only complete the normal levels. No mythic titan for me. No alliance quests or Monkey island.

This is not only because the goalposts have moved so much, but I imagine that someone at 3000 would find this more troublesome than I do at 5000.

Good, I just have been more pay to play lately and maybe have lost touch with what it is like as f2p.

I´m glad to hear, I am not alone (even though I´m sorry things are like that now)

Yes and no for player level, spending has a huge impact too. Someone 30-40 levels than me can have a better roster with more of the new super power heroes… it makes it kind of difficult cause power is based alot on spend. But we do have a calculation that exists… personal war scores, that account for this.

Right, that is a good point too. I´m expected to have much better heroes than I have, simply because of my player level. But essentially, player level only says something about time spent on the game, and not so much about the luck, or money involved.

I reach top100 in cups regularly as a ftp.
Have defeated guys from Departed, TK, Gipsy Danger and Avengers.
They have tough teams, and I have to go mono against them, most times yellow: 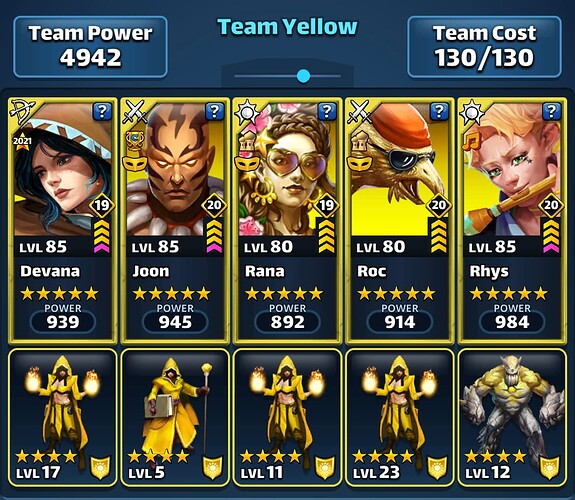 In war with 6 flags that is not sustainable.

In war I can not compete with the top tier alliances, but in the lower top100-120 area I am doing ok.

Its possible to be moderately competitive as a f2p, but you need some luck and lots of dedication.
Happy gaming