Better way to increase special skill of maxed out hero

I did not realize there was a request area, so I already put this in general discussion.

There needs to be a more reliable way to increase the special skill of that pesky 3* hero that, due to horrible luck, ended up with a special of 4 or 5 when totally maxed out. Just throwing heroes at them when already leveled seems like a really bad return on investment. The best way, in my opinion, would be allowing us to repay the last ascension items to increase the skill. This would only work on a maxed hero.

Other alternatives would be an increased probability on maxed heroes, or basically anything that would make us feel like there was a reasonable chance we are not just throwing away hard earned resources, which is how it now stands.

This thread seemed to get a lot of attention a little while ago, but had been abandoned:

I’m having trouble maxing out Brienne 's special skill. Ever since she hit max level it seems impossible to level up her skill. I’ve tried 25%, 50% and even 75% chance and no luck. Brienne is currently stuck on 5/8 no matter my chance percentage. Ive been trying for over two weeks please Help! Thank You 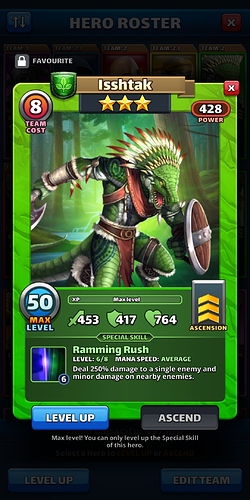 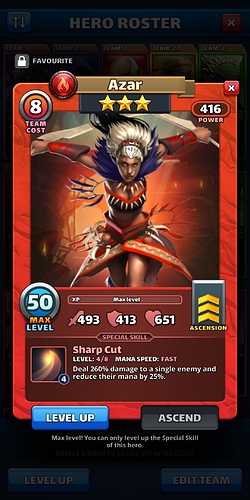 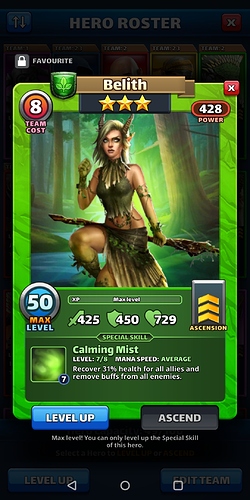 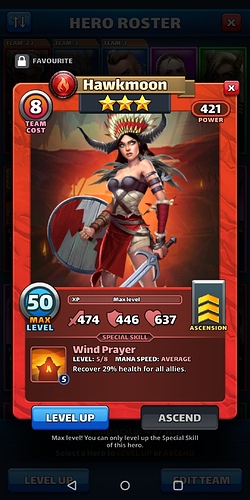 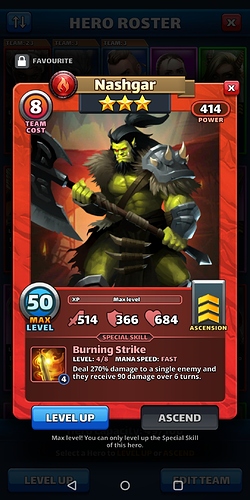 Unfortunately this is what I’m dealing with

It does suck though…

Banutu - Yikes! That’s awful. I managed to max the skill for all of my 3* so far except Brienne and Gan Ju, both of whom look like they will be at 4 or 5.

Sleeper - thanks for the realistic info on this. I haven’t been running my TC13 lately because I’ve been trying like mad to level up a bunch of 3*s. I’ve been using all 3 camps for common and uncommons. Perhaps I will try that strategy, but I can’t imagine how long it will take to get 3 specific copies of Brienne. Gan Ju can suck it.

I don’t mind all the time and resources to generally level up heroes because I am at least getting something in return. Throwing things at an already maxed hero, however, is awful because I will likely get NOTHING most of the time.

Wish I could get my Belith that high lol

I’m going to merge the replies from your other post @Redeye. :)

I have spent the past couple of weeks leveling up a 3* team with backups for the next monthly event. To my great disappointment, it looks like I might get Brienne totally leveled up, but her special is going to be 5 or maybe 6 due to crap luck. With her especially, full power on that skill is pretty important. So now I don’t know if I should feed her 1* heroes when she’s maxed in hopes of fixing that, or if I should try to score another and start over.

Here’s my suggestion for the developers - let us repay the last ascension fee (on a maxed hero only) in order to increase the special skill level. I would be happy to do this for a guaranteed boost as opposed to pissing away heroes in hope of an increase. This only really happens with 3* heroes, so no rare item shortage would be a problem.

In the past i suggest as well to change something in 3* hero special skill due to this problem that occure only on this kind of heroes, even if you feed them in the most accurate way.

Actually i have 2 to 3 of each color, and sadly only 3 or 4 have their skill maxed (some of them have only lv4 or lv5) . No need to say that is just absurd and force people to wasting many heroes hoping to max them somehow.

Someone came up with the idea (maybe @Rook ?) to increase exponentially the chance after they are maxed, to reduce the amount of heroes to use.

I really liked that idea, but sadly nothing as changed since then.

Even just adding an additional multiplier to the special increase probability after full ascension would be welcome.

If you train them with 4 heroes of the same type (at once) you’ll have a guaranteed increase in skill level. Easy peasy.

I’m assuming Kahree is being sarcastic. If not, you have way more resources than I do.

Ok that’s possible. If so then I apologize.

Ravindau - no apology necessary. I agree with you completely. Getting just one cost me a bit of cash.

It is costly, but it is also a guaranteed method to increase the skill level without wasting many heroes.

What if there was a specific item or recipe or enchant that could be found in general or craft at Forge that would help to level 3* s specials? I think that would be a very nice idea, since we use now 3* s, but in lots of cases we don’t have their specials maxed and to spare bunch of duplicates isn’t beneficial at all.
So let’s say it’s an item that can be crafted and costs x hams, y iron and/or some 3* items like battle manual, chainmail shirt, scabbard, tall boots. This way no one could say we don’t have to invest, still it would be a rational way to help ourselves a bit at events or AW now.
Cheers!