I normally have no problem, probably a gremlin at my end.

Hey @BarryWuzHere , I just realized I’m a little confused by your spreadsheet. Why is the data between the “Atlantis Rises” tab and the “All levels” tab inconsistent?

Why is the data between the “Atlantis Rises” tab and the “All levels” tab inconsistent?

All Level means at normal days, not in Atlantis Rises.

FYI 2:22-6 is listed way later on Barry’s list of levels for the Underwater quest bc of the WE to complete, but I would rank it way higher for recruit-hunters, esp during Atlantis Rises when it’s not even that much energy- it’s just so much better compared to the others for recruits.

That’s why I provide the info about both WE to complete and recruits. So you can pick which matters more to you.

Since the list is for the missions, the primary search is WE cost.

There is an XP table with reduced Atlantis. I heard that 9.10 Season 2 better for XP. Where can I view?

Thanks as ever to @BarryWuzHere for all his hard work!
I wanted to simplify my farming strategy - basically so I don’t have to think at all!
Caveat - I have done all the avatar missions.
I have got it down to basically this - seems to work for me. Hope it helps. 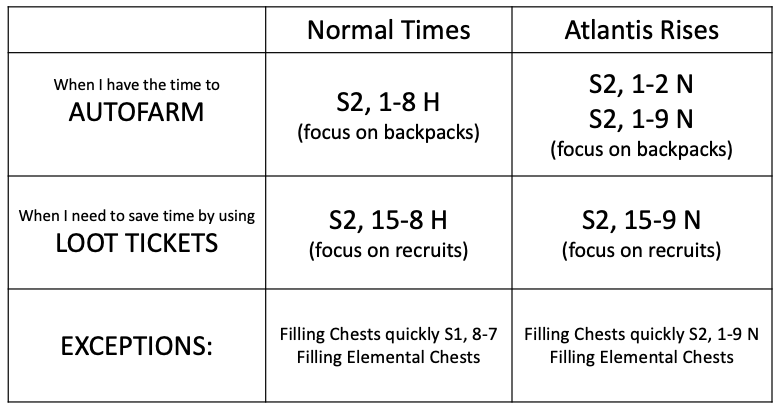 Thanks for summing it up this way.

FWIW, I don’t know if I could consistently auto farm S2:1-8H with my roster, but at 10WE a pop, I can play through my spare WE pretty quickly.

Thanks @Benn. Regarding autoplaying S2:1-8H you could at least probably autoplay through the mob levels, and then just take over manual control for the boss level?

I do pretty similar with two exceptions because I have a pretty high WE max at my level and I now have a stupidly large recruit surplus.

Thanks @BarryWuzHere. So where do you use your loot tickets?

Do you just use them to speed up stages that you could easily autofarm anyway?

I was thinking it was best to keep them for more challenging stages where autofarming was not viable or reliable. But maybe that isn’t the right approach?

where do you use your loot tickets?

My strategy on loot tickets has been based on farming for backpacks, and I’ve been buying deals with loot tickets and flasks and saving for AR to farm packs in S2:1-3N or S2:1-9N, often buying a few more refills for gems as well.

Since I am truly running out of 4* and 3* heroes I have any reason to level up and don’t have many new 5* heroes (or the mats to finish them), I may be adjusting my strategy on farming downward a bit.

Thats really interesting @BarryWuzHere.
Presumably you could easily autofarm those levels if you had the time/patience - so you just use loot tickets to speed things up. I might try that.

I too am running out of heroes that I care to level.
I am now trying to get a TC2 that I can have permanently running (not collecting) so will also need to focus on backpack production. The thinking is that if/when I do get a decent 5* I should be able to level it very quickly.
Thanks for your insights

Yup. And doing all your flask farming and buying extra WE for even more during AR makes for a crazy amount of auto farming unless you hoard loot tickets and burn them all then too.

With all the new things requiring WE (costume quests, trials, longer events), it is getting harder to farm enough packs and recruits to keep one TC2 going constantly without buying extra. (I have bought enough extra to have two or three running some months!)

Outside AR I fill monster chests in S1:5-6 … top backpacks (tied across province 5), best monster count in the province, and I don’t care about fewer recruits.

Always use them for leveling trick.

You have the annual 2nd Builder & your base is maxed...what next?

Need crafting mats to keep up with titan hits and challenge events. Small mana pots are my current bottleneck, but I can see a day in the not too distant future where axes will be a bottleneck too. And if I ever decide to compete in the Epic or Legendary event tiers, then there’ll be several more such battle item bottlenecks.

I’ve even heard some people using the (gasp!) Alchemy Lab to help with these battle item shortfalls Pray for me that I never reach such a low point!

During AR I farm S2 1-10, and outside of that it was always S1 8-7 for recruits since I have so many heroes to level, but now I’m running low on battle items and such as @gregschen said never thought I’d see that day! AR keeps me going just short of a month out, I may have to forfeit recruit farming to get ahead on crafting materials.

Once you’ve got 2000 days worth of TC11 built up like I do, you’ll go to the stages with the LEAST recruits, just because you can! LOL