Azlar costumed special seems a bit odd. His costume (paladine) probably puts him in tank position where all enemies still have above 50% health at least for his first strike. 2nd hit for a slow hero seems allmost impossible. So the double dmg at his special is not being used at all.
Imho, should be changed to hit double when enemie have above 50% health than below 50% health. 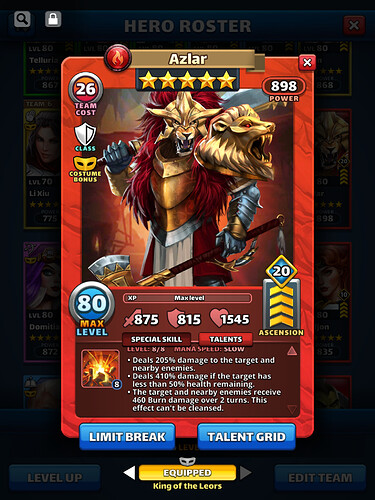 disagree
he is perfect as he is, because he is a great finisher hero. and can kill three heros if they have 49% health. Other hit three or hit all heros cant do that.

even if he does not apply his increased damage his total damage output is very decently in 800 dmg per hero (including DoT).

you need to go on attack route with him to maximize his DoT which goes up to 600-700 in two turns (including troop bonus).

I agree with @freetgy C Azlar is a true finisher…just like Fenrir. He’s not a good tank for the most part, still a wee bit fragile. He’s fun to use though for sure!

I’d say his Paladin class just means he has a bit more survivability which is his weak point so is actually well thought out. He’s not a tank

His costume (paladine) probably puts him in tank position where all enemies still have above 50% health at least for his first strike. 2nd hit for a slow hero seems allmost impossible. So the double dmg at his special is not being used at all.

Maybe, just maybe don’t judge every hero after his defense performance. Azlar c is a great hero for offense, and there his special truly shines.

Or if you have to put him on defense no matter what, try him as right wing during rush. Works magic there.

Not all heroes have the perfect class for their special. Not at heroes are made for defense.

What about just a new hero with the special skill you suggest?

410% damage to 3 from the start + 460 uncleansable DoT sounds cool but he would be completely broken in my opinion. there’s no coming back from that, but you don’t notice because you don’t need the DoT anymore when he does that. Half his attack + the DoT is very substantial already. They could have just given him that and the effect would be the same, but that looks so boring on the card

If he is to be used with costume for attack, as it seems more right wi5h the double damage finisher, then should the class at costume be changed from paladine (defense class at center) to barbarian (attack class at the side) as well?! This was my goal at this discussion from the start.

A finisher is a barbarian or someone with survivability like a fighter class (revive, shoot again!)

He’s a finisher…which pairs nicely with his slow mana speed. Soften the enemy up with faster specials. When the lion is ready to roar he’ll be finishing off the scraps.