In preparation for Atlantis Rises returning I searched for a list of optimal AR levels, but couldn’t find them. So I have been doing some analysis of Barry’s Data myself, and came up with this. Hopefully others will find it useful too.

EDIT (SEPT 2019): When I first started out with this I did some decent analysis of Barry’s Data, to try to come up with my own reasoning and opinions, but he’s since updated it a few times and it has knocked my initial analysis out quite a bit and I’ve found I’m now basically just copying @BarryWuzHere’s conclusions. As a result, you are probably better off checking out his spreadsheet yourself (tho I’ve updated it, and intend to continue to do so - at least in the TL/DR section).

I intend to do the following:

If you wish to use loot tickets, but have a limited supply:

I looked up the materials I was lowest on and assumed others would be similar:

Additionally, worth noting that:

Please check out my other forum post for info on completing Atlantis missions.

As you can probably tell, I’m taking it a bit more easy on the forum - sorry for not replying. I am still playing the game in my alliance, Eldunarya. We would love to have you and we have spaces. We are an experienced, friendly bunch that take it easy (only war hits are mandatory). Look us up.

@BarryWuzHere’s Spreadsheet has since been updated, but left this mostly to compare rough numbers vs the “previous best” without AR. 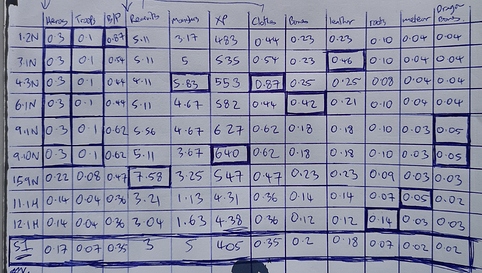 Barry actually has an AR tab in his spreadsheet, around the middle of it, that you might want to check out.

Thanks @Garanwyn - that’s where I got my data from - I just wanted to be able to compare the rest of the data from the levels rather than just do 15.9 for the recruits over and over again.

Hoping folks agree that the analysis, whilst not flawless, provides value (and wasn’t 2 hours wasted).

I also hope that if I was mistaken, or if there were other nuances that I didn’t notice that they would/could be discussed here.

Awesome! I’ll sharpen my pencil and take a look. More analysis is good analysis, so if you’re extending what’s there, that’s great!

Would love any feedback or pointers to better levels!

Wil do! As a general comment, we just completed a massive analysis on the distribution of loot. It looks very clear that most stages within a province have the same drop rates for items.

So, for example, any stage in 2:1 normal will have the same backpack drop rate. The governing choice on where to fight is probably autofarmability or which stage helps complete avatar missions.

Does this include number of enemies? All else equal, that seems to be the most important factor, then, to maximizing one’s loot.

No, just drops. But the enemies don’t correlate with the number of loot drops. So unless you’re filling a chest, it should be a non-issue.

The number shown in the upper lefthand corner goes up with each new kill… but you’re saying that that’s a constant number in the end, which is province dependent, not stage/enemy dependent?

Not with each new kill, but rather with each kill that drops a little chest. And there’s good evidence that they just pre-generate the number of chests that will drop and distribute them among the monsters.

I ran 26/8 normal almost exclusively last time. Mainly to get the Gadierus avatar but did fantastic on swords backpacks and recruits. Xp was also very good. I will be watching this to see what levels I can use this round to mix things up.

It’s worth noting that 6-9 yields the same # of recruits (per WE) as 15-9. So if you’re in more need of Large Bones and String than Firestones and Potent Leaves (which will be a thing with Harpoons requiring Large Bones), then it’s worth considering recruit farming there.

Thanks everyone. My brain is fried at the moment so will try to look at this tomorrow. Is there a link to evidence or anything for this or did I just miss it in @BarryWuzHere s SS?

Thanks again everyone, very helpful!

Is there a link to evidence or anything for this or did I just miss it in @BarryWuzHere s SS?

In the INFO tab of Barry’s public sheet, there’s a link to the data source sheet (view only mode, of course). Is that what you’re after?

Has anyone confirmed this for coins?

See @zephyr1 discussion with Devs in the notes below.

I’ve done a bit of work on my spreadsheet for Atlantis Rises, and some things might be a bit different than what you looked at to draw your conclusions initially, @FrostbiteXIII

First off, the current Atlantis Rises tab pulls data from synthetic farming rates which are far more accurate than averages of collected runs are, especially with so many stages having low numbers of runs. One consequence of this is that things like backpacks, large bones, heroes, troops, food, iron, etc. are all constant across entire provinces; the ONLY things that will vary by stage within a province are monster counts and recruits, and player XP.

I recently made sure that the level listed is one that has best recruits in the province; it previously just picked the first level in the province when everything else was the same. Based on that I’d change a few of the ones you picked. (And my spreadsheet now does it)

So I prefer 2.9-4N during Atlantis Rising.

This is really helpful, thanks @BarryWuzHere and @Gryphonknight! Lot of info tho, so please bear with me.

Unless your spreadsheet has now been updated I assume I don’t have access to the full data, so can I check we all agree on:

Here are my synthetic numbers in S2, province 9 normal. (All the other numbers are the same; I’m not showing them)

“Best” depends on how what order you personally rank recruits, monsters, and XP, and which level has monsters you would rather farm / are sick of looking at.

As for provinces … there are moderate differences between provinces in the total number of ascension mats and crafting mats per WE. During AR, some of those provinces win: