There are two ned 5 star heroes in the Atlantis summon. But are they worth spending gems on?

Whats your opinion on the new 5 star heroes compared to the regular/hotm heroes in the same color?

This is my opnion:

TARLAK
Reminds me of Wu-kong, only better. Good only against titans. Wont cry if I dont get him.

Misandra
Fast 5’* hero is good. OK damage and possibility for additional hits. Mana generation as well. I like her. 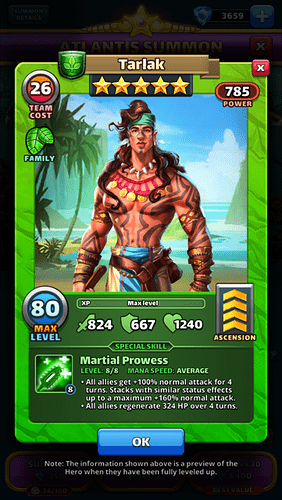 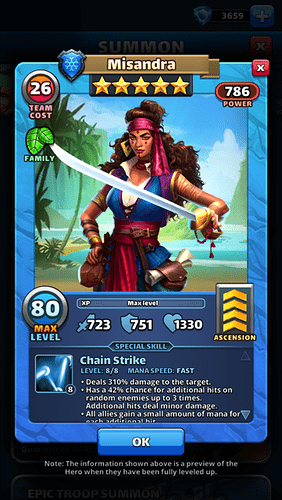 A 5* Wu replacement and people are not excited about him??? Tarlak will be incredible.

Wu is +185% -32% accuracy for 5 turns or effectively +115%. He has the potential for much greater variance in his out put, while Tarlak will give you nearly the same effective buff for 4 turns + a minor heal over time without the bad streaks (or the good ones).

Tarlak being 5* comes with all the stat increases of such, making him perhaps the long term replacement to Wu. Tarlak will also be much more viable on defense boosting the team and healing them all.

A 5* Wu replacement and people are not excited about him??? Tarlak will be incredible.

I think that everyone want him right now, who would not be excited by drawing him?

Tarlak being 5* comes with all the stat increases of such, making him perhaps the long term replacement to Wu. Tarlak will also be much more viable on defense boosting the team and healing them all.

He’ll surely replace Wu Kong on higher star titans but the monkey will still be the best when heroes will not die so often (185% + 48% and some miss is near to 160% without miss) with the exception of Rooster Dragon. Having him could do a lot of good hits but the damage will be moderate.

It is worth mention that without Wu Kong’s miss chance Gregorion’s crit chance will be more valuable: the buff only last 3 rounds and seeing your crit-empowered tiles miss is a pain

Not so sure for defense: it seems pretty weak on durability and attackers can bring dispellers to make him useless. Remember that the best attack empowerer are the ones who can also tank 'cause this way they could likely empower all the team (while preventing their death).

Putting Tarlak as a tank could not be the best choice. It could maybe be a okish flank but he could encounter the mighty snipers damage before firing his special

Wont cry if I dont get him.

The OP is not excited about him

it will not replace Wu Kong on low titans

There are advantages of Tarlak over Wu here too. And that is with consistency and higher attack stat than Wu. He will be an equal option if not a better one. But then most with him developed won’t be on low Titans anyway.

But then most with him developed won’t be on low Titans anyway.

Exactly for this reason

Not so sure for defense

You think he is not better than Wu on defense? I was only comparing to Wu, not saying that he will be top choice for defenders.

I’ve been lucky to get Talrak, Fong, new yellow 4* and new red 4* buffer from a single x10 summon. To be honest I wanted only 4* buffer and Talrak. So, Talrak’s 100% doesn’t work for any special as Wu if I’m right. He is great, but Wu I think can buff stronger on titans

You think he is not better than Wu on defense? I was only comparing to Wu, not saying that he will be top choice for defenders.

Well, if you were only comparing him with Wu Kong then I can agree (He have stats advantages) with that but I dont think we’ll see planty of Tarzans on defense.

Talrak’s 100% doesn’t work for any special

I was unsure of the language used in the description. If it does not translate to a boosted special then that does give Wu an advantage. But then there are many that will hold specials to use when Wu buff is off so as not to miss with them. I still think Tarlak is more desirable than the OP might feel.

Super excited that I just pulled Misandra! I’m thinking she’s a better ascention candidate than Magni given that I have Alasie and King Arthur already maxed for blue.

Do you think she’ll be a viable tank? What with the mana gain, the potential extra damage, and the high defense, It seems like she’d be pretty good. Couple that with the lack of high powered green strikers…

To me she could be a very good tank by being alble to help filling a bit of mana to the entire team!
751 DEF and 1330 HP is pretty good

If you also have Gravemaker there will be hard times for green attackers!

Misandra was really exciting on initial release in beta, but her damage was (greatly) reduced. If you do the math, you’ll see that her expected damage is well below that of the Arthur/Alasie/Magni club. The mana kicker is really nice, though. If you already have Alasie or Magni, Misandra adds some diversity. But I’d be more excited to chase her if her damage stat was a little higher.

While his buff isn’t as strong as Wu’s I would use Tarlak any day, all day against titans because of the perfect reliability. When I drop a match-3 on the titan’s weak spot, I want that titan stunned. With Wu, I can get a whole cascade and still not stun the titan. Tarlak has a critical weakness: his low tankiness. He’s really fragile and is one-shot killed by most 12* titans unless the titan gets an attack debuff (like axes) or Tarlak gets a defense buff (like turtle banner).

Edited:
Only advantage of Wu that he buff all attacks, not just normal attacks.

Omg, not exited with Tarlak??? What’s wrong with you people??? 824 attack - only that is enough… Btw Wu have another damage buff than Tarlak, SO THEY STACK!!! Let’s imagine situation - Isarnia Arthur Kiril Tarlak Wu agaist red titan (took blue heroes cause of high attack). Wu buff 185, Tarlak buff 100, Kiril buf 30 (AND ALL THAT STACK), then Isarnia debuff 44 defence Arthur debuff -54 against ice… So… how much will hit one stone? I think more than ~8k. ONE STONE CARL. Btw you can replace Kiril with second Isarnia cause of high attack and use dragon banner, then will be even more damage… Not exited with Tarlak… omg.

But, Tarlak buff not to exceed 160% of normal attack, therefore capping it there, while technically stacking with WU specials damage increase and minus hit chance. The Normal damage stacks to a max then of 160%. Perhaps if Tarlak fires first then WU but…This is how I interpret it.

Well it’s said that affects with similar buff, as I think it’s Tusk Kiril Lancelot attack buffs. They don’t stack, but with Wu they stack cause Wu it’s different effect. So I don’t see the reason why Tarlak attack buff can’t be stacked with Wu. Who have Tarlak (who is the lucky b***h

@MikhailUlt I were talking about ATK caps.
Not so hard to read

I did not maybe explain well, read his first ability again. It does sat it stacks, it boosts 100% of normal attacks up to a maximum of 160%. I still think he’s great, anyone else have an opinion or perhaps some playing time with him. WU +185% then his ability fires add 100%…oh it’s already up over 160%…=+0%. Idk the wording always catchy lol.