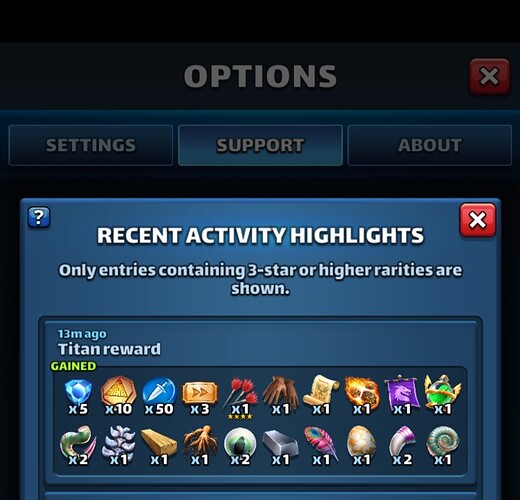 Should I use Alchemy Lab 20 and cash in one of my Damascus Blades? I got 8.

Unfortunately that wont necessarily get you the tome it will generate a random 4* mat other than what you transmute.

I feel like this waiting period doesn’t align with the word “fun”.

Plus it costs gems, better to wait for farholme pass and mat drops

I feel like this waiting period doesn’t align with the word “fun”.

This whole game is becoming not fun, broken heros not getting nerfed, weak ones not getting true buffs amd just continued saturation of heros, i havent (other then miki from ha10 and alfrike from SE) gotten a 5* pull now for months its ridiculous actually, it took almost 6 years for any kind of mercy system which isnt even a trie mercy system. Feels like take 2 is running the game till the wheels fall off and QoL is last priority 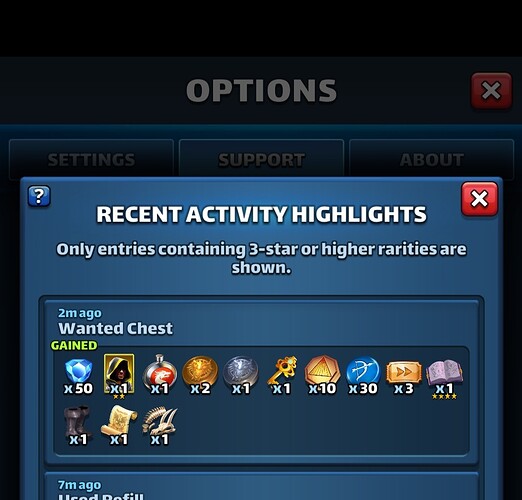 @Bizack id trade you the tome if i could

I’ve opened so many chests (including an ice chest), I did mystics visions nonstop and even killed a special Titan and I still don’t have one. I just downloaded another popular game we’ve all seen advertised on YouTube just to see if they’ve got a pity counter and it’s so much more generous. Imagine logging in every day and if you’re loyal enough you get a legendary. People aren’t joking when they say this game is focused on greed.

If youre talking about something that rhymes with flint stones lessends then i know ive been playing over a year now and i have a roster that looks like a p2w and havent payed a cent am in a top 10 guild and am always in top 400 globally, i have meta heros. In this game i payed for the first 2 years an went f2p now for about a year and 4 months and i have a f2p roster. E&P is a sinking ship, they’ve taken way way to long to listen to anything from the community, a mercy system shoulda been in from the start plus daily log in rewards, free legendary for playing over x amount of time and the ability to fuse heros. But they got greedy lost all trust since the telly vela nerfs then krampus costume etc etc, take 2 apparently is loosing $ now on E&P and top players from this game are going elsewhere cuz of all this and they only have themselves to blame, greed got the better of them now theyre loosing money it’s why we’re seeing a flood of new OP herps like M&M or anne etc 2nd costumes for s1 instead of actual buffs , its sell sell sell before shop gets closed up, we just had a loyal alliance member leave cuz he realized over Thanksgiving that family was more important then spending and grinding on rented pixles cuz we cant even sell our hard worked accounts in E&P so those hundreds if not thousands spent is all rent money we keep nothing once we leave or if the game goes down the tubes which it will and is. Ive had plenty of thoughts about leaving for all these reasons. The community and my alliance mates keep me here, but eventually that still wont be enough to counter the dissatisfaction that is empires and puzzles

Do you have a line ID or discord? If its the game im thinking of i can get you into a good group in discord or if prefer line at least can give tips, the guild im part of is like 7DD in E&P kinda, we all help one another and ppl like mr spock are in one of the discord severs im in thats not for our guild alone, alot of content creators willing to help and definitely alot of top players like a few from my guild that are usually in top 20 globally etc. Alot of talent and im no slouch myself, id post screenshots here but i cant without it getting flagged and delted cuz god forbid anyone is blasphemous about SG