Any one ever thought that the higher the raid arena level, the better the loot? Well I did. I guess I was naive in thinking ascension mats would be better the higher the arena. Maybe for some they have, others?? Myself starting on bronze way back I thought, I have to grind n level up. Get better loot. Then level up some more to get better ascension mats. As time went by I realized it doesnt matter the arena any more. I am now in platinum close to diamond and my loot has been the same for 11 months. Ham, iron, 2 gems n maybe a trainer hero and some roots or potions. Very disappointed in this game. The only reason I still play is because I have invested some money n sont want to lose what I’ve already built up and leveled up! But honestly if I find another game I like I will most probably drop this game. It is getting way too ridiculous after 11 months and seeing balls all in summons, ascen mats and low percentage of everything! The devs game approach to this game is killing it! I’ve the smile I had for this game a while ago.

I meant to say the devs gambling approach to this game of gotcha! 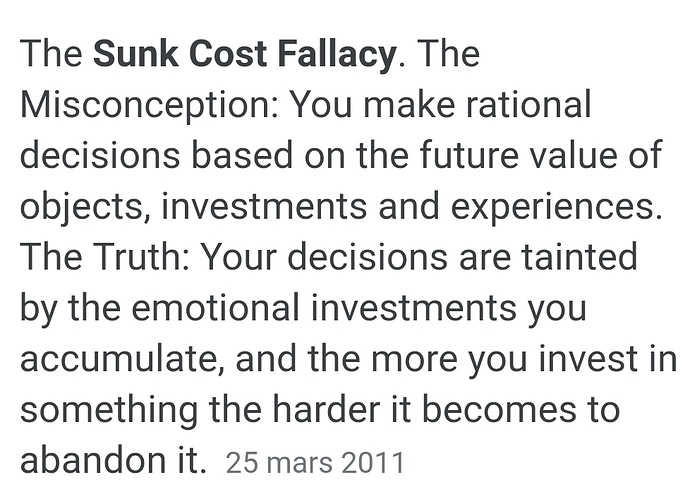 When dealing with very small odds for success, the expected normal outcome is failure.

Ain’t that the truth! Lesson learned.

But every now and then you will find a gold nugget.

Yesterday after a bad raiiding streak I had to open a gold league chest ( instead of platinium ) and I found a mysterious tonic. I was very suprised but it’s not the first time something good fell out of a raid chest.
One tends to forget the nuggets after several weeks of bad loot drops.

Good luck for you to.

That sounds like the ripples of the gotcha effect. Every now n then a nugget drops, just enough to keep you dangling for another few months or so. A couple of weeks??? I’d say a small % of the community are lucky with a nugget every few weeks! I haven’t had gloves or compass which is is 3* ascen item in months let alone a tonic!. Most of heros are stuck at 3/60 or 3/70 because of this. 11 months now of this. Does SG think that I will drop a wad of cash to get ascen items?? I can buy a playstation or xbox game for only 80$ n ascend my characters without spending another dime in matters of weeks or less! What is SG thinking or expecting?

Worth it for the chance and the more raid chests you fill the quicker the next elemental chest would appear. Normal 100 and raid chests have been great throughout our alliance the past month.

Just a few posts above I wrote:

When dealing with very small odds for success, the expected normal outcome is failure.

Of course there’s a catch. Failure is indeed the expected normal outcome, but only for a single grab.

The more grabs you make, the better your odds at that nugget become. For a F2P that means filling chests and spending gems not on summons but on speeding up chests (unless you lack heroes to ascend and even then I wonder about them summons being worth spending gems). Also not missing mythic visions, hitting hard against the titan, doing the rare quests and completing the events at the hardest lvl (you’ll need 3.400 strength team + save up on consumables).

Over time, very slowly, you -will- gather unfarmable ascension mats. Your overall experience from opening chests and looting titans will still be “again no mats”, but they’ll trickle in regardless.

Depending on how hard you play and for how long you’ve played, you’ll find this game has different rate limiting steps. No 4/5 stars, too few ascension mats, those may be just phases. You may haven’t been pushing it hard enough for enough time… 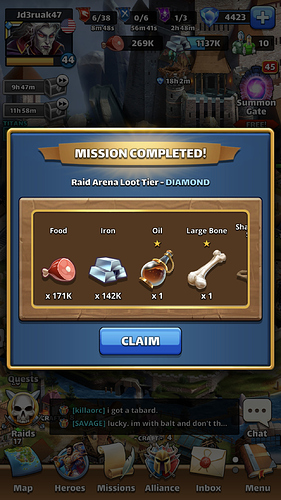 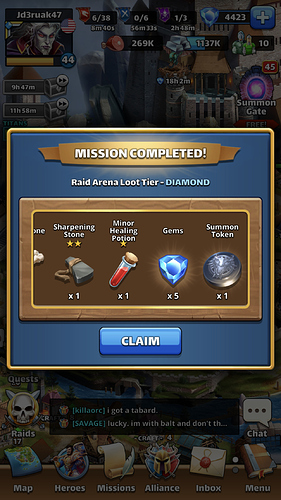 This is my typical Diamond Arena loot. To be honest Titan is not any better . I am constantly A or A+ damage dealer on titans over 300k most of the time.

On what titans? If you constantly hit 300k+ the titans you face might just be too tiny. Move up and you get better rewards

Titans we currently hit are 9* and some 10* titans at times. I heard a lot of talk about 8* titans and up giving better loot but I’m not seeing it so far. Loathe game and we try to clime the ladder to higher titans. Thanks