Are season 1 heroes under-powered? No longer relevant? Can they compete in global top 20?

What they’re working on is S1 costumes part deux! Not quite the same. More like a distant cousin.

Uhm, did you read my comment? I said "SG is working on an S1 family bonus. I made no mention of the 2nd costume.

They specifically said they are working on Season 1 Family bonus. Facts matter.

I did . They’re working on both but the new costumes are worth mentioning as the family bonus will probably not add much. Don’t have an issue with the video but I think that S1 classic heroes are not really relevant almost anywhere anymore. Enjoy your videos btw.

As of now, My understanding is, the new = 2nd costume will be an add-on to the existing = Base hero & 1st costume.

& since this is beta, all of it is subject to change before final version / decision gets introduced into he game.

I think I see, @dansing

If you have Regular Kadilen and never received her costume. If you get the new one you receive both.

If you do have C. Kadilen, in order to get the new costume, you just summon it again!

Wonder which will be next, S2 or Hotm?

over and over again.
For his so-called “buffs” 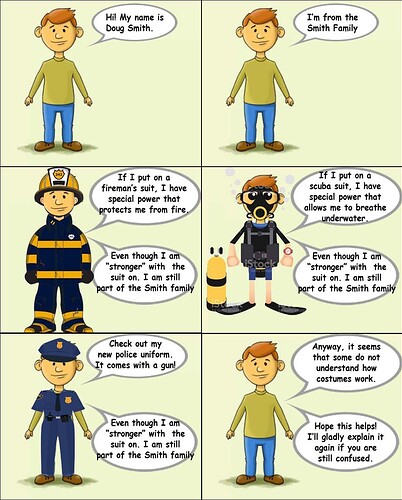 We gather here today to pass on our respects to the dearly departed Doug Smith. He learned too late that without his costume and gun, he wasn’t a relevant deterrent to fighting crime.

Very strange he was

Yes, they are underpowered.

Yes, they can be competitive given that you can sprinkle in some non-S1 heros with them in a mono, other otherwise complementary team.

It takes two things to be “global top 20 competitive”: 1) ability to gain cups on offense and 2) ability to field a sufficiently decent defense to be able to maintain those cups.

S1 hero’s are still decent at 1 above when brought in a high density charge/damage format. That typically means mono. But on defense, even a double color of S1’s will doom you to endless defeats.

So there it is, if you want to spend a ton of flasks to run up high in the points, is that competitive when the moment you log out, your team gets obliterated on defense? Sorry, I don’t think that’s competitive.

This opens up many things viz, heroes charging speed when combined with :

This opens up many things

My understanding of acquiring the 2 keys like I used, and then get RnG’d by both pulls.
Is that I may only get 1 key now. Forget the legendary, many 4* still elude me.

With new designs for whale pulls and leveling first, and then you can breeze through the last 5 level or so with your +5500 team.

Not to mention,
I wonder how many that previously chased the

Will do so again.

The new costumes are not off topic here,
Since the claim is that costumes are similar to materials that DO NOT come from portals.

But here is the brand new thread:

NOTE: Please do not, under any circumstances, share IMAGES OR VIDEOS from Beta in this or any public Forum thread. Violations can cause players to lose their Beta accounts, or threads to be closed down. This thread is to provide early insights and discussion on the updates to Costume event. Don’t get too attached Details from Beta, especially brand-new Beta content, don’t tend to be very reliable for actual release. It’s incredibly common that features are changed during Beta testing, or…

Well, I spend and still don’t have costume Leo while I know many Free & cheap to play that have him…
So
All that spender talk / angle is not entirely correct ….
Coz
RNG still rules.

Yes, spending very high till that specific hero pops out is fine, deserved…
coz
those fellows, mostly play with similar fellows….

The ones who mostly complain about “why so many heroes” are habitual or have too many heroes….
While
I personally am happy seeing variety of heroes that are in circulation across the player base.
&
Adds to the craziness, that this game is now.

Hilarious reading hero specials more frequently as I am. It making any effort to remember…

This is how costumes really work:

I can’t count how many requests I’ve seen from players begging for old heroes to be reworked and made more useful and powerful. Why aren’t more players happy with SG’s stellar job of doing just this for Panther?

Because they didn’t “rework” Panther to make her “more useful”. I have had Panther for almost 4 years, and she is still the same. In order to get the upgrade, I have to get extremely lucky or spend some serious cash. I’m not arguing for a nerf, but don’t sell this as a fix for an old hero.

It’s basically a new hero, as you have to pull it seperately.

SG did not do

just this for Panther

We gather here today to pass on our respects to the dearly departed Doug Smith. He learned too late that without his costume and gun, he wasn’t a relevant deterrent to fighting crime.

I got conflicting information. I heard he died because he went scuba diving without a suit, after he listened to somebody who told him that being part of the Smith family would make his lungs relevant underwater.

Yeah, it was a bit of a complicated picture. Still waiting for full details from our chief reporter.

Just now though it appears he was a marine cop so had both a police uniform and scuba suit, plus his top class speedboat maxed out that really boosted his speed.

Unfortunately when he spotted the smugglers it was just him in his dinghy, it didn’t go well for him…

The latests report says he did it because he heard of the infamous Youtube video “ARE SMITHS STILL RELEVANT?!! ATTACKING SMUGGLERS WHILE BEING A SMITH!!! WHO NEEDS GUNS, SUITS OR SPEEDBOATS, YOU’RE A SMITH!!!” but didn’t watch it.

Little did he know that it actually featured Smiths rocking machine guns, state of the art scuba diving suits and custom made speedboats.

Poor Doug. He was dumb but I liked him.

This was really funny. I nearly laughed out loud, and would have had a hard time explaining why to my boss…

In the end, Mama Smith was quoted as saying:

“I don’t understand why Doug did what he did. There was never any question that he was part of the family. But we kept telling him: don’t try to do what your stronger, more capable brother David does! You are your own person, you’re not a clone of David!”

Well, yesterday the new round of 2nd Costumes for S1 heroes was released… maybe they will no longer be irrelevant… or will they??

2nd Round of S1 heroes costumes