Just one of many facets.

My point was her heal was TINY compared to Arco’s. And not an overheal, so much more limited in utility. She is far more situational than Acro given her small regular heal and cleanse. The only thing that will generally always be useful is the mana gain.

Not a bad hero, but not in the same league as Arco.

Every hero is situational that is why having a deep roster is integral to competing in the top echelon. You know how many times I don’t use my Ariel during war because other healers work better than her based on the situation? Sometimes I think people take positions merely to be the contrarian and some people do this repeatedly deriding obviously powerful heroes due to a perspective most definitely not shared by the majority.

The un-dispellable 4 damage stone skin sponges up, and wastes, more opponent specials than I can count. It’s far more valuable that I would have guessed reading the card.

In conjunction with minion summoners or druids, even otherwise insignificant thorn minions add up.

At this point, I think this person is just digging in regardless of any counterpoints. It’s about winning an argument imho.

Support heroes are meant to give your attacking heroes a few more chances to cast. But shouldn’t be the strategy to help you win.

Arco is about 3/41 at the moment but even so he had a role to play. 4/5 against what I would consider a tough defense. 3 support heroes, one attack hero and one that can play both roles (Lord Loki).

He’s probably my single favorite hero at this point. He is just that good.

Just to clarify…it’s not 4 turns of stoneskin, but rather he takes 4 hits and reduces the damage to 1 for each. This could be active for ten turns or one turn. Still, VERY valuable.

@Noxyking you bring up some good points, I’m trying to finish him now

and will prioritize for any defense with fiends but like others have said, he’s probably the best from the family.

A couple of comparisons from my experience to show his expected value.

Look at cAriel overheal vs the straight up heal, her costume is amazing (sure the 4% mana node adds to it too.)

Just recently got c2viv and her overheal is gravy.
Garnet and Rhys faster, smaller overheal; both very good heroes but maybe less shiny if it was just a regular heal.

Even prof is nice but slow.

Different type of hero but I left sekhmet at 11 because the heal is nice but if she had fast overheal, she’d be worth rings.

Arco has been my tank for months now for war and regular defense. I have a decent roster of about 65 maxed legendary heroes. He holds me at around 2800 cups and my war win rate is around 90%. He’s not being replaced anytime soon. No regrets using mats or limit breaking. 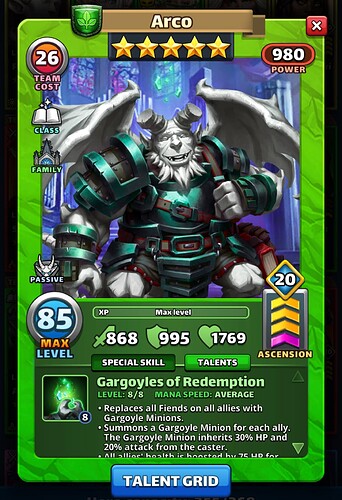 If you’re playing with rainbow or a team that doesn’t cast at the same time, then yes, Arco will seem decent. The team is already difficult to use due to the # of tiles needed to win the match.

Your video also made me realize not everyone have lvl 29 troops or ensuring attacking heroes all cast together. Therefore, they don’t see the full benefits of a healer such as Ariel, Toxicandra, etc. You might wanna search for videos highlighting healers that cleanse and/or add mana and see how they can turn the match around in tricky situations. Or watch some top guild war matches.

At this rate it’s pointless for me to comment any further. Hopefully, one day you’ll get that I am trying to help.

If this game is not obsessed with mana and speed, maybe you’ll appreciate how unique Arco is. But this is how the game is designed, to always emphasize on speed and mana.

I know right, it’s sad that so many fun and unique heroes don’t pair/work well in raid/wars. Resources also being so rare.

During a raid (and more emphasized in wars), the attacker is almost always at a disadvantage. Why? The opponent team will hit you harder, have higher defense, gains mana each turn, and gains more mana each time you move a tile (even more mana if random combos hit them).

Hence why speed and mana are the TOP priorities. The only time the attacking team gains the advantage is when your mana is full or when at least 1 opponent dies. Your odds of winning will skyrocket because you get to cast together and kill 1-3 opponent heroes to create more gaps. Once you have a gap, you won’t increase the mana of the opponent when you move tiles. Your mana also doubles when you throw empty tiles.

No team is 100% winning chance, because you might not get the 6 or 7 or 8 tiles required to win. But you can very well control the tile movement, cast timing, mana troop and who to kill. When your team requires too much tiles to win, that means you’re letting the opponent hit you multiple times. Hence positioning yourself more often at a disadvantage.

Once you understand the above, you’ll realize why faster cleansing/mana-gain support healers are so critical.

There arent currently any healers yet to this date, who cleanse and mana speed at very fast. Normal and fast are technically same on attack

While i do agree 100% on your point about long term value honestly i think currently cleanse is less required then it was over past 2 years.

We face hitters that deal between 4 and 5k Damage even without any defdown so things like Minions, Overheal, attack down and def up at fast and medium speed are alot more valuable now compared to cleanse and even dispel.

Today’s meta, if three opponent hitters fire, you are wiped out. Your team should be able to survive two hits. The good news is that they are mostly avg speed or slow. Hence, why the attacking team needs to be faster and faster. More emphasis on mana troops.

Healing may help you survive another hit but you’ll find yourself often stuck in a loop of the opponent ready to fire again. The damage you receive will likely be more than you heal, especially with Arco’s turn-based heal vs 1 time. (Which is better).

The best approach is to dodge the attack or taunt or reflect the attacks. Or better yet, to my original point, find ways to cast first and just kill the main threats. Then u pretty much win.

While indeed that is a valid strategy and avoiding damage is always better then healing damage in general, Healing helps on making any strategy more resilient to below average boards. Arco is a Safety net and his job is not to win you games but to help you survive if things go wrong and give you a chance to turn the tide.