The developers are continuing to work to refine and improve how matchmaking works, so we don’t know exactly what to expect yet.

As of the Third Raid Tournament, initial matchmaking was based on your Top 5 strongest heroes that qualified for the Tournament’s rarity and elemental restrictions:

Morning all, I double checked this from our developers and seems like there was incorrect information in the change log, it has been now corrected. Since previous Raid Tournament, this is valid:
“The difficulty of enemies that the players face at the beginning of the Tournament is now determined by the 5 best heroes in their roster.”

To clarify, the best 5 heroes within the rarity and element limits of the current tournament.

The special skills of the heroes are not taking into account, so for example in this tournament healers are indeed included for the matchmaking.

This is regarding your Raid Tournament defense team, not when you are attacking. When you attack, the opponents are based on the 5 best heroes in their roster (within the rarity and element limits of the current tournament) as previous two Tournaments. I hope this helps!

As of the Second Raid Tournament, loot was temporarily reduced:

Loot will presumably remain reduced for the third Raid Tournament, but we’ll see when Registration opens if that’s still the case.

Isn’t it a day too early?

Interesting, those show up properly for me, I’ll troubleshoot why you see them differently.

EDIT: Ok, it was a time zone issue. @yelnats_24 does that look right now?

Excellent, thanks for catching that so quickly!

Isn’t it a little early to discuss since no rules are out yet for the tournament?

Yep, but for my time zone it starts in the middle of the night. I’ve happened to be awake the last 3 of them…hoping not to be this time, so I put the thread up a little earlier.

We can at least speculate a bite for now.
My bet would be an attack buff, 4 Star heroes without either light or dark heroes.
Or a crazy 2 star heroes tournament.

I think we will see many unlevelled teams then.
For me that would mean I would need to use TC to gather a team before entry closes.
And I guess I will not be the only one.

Who do you think will be better as a tank between Chochin & Gill-Ra?

for such awards there is no desire to fight

I just put one 1* hero on defense, just to show my feeling about this tournament of boredom. Hope they remove this stupid feature.

I’m colour stacking yellow. Seriously, I have Bane and two 3 star trainers plus Valen and an unleveled Hawkmoon, for 1808 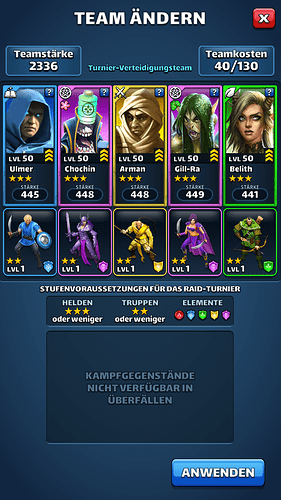 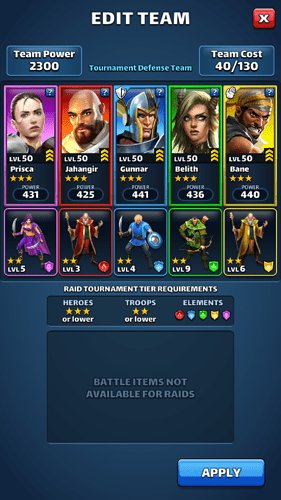 My TC19 burns to power level some of those slow rares. AoE, heal, cleanse, shared dmg and aliments will be the might imo.

Yay for Eat-Your-2-Stars-Day! I was really wondering if the cycle would loop around to 3-star tournaments or start all the way down at 1-stars. Now I feel it’s safe to eat all of those maxed 2-stars in my alt account.

Anyway there’s nothing materially different happening from the last time the 3-star rush attack came around. I have one or two heroes I kept off of the leveling buffet just for this tournament. Hopefully people would have noticed which teams were harder to beat than others under the Rush attack rules.