THE TOURNAMENT IS UNDERWAY!

This thread is for information and discussion on team planning, strategy, and FAQs.

For other threads in the Third Raid Tournament series, please see:

Special Rule: Bloody Battle – Healing or resurrection have no effect!

As this hasn’t worked as intended yet, we don’t know exactly what to expect with the new updates.

After the first Raid Tournament, there were updated release notes indicating some changes:

Once matchmaking is working correctly, Raid Tournaments should offer some interesting shifts vs. normal Raids, because everyone is playing under the same restrictions — if the week’s Tournament only allows 3* heroes, it’s not like you’re taking your 3* team up against someone’s 4* team.

Players with deeper benches meeting the requirements will obviously benefit, but just having a pile of maxed 5* or the best HOTM won’t do anything for you in a tournament that doesn’t allow 5* heroes.

In the long run, that should make Tournaments interesting — but we’ll need to see if the changes to matchmaking have resolved the problems from the first two Raid Tournaments.

Raid Tournaments are scored based on four factors:

NOTE: Hat tip to @DracoLovesRi for pointing out that there haven’t seemed to be “extra points” for a victorious attack:

This wasn’t true in the first tournament and they haven’t announced a change. You get 40 points plus 20% of the difficulty bonus for each hero killed.

New as of the Second Raid Tournament:

The amount of Difficulty Bonus is increased and has more emphasis on the performance of the opponents Tournament Defense Team.

The Difficulty Bonus originally seemed to me to be a little esoteric in beta.

Each week has ONE Special Rule in effect.

(At least in beta; it’s possible live Tournaments may sometimes have multiple Special Rules at once. If that ever happens, I would be surprised if we see that before core elements like matchmaking are working properly, so I anticipate a single Special Rule for the foreseeable future.)

The possible Special Rules are:

The Special Rule affects both Defense and Offense teams.

As of the Second Raid Tournament, loot was temporarily reduced:

Loot will presumably remain reduced for the third Raid Tournament, but we’ll see when Registration opens if that’s still the case.

Please see these threads for existing bug reports before creating a new report:

Which team for defense and why? 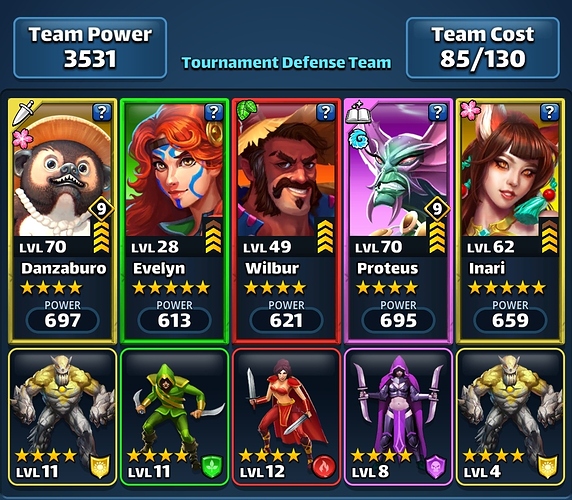 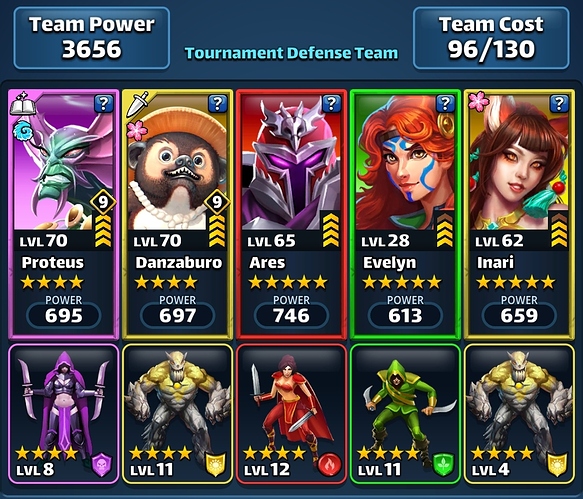 I’m thinking that I will go with a mostly fast team and some minions in lieu of healing.
Sonya+ - Buddy - Gravemaker - Magni - Caedmon+

I also pondered Inari but don’t think she will get use of her special in the wing. My other 5* hitters are not ready, apart from Greg and I think caedmon+ has an edge with speed. And they’re basically all support for a fiery burning deathball.

Edit: being that cleanse is pretty important, I might switch to:
zimkitty (3-70) - magni -buddy- grave -caedmon/sonya.

Edit3: no. no buddy tank

No resurection? Counts this also for the Fighter-Class?

I think it will also count Fighter Revive and not allow that, but I’m not sure we ever managed to explicitly confirm that.

I’ll probably change this 20 times, but here’s my initial idea for Defense while sleepy: 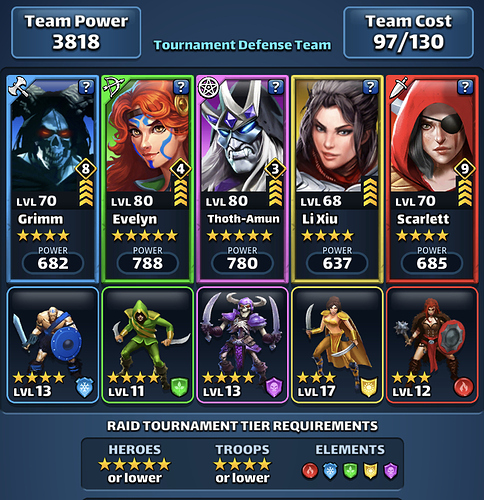 And what about Elkanen? Does it mean that any effect which increases HP in any way will not be working?

Elkanen will very definitely NOT heal himself for damage dealt.

Would be nice to know for sure if the fighter revive will be working or not.
My team will not be including alby, and who will be in my team will be a very tough study I will need to do later today.

This is what you need to know to compete in 5-star Bloody Battle.

Revival is not healing and it will still work. Alby, MoNo and the other revivialists / Fighter class heroes can come back from the grey lands.

I don’t think this is accurate. The game text explicitly says “or resurrection,” and I saw this elsewhere:

I can confirm that revive is considered healing. I battled MN. She revived tried to revive Kage and couldn’t - three were dead and Kage was the only one trying to revive. The cloud/spiny effect happened so I could tell had it not been removed, Kage would have been revived (while Grave and Alasie) would have remained dead. But nope, they all stayed dead.

If this stays as is (which I’m not against btw), it should be clarified that resurrection is considered healing.

@zephyr1 I accidentally posted this to the wrong thread. How can I move this over to the strategy thread for the tournament? I tried deleting but the forum wouldn’t let me repost.

Revival is not healing and it will still work. Alby, MoNo and the other revivialists / Fighter class heroes can come back from the grey lands. Generally with poor prospects for survival in a world without healing. And really if a hero can’t return long enough to fire their SS, is it worth the trouble of bringing them back in the first place?

The description say ressurection have no effect.

Well that’s new. I’m pretty sure it was allowed in beta.

These last few posts need to be moved too…

Welllll… I have one 5* hero, and that’s Ariel… I’ll participate for ■■■■■ and giggles, and hope for a lucky loot roll in the bottom half of the results

Hello, No care possible but do you think Leonidas and elkanen are concerned? (They look after themselves …) things are not very clear about this careThank you for your answer

@madmarv @yelnats_24 All set, I moved everything over, and set the other thread to auto-open when the actual Tournament begins so it doesn’t get more posts about team selection & strategy.