Alright guys, be nice if you could gimme your two cents on how I should compose my defense team once Alasie is maxed.

Concept 1 would be the “anti-stack” flanks which would be more defensive: 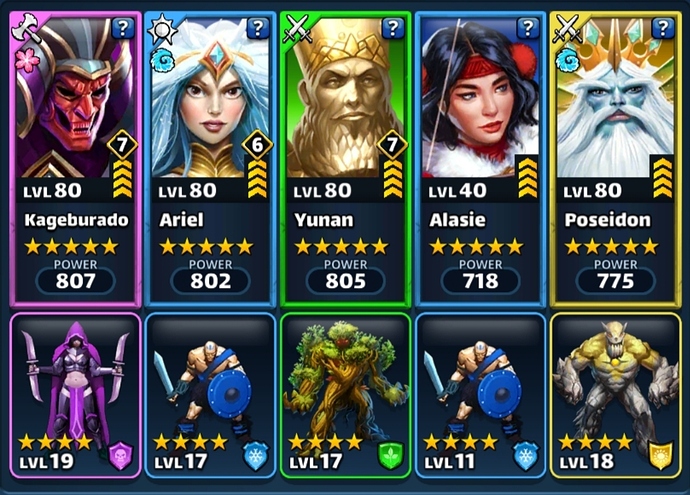 Concept 2 would be the fast-hitting flanks which would be more offensive: 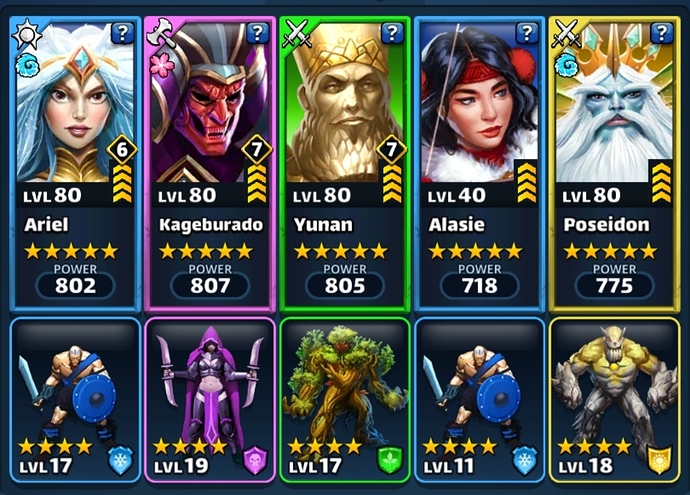 Which concept is more likely to perform well in your opinion and why? Or would you suggest a completely different lineup? Thank you all!

2 blues + 1 green in defense with no gravemaker insight makes stacking greens in a 3-2, 4-1, or 5-0 formation a pretty easy decision since it recieves no resistance

I’d go rainbow as well but the only red 5* I have are Azlar (maxed), Anzogh (3/70) and Grazul (just pulled) and I don’t think any of them would make my team better than this…

I usually want to know the rest of your roster before giving leveling advice, and team advice. Both are interconnected.

I often neutral stack, 3x or 5x, if a defense has flanks strong against a center’s weak color.

Concept 2 would be the fast-hitting flanks which would be more offensive:

Often team set up is comprise, compromise and more compromise since one hero has to be the center and two heroes have to be flanks. Would be interesting if “W” formation defense team or 3 versus 3 ever gets implemented.

Thank you for your input! Here’s my roster: 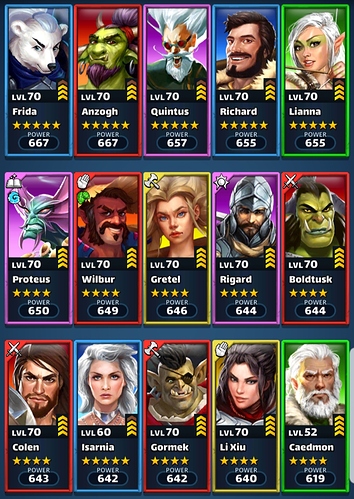 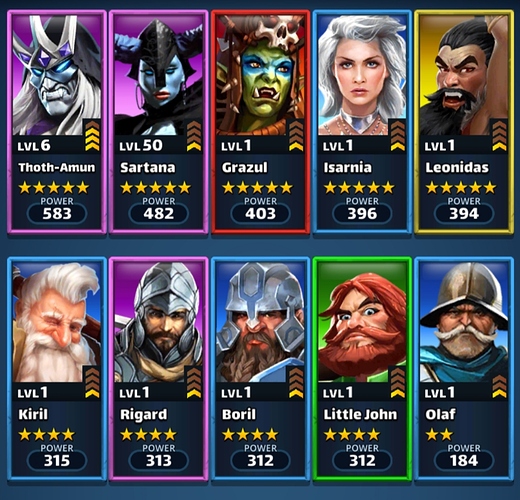 Boldtusk is nice in flank, or corner.

I would bring Proteus to 4*+18, Proteus is awesome against triple bosses.

I use him at 4*+15 for my low Platinum defense center.

I would bring Rigard to 4*+18 since different color than Ariel.

But I prefer color stacking, team synergy and broad roster over so I emblemed one of each class to 4*+18 first ( use emblems to get more emblems and 4* ascension items ).

Thank you very much for taking the time to give so much helpful advice, I will definitely take it into consideration =)

First option just invites a green stack like @Rigs said but at the same time, hate losing the family bonus for Ariel and Poseiden.

I would try
Kage Ariel Yunan poseiden alasie simply because they’re all great heroes and while it would still invite a green stack, at least Ariel and alasie are separated from an eve three hit.

What if he tanked ariel in between yunan and azlar?
I haven’t faced her enough at tank but seems like 24% boost would be quite a difference maker for slow heros and she has a better chance of goin off before death than yunan

Or some other combo

Ariel isn’t a top tank imho. Not worth using over Yunan. just read a post about how Grazul can neutralize Yunan so maybe not I never have problems facing her and usually stack vs a flank when she tanks.
The mana boost is nice, but she’s more similar to Viv as a tile dump from my experience raiding her.

Our alliance stopped using her for war tank as well when we go blue.

Ariel used to be my tank before I got Yunan and she’s still my tank in wars. People used to think she’d be an amazing tank, they even suggested to me that I put Ariel in the tank position and surround her with slow AoE heroes only. She used to perform well, but now that our war opponents get tougher she doesn’t seem to be doing such a great job. But I haven’t spent much time thinking about which of my ice heroes could be a better tank. I just maxed Alasie and can’t max another ice hero for some time. Richard would probably be the best choice. But if I want a replacement quickly, I should probably go with Boril, cause he’s always a problem for attackers and wouldn’t require telescopes.

It’s true that Grazul poses a problem for Yunan - provided she fires just before he does. But he still stays alive insanely long and can revive, so he’s got that going for him, which is nice.

Hi sorry to jump on your post.
When using a green tank for defense I wars what colour would you set flanks to? Red or blue?

Blue would be the most logical, but I’d go two purple or one yellow, one purple and two fast snipers on wings.

Blue flanks are strong against red stacks against the green tank, but a 3-2 red/green would be effective against all 3.

Depends. If your whole alliance runs green tanks, putting up a blue stack would defeat the purpose of making the enemy run out of red heroes.

In general, if you set up blue flanks around a green tank or green flanks around a red one or red flanks around a blue one, smart opponents will stack your tank color so your tank still dies relatively quickly and then it becomes a piece of cake because both flanks can be taken down with ease. That’s why rainbow is still the best strategy. But with yellow and purple, the flank strategy works better.

@Sallou I will give an example using my roster, on my alt #1 my only green tank is Kashhrek, so for his kind of skillset I would put two blue hitters. Grimm and Sonya. With Proteus and Li Xiu in the wings. This set up will cover the majority of the bases and mess with the enemy’s mana. And since I have Sonya’s outfit depending who I am facing, I can switch to team cleanse if need be.

Post your roster so we can have a better view on how to help with your team.