Are you purchasing the loot from the balloons? If that’s the case, you also have to take into consideration the amount of time it took you to earn that money.

Naturally, if you earn over $100 an hour, it’s probably peanuts to you. Quite different for me, though.

Let’s take a look see at my last Boblin Galloon recycle loot… oh, here it is. 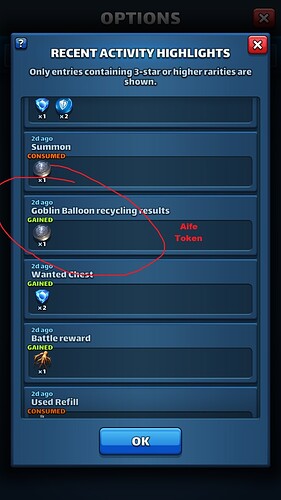 Then I scroll up a bit…

Now I already showed you my very nice MV loot from last night. Here is a lesser nice one (but still relatively decent) from a day earlier: 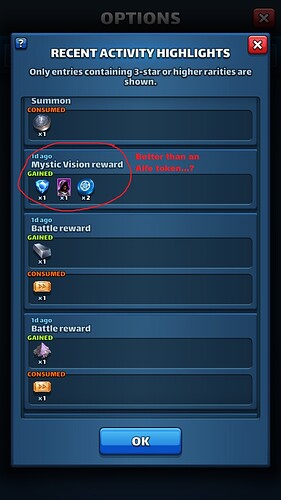 You might say that a silver token is worth more than 1 gem, 2 emblems and a trainer hero. But I would beg to disagree.

Please tell me where I can cash mine in and exchange them for something that is actually worth 150 gems.

Are you purchasing the loot from the balloons? If that’s the case, you also have to take into consideration the amount of time it took you to earn that money.

Nope, I spend nothing.

I have no idea what my last Goblin recycle was, but from some of my previous screenshots there were either gems or silver summon token, in addition to 100k of food and iron which is always welcomed and not something MV give. So for me, on average, better than the MV, which only emphasizes again, that my experience is different than yours and so my view on the two is different.

I’ll just once again point out again that you can fill all of your chests, kill all the titans, recycle all of your balloons, and still also collect your MV rewards. This isn’t an either/or kind of situation.

For me personally? Clicking on the MV is just part of my daily login routine. Log in, collect my hams and irons, click on MV and let it run while I warm up my coffee or turn on the TV and find the morning news channel, etc. It’s done and over with so quickly that I don’t even think about it. Then I hit the titan and proceed to level up my heroes, do my quests or fill my monster chests, whatever I have planned for the day. MV is just so stupidly easy, I can’t think of any reason not to click on it. Even if it only yields 1 gem. Is it taking away from anything else I was doing at the time? Not at all.

It’s not like I sit there and intently watch each advertisement and think “ooh I must buy this” or “I must download that”. Majority of the ads I get are for stupid things I have no interest in. But if some advertising company wants to give SG 10 cents for me ‘watching’ it, and SG wants to give me a couple of gems or whatever in exchange for briefly feigning interest in some company’s product? Sure, sign me up.

My complaint isn’t too far off. I’m new to this game but seem to be progressing decently.

My plaint is that l have a 4 star that I’ve been trying to ascend for a while. I join every tournament, attack every Titan, etc., which is the only way to earn fine gloves and orbs of magic(?). To this day, those items are never given in a drop, ergo l cannot ascend my hero.

The irony is that in order to score/place better, you need stronger heroes, which will forever be out of my grasp. Maybe this is a way for you to generate money as these items are sometimes in packs that l see advertised, but it might be nice to give the little guys a break.

This is a very common issue, especially for newer players.

Unfortunately the only “guaranteed” ways of obtaining these items without relying on luck of the draw is through certain quests that don’t come around nearly as often as they should.

Be on the lookout for these in particular:

The rotation of the six quests is:

A new rare quest comes around approximately once every two weeks and remains for just one day. Each one consists in five stages of progressively more difficult enemies. The Team Power level of these stages varies at approximately:

Because of this, not everyone can complete the event, and it is necessary to employ skillful tactics in order to do so. Enemy and boss details are provided through the links above to each rare quest listed.

The rewards for completing a rare quest are two separate rare ascension mats, awarded to those who complete the 4th and 5th stages. More common ascension mats are rewarded on the earlier stages (such as Training Manuals and the like).

You will probably need at least a fully leveled team of 3* heroes in order to complete the 4th stage of these events, which is enough to get you an orb or fine gloves (but probably not strong enough to get you poison darts or tomes of tactics, but these items are for 5* heroes; if you are still working with mostly 3s, your first focus should be on leveling up 4s first before you even think about starting on 5s).

Thanks for the insight. Twas very helpful. Attached is what l currently have. I recently acquired two other four stars that I’m in the process of leveling up, but they’re both upper 380’s. A slow, but steady process.

Thanks again, my friend.

Normally I don’t complain about loot because like whatever. But this war chest with 100% participation was so bad I couldn’t ignore it. And I’m one of those players who can justify a crap war chest even with 1 EHT.
If even I think this is bad, it’s real bad

Crap war chests are the reason why I stopped participating in wars. They are time consuming, stressful and after a month or two you get 1x CC key, a grey token, 20 gems and 30 emblems.
I just join wars here and there when I need war attacks for my POV.
SG should definitely do something with war chest rewards.

To rub salt in my wounds, I was the highest scorer this time round by a mile. I don’t expect three to four 4* AMs, I don’t expect even one.
Just one…one EHT is enough to satisfy me, but no. This has to be one of the worse war chests I have ever gotten

At least you got the rarer 3* AM, loot tickets, a trainer troop and 1 bomb, at the cost of 2 lesser gems. I essentially got nothing

FWIW, I find that war wins usually offers some aethers (even if it is a 3*), so that’s something. Even if the war chest itself isn’t that great, to me, it’s just another participation reward. If you don’t like doing wars, then it’s not worth your time then. I guess it depends on your alliance as we don’t overthink it too much, but using 6 flags normally doesn’t take too long.

Yeh, thanks, made me feel like my chest wasn’t the worst

Yeah I’ve had a couple of war chests with 3 gems each by now, and no EHT or ETT even. It’s so bad I’ve stopped caring whether we win or lose wars, I just war for fun and for PoV now

I track my drops. These are the stats for war chests (sorry for the terrible Excel to text paste) since Nov 18 2021:

This isn’t something you fill quickly. It takes longer than a month. For such a difficult to fill chest, not getting anything decent is a slap in the face each time.