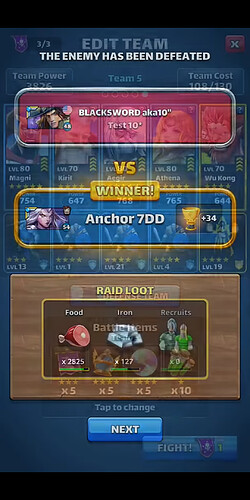 Anchor use aegir on his beta account. He said it on that video.

Good point. If aegir is awesome, he should have pulled aegir and maxed him. In the video aegir is flanked by awesome heroes that’s why it appears aegir is great when in fact his teammates are doing most of the work. It’s kinda he is being baby sitted.

No other 5* blue heroes.
5 other maxed 5* heroes and maybe 3 others in the works

Should I max him or not?

If you think that a maxed Aegir can’t stand at least in diamond i think you’re absolutely wrong and too much influenced by your own negative judgement about him. He is not so tanky as it suppose to be, but i don’t find him completely terrible and i even lost a couple of times if he is flanked by two fast heroes.
And if you are at 2400 cups or 2900 the rewards are the same, so that’s why having the best tank avalaible (aka Guinevre right now) it’s just for the glory.

At least you can use Aegir for titans and raids if you want… to lose quickly!

There I fixed it for you!! LOL

No, i don’t think he is bad on attack, on reverse a triple stacking blue with him could be really effective especially in raids.
Less effective on titans because of the low attack, but giving up on some damage to survive more can be a viable option on 12* titans.

This game really means all attack. You using your cards only to attack something.
It is the only “active” part of the game. Defence means just place that card there and never use it.
That’s why i find more regrettable ascending Guinevre then Aegir. She really can’t be used anywhere else.

Or you even think that Guinevre is a better attacker then him?

Me too have Aegir. Because I am lucky.
Maybe Mr. Anchor not so lucky to have him.

I know how Aegir works.

Have a spirit link for sharing damage

Thanks God for giving me Aegir…

[Edited by Rook. Trolling is against Forum Rules.]

I also have Aegir maxing first Wilbur. Then maybe aegir when a fix is in place.

Soooo obvious question here… if Aegir so amazing, why wouldn’t Anchor pull for him?

Where does it say he didn’t pull for him? Just because you try for a hero, doesn’t mean you get him… surely you are aware of that? Or are you of the opinion that Anchor can just pull any hero he wishes?

Should I max him or not?

If anything has become clear in this thread, then the following: you have the hero, I expect you have used him… so decide for yourself, according to your roster…

Because, people should make their own decisions, instead of always looking for someone to make the decision for them.

I use @Anchor’s hero guide as a reference only, and tend to form my own opinions as to which heroes best suit my playstyle as well as which I would like to include or level on my roster. It has been helpful in some ways but at other times, I find my own judgment and use of a hero to be better than what was actually listed in the guide. Thus, there is only one thing I would like to add to this thread as well as to any other thread concerning the grading of HOTMs, Season Heroes, and any other heroes that might be released over the coming months/years.

With new heroes being released at such a rapid rate, it is difficult even for seasoned or beta players to actually finalise the full utility of a said hero. The permutations are crazily diverse, and to make matters worse, many players have now a large enough roster to stack single or double colours against any given tank, making even Guinevere a soft target in that role. We all settle into a certain playstyle after a while, and it is appropriate that seasoned and beta players will get comfortable with a certain setup that they use regularly. Mistakes can happen when evaluating the effectiveness or utility of a hero; in part, due to the lack of proper testing in relation with other heroes on the roster or, it may be due to the speed at which such an evaluation was made.

I do not have Aegir, and I never wanted the hero. But I do understand the frustration of many here who are concerned as to the A grade received by the hero. If the majority feel that Anchor is wrong in his evaluation, then maybe it is time for Anchor to reexamine Aegir, as well as for others to share their experiences in the use of the said hero.

Would it be too much to ask for videos of Aegir encounters if you’re really certain that the hero doesn’t fit into any of the A grade roles provided on the guide… And if you’re certain that it functions as intended, wouldn’t providing evidence of such a utility be better than ripping each other on a forum?

You have Aegir, and you might have levelled him, or not… Let’s work together and see where Aegir actually stands, and whether a request for Aegir to be buffed/revised should be forwarded to SG. And if Anchor was wrong with his overall evaluation, an apology and forgiveness is all it takes. It’s a game afterall…

TL;DR It’s a piece of ‘reference’, not gospel. Use it with caution.

Next time, save your hams!

7DD website has all of the cards, on a searchable link.

40k worth of hams… that’s a hella amount of minor healing potion right there!

Basically the bottom line I’ve come to with aegir is this:

Good on survival for tough raids or titans

Defense: he can be a good tank if you lack better choices. Basically if u want a 5* tank and you dont have other hotms or event 5* then he’s probably the best choice(although i would still prefer justice but that may just be personal preference)

pretty close to the same conclusion anchor and friends have come to.

I dont know who sits where in the grading system but just from conversations I’ve had it seems like this is about where aegir sits in tank ranks:

I dont know if I’ll max him to put in tank over alasie or drake since either one of those pretty easily keep me above 2500 cups, and above 2600 on a good day. But if i didnt have multiple hotms, then i could see myself maxing him for that role over thorne or other regular 5*.

I wouldnt ever recommend aegir to be someone’s 1st maxed 5*, there are plenty of others that are more useful in my opinion. Aegir is just a luxury if you have no one else to work on or dont plan on getting anyone else to work on. He’s not a better tank than guin, but he is a better hero in the sense he can be used for more than just a defensive tank.

Reminder to everyone: please remembers to follow the forum rules - let’s keep this constructive and civilized. Absolutely no personal attacks are allowed.

Forum Rules Last updated: January 3, 2020 This forum aims to encourage vibrant discussion amongst players of Empires & Puzzles. The forum is intended to be a fun and safe platform to interact with other players across the globe - of all backgrounds and beliefs. Remember that you are responsible for how you express yourself. We ask that everybody keeps the conversation constructive and civilised. The Empires & Puzzles forum staff and moderators monitor all posts and reserve the right to remov…

Working on it lol

A hero’s worth is nevertheless relative; who/what are you fighting and what synergies can you milk from your different options of team composition.

Well, that’s exactly the problem with this specific hero.

Nobody seems to know what composition is best to Aegir, Most of the people that praise him don’t have him.

Of those who have him, no one thinks he is good at all, except @Anchor, and as per @Rigs comment, he just would not share why, where, how, or when he is good for what.

Which leads us to:

it’s a free guide nothing more than that if you don’t like don’t use it, problem solved

In this specific case, it’s not problem solved, since many Aegir’s defenders, including Anchor himself, use the guide (and nothing else) to “prove” he is good.

This attitude has been keeping players to have a productive, fact based discussion about this hero’s strengths (or lack thereof), and (many) weaknesses.

That is the problem with Anchor and his guide.

Other than that, I agree is a reasonably good guide, and thank Anchor for his work.

If there’s anything from my comment that needs further explanation or examples, i can do that

So you think the personal attacks on anchor are justified because most don’t agree with the rank aegir got, if you believe some people here it seems to be a conspiracy to hold players back

Can you please share how is it that you get best results with him? lineup, etc.

I do have him, and my experience is quite opposite.

Winters and others - even in top alliances, there are very few people who will spend whatever it takes to get heroes. Almost all of us have a budget, and while it might be more in a month than many have spent total in their entire alliance, that’s no guarantee you’re going to get the hotm or event 5 star in your budget for that month. Even the person in 7DD with the most heroes is missing 2-3 special event 5s.

Yes, I think @Ber’s comments are personal, too. but I think he is the only one going that way.