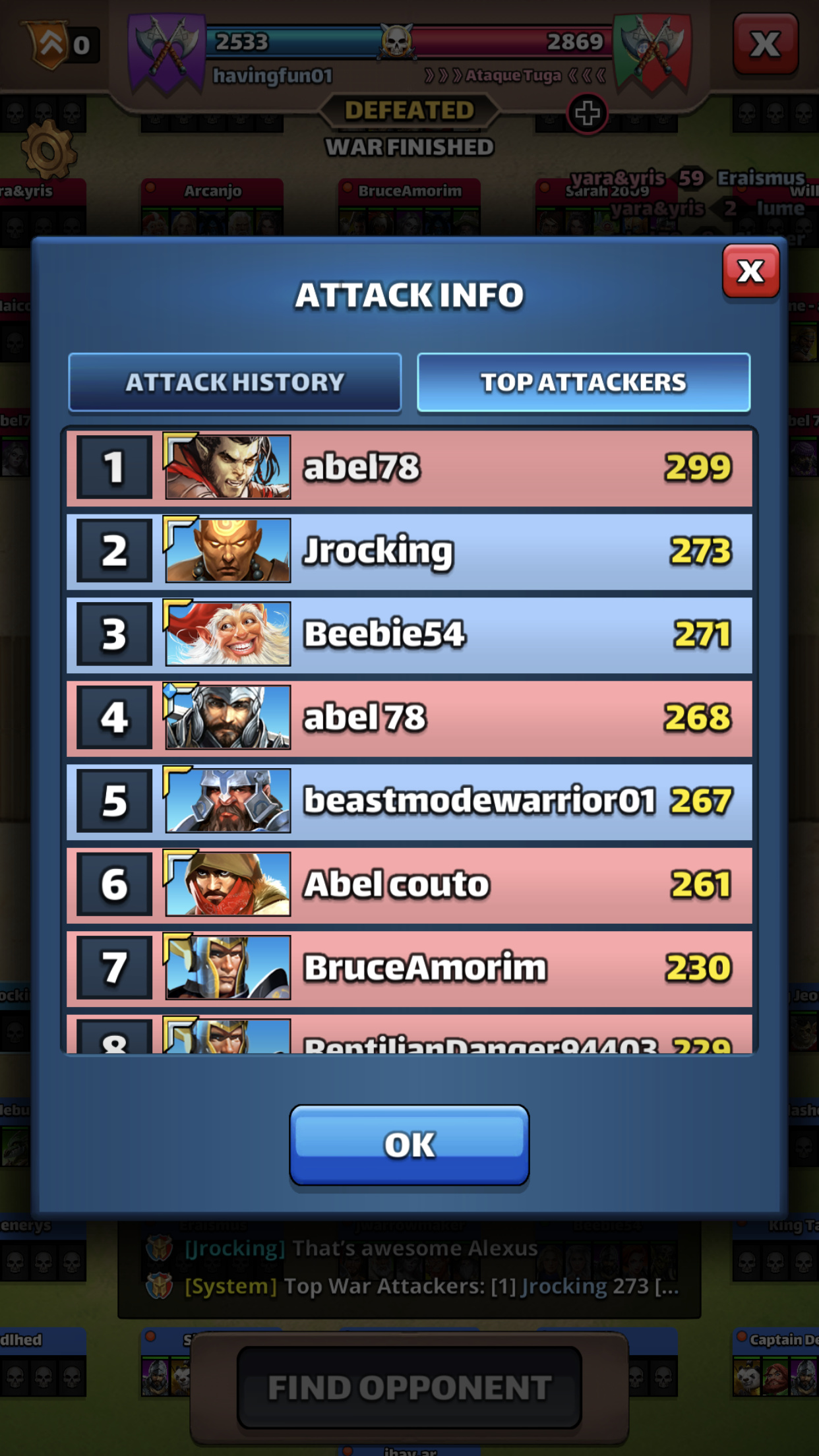 Just so u guys see I wasn’t bs Ing about me usually being in top 3 attackers, that was most recent war, I know how to play but my whole argument was based on they have more powerful total team members compared to my alliance giving them the advantage in scoring. I don’t know how this argument went side ways lol. Again im done with this subject. U guys won’t see me post about this anymore

King above gives a stack example above, as if it proves some point.

That would shut me up.

Last thing than I’m done with this subject

Again im done with this subject. U guys won’t see me post about this anymore

Thank you for actually following through on your promise. I hate when people ask for video evidence, get it and then still refuse to accept they’re wrong. Good luck in future wars!

I ran some numbers of your War matchup.

Their team had more overall team power of 2,696. So the equivalent of an extra 2/60 Elena, 3/60 Sabina, 3/60 Kiril, 3/50 Bane, and 3/50 Isshtak. So like, if you copied your bottom player and scattered him disproportionately throughout their alliance.

Divide that amongst 25 members and its 107.84 per person higher.

But on TP of defense squad alone… does the community feel 100 point average is unreasonable?

And if so, do you feel there are enough alliances with similar and near exact numbers of your own, scattered as proportionally as yours, with 25 members?

hi, about matchmaking. some guys in my alliance since our last defeat started with this new theory about inactive players. for some reason they belive that if the strongest players in an alliance do not play for at least 3 days they are marked by the sistem as inactives, and when the war matchmaking start the inactives are not taking into account, and that result in easy wars.
i don’t share this theory, so im here asking. does that work? this is one of many, to me instead of using real strategy my friends are looking for magic formulas to get easy wars.

Nope. If a player misses two wars, then they are removed from matchmaking. That’s a whole week of inactivity.

yeah! i mean that tnxs. sorry for my terrible english.

Your English was fine. We’re just pre-morning-coffee still for many of us

Good luck getting your alliance mates to reconsider their inactivity. They’re just missing out on chests and world energy for no benefit.

I’m a Co-creator of our 600+ day old Alliance. I was the Co-leader… unbeknownst to me… I became the Leader because ours SUDDENLY left due to the frustrating aspects of the War battles. Nearly half of the Members followed suit.

Keyo that’s not the reality though and a leaning interpretation of it at best.
They dropped their 3 lowest players us none. They had one guy quit during as well.

Yet the bottom line is you can look and still say us giving up points across all 24 teams and them giving up not one of the entire lot is in any way shape or form fair… You may wish to pose the next question about how fair is your judgement.

Clearly by that match they place us as the stronger alliance and we give up a ton of points to create the supposed “fair match” Then ask yourself, why do we get blown away by 500 points while using 33 more flags?

Because it’s a flaw in the match system that allowed a team with 10’s of millions more experience points to also have a power advantage across the entire match.

On troops - incorrect assumption, I factored troops into TP on both sides, so that’s included in the 107.

I’ll pose the same question to you… is there an inkling of possibility, that your alliance isn’t that good at War? Nobody has answered this question. Not one person. Why is this question always ignored?

If you put me up against Lebron James 1 on 1, while that may be unfair, it’s not like I’m raining threes and crashing boards if I’m playing my neighbor in the driveway. Just because I’m playing the game, does not make me good.

I’ll repeat the example from my own alliance. A (now previous) member with 3,915 defense team would average about 10 - 20 War points per war, against an alliance with a 3,850 average TP, while using all 6 flags. Do you believe her score is indicative more of unfair matchups or bad play?

If you guessed bad play, now I want you to imagine a whole alliance of people like her, or even 2/3rds… 1/3rd.

The algorithm can’t calculate alliances being bad at the game (read: user error). It does the best it can based on similar stats and participation, but if enough people are bad at AW in the same alliance, that will reflect on your War score compared to an alliance that is good at AW.

So, was your alliance at a minor disadvantage in this particular case? Sure. No two alliances are alike, this will always be the case. Sometimes it will favor you, sometimes it won’t.

Was the difference statistically significant that no alliance could have overcome those odds? Negative.

Do you believe their alliance is good at War? If yes, that would attribute to their win.

Do you believe your alliance is good at War? If no, that would attribute to the larger gap.

I think the part I’m having trouble with, in these complaints, is that people with alliance members with an average level of 31, think that just because they’re using war flags, that they’re being effective.

I think your alliance just may not be able to hit a three, bro. And that’s not an insult. It’s not insulting to admit it, either. Just keep practicing, getting better, and you’ll see yourself on the other side of things.

I hope you just woke up, because both things you said were in contrast to reality.

First being if I think our team is good, and me avoiding the question. My response is still there… I say, “Clearly by that match they place us as the stronger alliance.”
So I even give you the games way of also agreeing with that assertion.
Example also given of a 24 of 24 advantage to the opponent.

As for your second incorrect attempt at how math truly works.
Using your teammate average as an example.
The average depends upon who they are pitted against… as that is the other 1/2 of the equation… a low average may be expected if they are outmatched every match, as that is the biggest factor in the average.

Just for record, their first 19 flags averaged 48.6 points per flag… I did not do ours as I already knew we don’t do that sort of average ever against teams. Highest team average for us I ever ran was in the 35+ range. Far from 48…

I that war had an unusually poor showing… And I know it had a normal affect on the score, as that too is the funny thing about math and averages… “it” unlike you does not suddenly place all the weight on everyone playing bad in a single match to make it all make sense.
It happens in both directions, as Perri this war gad a great game, Rubber last war hit low… The war before that Neener show below average, the game before that i don’t recall… But as you see it’s an average of one in our top core does bad and remains in average…of no effect either direction.
Not 24 like you must do to make an outrageous claim.

I can’t work with this…

The game has it out for you. You guys all know exactly what you’re doing, except that the game keeps screwing you.

That’s life, you know? Everyone else you guys play catch all the breaks, and that’s why you guys can’t win.

Burn it down. Burn it all down.

What I’m saying is. There is a flaw in the match system…
That doesn’t take a genius or a leap to grasp… Simply look at the reality in front of you, in not only posts… But in the multiple attempts and tweaks the devs have imported to address it.

Some are just pointing out what we hope the devs address in a future update, and how we see it manifest itself in matches…

Ok. I hope the devs make it better for you, and other people from inexperienced alliances.

Maybe we just have different standards, expectations, and definitely one of us suffering from inflammation of the ego.

Prior war was a -316 point average across all 24 teams…
This war you said -100…
even if I take your word. The back to back proof should tell you that your missing the obvious without my help…

If we are so bad, I hope they downgrade us enough, they match us to you, within the next few months.

If we are so bad, I hope they downgrade us enough, they match us to you, within the next few months.

What does 300 point difference across all teams even mean. You cannot see everyone’s bench and lately …from all the replies in here of people having issues…there’s only a few left complaining. Some have probably abandoned thread but maybe things are much better.

The people who actually have data or could make changes (i.e. mhalttu) aren’t participating in the discussion. And no one who’s upset with the matchmaking has tagged him in lately and offered to share data, or asked for his insight, or demanded an explanation (as we sometimes do here) or anything really.

So, given the above, I’m kind of assuming now that this thread is a bit like the “show me your worst 5* team” type threads. It passes the time, but no one is seriously expecting it to go anywhere. That’s probably why so many people have disappeared. The debate just isn’t their kind of fun anymore.

Yes I agree, I check into it hoping to help from time to time or have a discussion with real data but unfortunately it has become somewhat toxic. Wish some insightful thoughts were not so buried.

Edit… and at one point mhatmu was looking at specific war matches when given the alliances involved and explaining in detail how and why the match happened.