I’ve said elsewhere, screen shot your matches (war scores); if you keep getting rotten matches, and can prove it, please send the data to SG in a ticket.

Welcome to the Small Giant Games support page. How can we help you? We have ready answers for many common questions about Empires & Puzzles.

How long are we going to let this continue? It’s completely ruining wars. This is the 3rd war in a row we’ve been in where the Leader and majority of the enemy top 10 joined the alliance less than 3 days ago.

There are so many simple fixes. The easiest we came up with is simply attach war scores to the players. If you switch alliances, your score follows you. Problem solved. Or add a timer upon switching alliances. Switch and you’re out of wars for 10 days or say the next X number of wars. Delay their chest and it defeats ththe purpose you’re better off just staying put.

Come on SG…clean it up please!!!

Example from our current opponent. 10 of the 30 have similar last joined times while the rest have 130 days. They didnt just magically recruit 10 x 2400+ players overnight. Its freaking dumb: 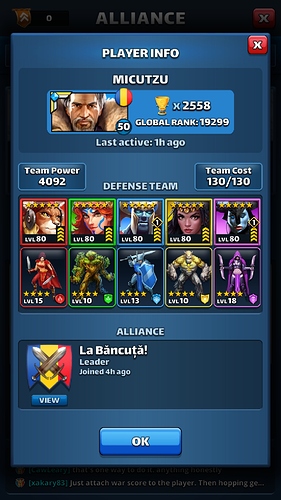 I have not seen it…

It has happened the last 3 wars in a row, it’s not mercs.

The alliance maintains a “zombie alliance”. Once they fill their war chest they swap over to the zombie for the next war chest. This allows the past performance component of their war score to reset therefore giving them easier matchups. They just swap back to back and forth between alliances as they fill chests.

It’s just like sandbagging in golf. They are manipulating the system to get easier matchups.

This happened to us last war. We lost by over 2000 points. They reset us 7 times.
This isn’t clever strategy. It’s pretty obvious war scores are being manipulated by just making a new alliance, thereby erasing their previous war performance.
Arguably an alliance can win 100% of their wars this way.

Either they were already in for matchmaking or they won’t take part.

We are speaking about alliances deflating war score by adjusting their “past performance score”. They do this by creating new alliances and moving around en-mass.
What does that have to do with opting in or out?

Possibly a restriction time of say 3 wars after joining would calm down that strategy a bit.

But in my opinion it isn’t manipulation, it’s just annoying behavior to exploit the odds of winning. I’m even not sure, if it’ll work properly.

What could they gain by constantly jumping alliances. The chest is tied to the alliance not the player, you win in alliance A then switch and war in Alliance B, the chest in Alliance A disappears. Nothing gained; everything lost…

Alliance A wins wars, fills war chest, moves all players to Alliance B

That’s the idea. Then while this is going on alliance a and b are losing war after war

Is this not a duplicate thread? War Exploits - unsportsmanlike and should be banned

I don’t get it. Alliances still halve to play the game and win the wars. If only 10 people are rotating in/out, as mentioned in the example above, youblean to tell me that they can win a war all by themselves without the other alliance members or alt accounts holding their own? They still have to pick the right heroes and get good boards…everyone complains about bad boards in every war in every alliance I’ve ever played in…all of a sudden these people are immune to that? This seems like a whole lot of work for a slight potential advantage. And I’d people are willing to work that hard to get extra loot, God bless them let them have it. Why be jealous of other people working harder and figuring out a tactic for their gain? Everyone can do it too…and if we all did, then it would nullify the perceived advantage. I say leave them alone.

The alliance I am in has faced a number of opponents in war where enemy alliance is less than 1 week old and is made up of very high power “floater” players who change alliance for each war. These players are all marked as co-leaders.

We just got done facing the “same alliance” for the 2nd time in the last month. Same in name only. The players were a mix of some we saw previously and many new.

As I understand it players float to make super teams which maxes their wins and mins the time needed to get a war chest.

This exploit is really BS. These “alliances” we face are not real in the normal sense. They exist only for a moment in time needed to exploit the War MM into matching with weaker teams.

The players doing this are unfairly benefiting from a loophole and, IMO, are unsportsmanlike cretins.

If the players are switching alliances for every war they are only hurting themselves as when the war chest is opened they will have a very low participation amount and get very reduced loot.

Also the matching is based off the top heros of every member in the alliance at time of matching so even switching around between alliances doesn’t help get better (“easier”) matches for them either.

Players keep complaining about this “strategy”. Is it a real issue, in so far as manipulating the war matchups?

I think we need a definitive answer so we can put this issue to bed!

I cannot see how this can be used to their advantage.
You want to fill the war chest to be able getting the better loot.
What you get from winning a single battle does not compare to what you can get from the chest.

War Exploits - unsportsmanlike and should be banned

nope. only best 5 rosters from 5 members.