Come on guys how can you up the reroll but not fix the game you obviously we’re already in the game. I would like to play the game but what’s the sense if I’m going to be knocked off especially doing raids.

Yeah, you guys should make it that we can RESUME where we left off, this way we don’t lose energies/heroes (in war) and continue the fight after we get knocked off the game. You are not loosing anything too so it’s a win-win for both players and the devs. RESUME is the only way to solve this problem because it’s nobody’s fault when we get disconnected.

Hi I’m facing the same problem it’s the third time till now i deffet mythe enemies team then the game stopps and i loose every thing. Thats realy disappointing… hope you fix this issue a

I was thrown out of the battle. I was winning. I’ve lost my best team and scored 0 points. Absolutely unacceptable. I’m really disappointed I think I’ll uninstall

Same for me, just had my team set up, pressad attack and it was just loading until i got thrown out. So flag was used and 0 point.

Just happened me too.

I defeated a player in War and it went back to the battlefield screen. It has the load button over the player I defeated and you can’t exit the screen. 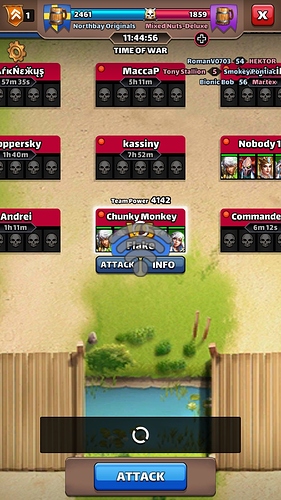 I appreciate that this looks like my connection dropped but there were no issues with it.

Oct 24 2018, I finished killing an enemy team and then lost connection. It never showed the team as dead on the battle field nor gave me points but it did take my flag???
Really your developers dont understand a transaction? If this were banking the money woul leave my account as soon as I talked to the cashier and if I did not follow through and give them the withdraw slip, I would recive no money and yet have my account debited. This is very straight forward programming for transactions and database person understands. contact me and I can create a user story for your back log if needed or explain the coding needed.

I just fought a battle in the war. As soon as I defeated the enemy the game said it was unable to communicate with servers. It the showed me 0 points. I want my points or at least my war juice back. If it couldn’t communicate why didn’t it just reset? I want my points.

My game did something very similar, but it booted me before I could even battle anyone. It counted my team as used, took a flag- but didn’t register on the chart in the upper corner that I have attacked anyone… so frustrating!!!

So I understand that this is a big game and a lot goes on. And I’ve had this happen before. But this is the third time out of my last four wars. First hit is fine. But the second or third this happens.

I was trying to upload my photos. But that’s exactly what keeps happening to me.

“Proxy server error” really getting out of hand. Since I was forced to upgrade 4separate times average the last few days I have gotten nowhere. I am unable to raid, I am missing out on the quests, and now lost my war fight, men and time and all I get is “proxy error” try again later.

Have 4 disconnects today. Energies, flags removed and losses granted despite my wins.

My husband was playing and during a battle, the game suddenly closed. When he opened the app again, he had lost a flag. There was no indication of WiFi connection problem.

@Kerridoc @Petri @Sara. I didn’t see any comments from the moderators in this thread, since its beginning, should a ticket be sent? What should be done here?

I know developers scan this category often, so I can only assume they are looking at this issue. I’m just a player myself and have had this issue on my account, too. It’s really annoying.

Thanks for the reply!

I just saw another thread about it! I’ll follow that one.

So I was having these problems before, it turned out the fault is having an old device. When I bought a new one, didn’t have any more problems. So it must be your device or connection, make sure the OS is updated and internet speed is good.