Currently I am the weakest player in our alliance, (by a fair margin) I am usually around 15th in Titan attacks, (10* titans), so don’t get great loot, and always the first to be killed off in Wars, so again get the bottom tier loot, (and feel like I am dragging the team down).

So would I get better loot if I was a mid ranked player in an alliance hitting level 6 & 7 Titans, and maybe better war results.

What’s your roster look like? I would probably rather be in a lower titan and finish up top to try and get better loot, but it’s all a gamble. I’ve been a+ multiple times and got jack. Been c grade and got 4s ascending materials. It’s all a gamble, but personally I would rather hit lower titans and be best the top

Titan Loot is based on the Loot Tier you achieve.

The formula for calculating Loot Tier:

Titan Loot Project - A Data Farming Project! Answering "What can/could I get from the Titan?"

How do I know my Loot Tier? & How Many “rolls” (attempts) per tier?

Calculating the Loot Tier is actually quite straightforward & easy to do.

Titan Loot Project - A Data Farming Project! Answering "What can/could I get from the Titan?" 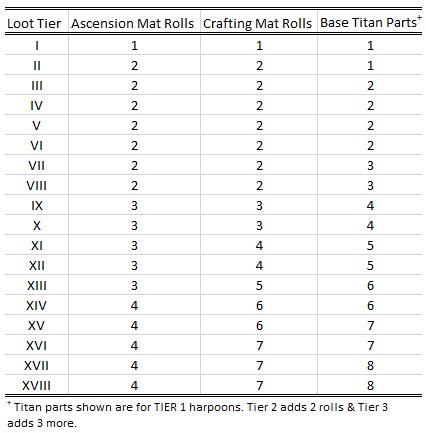 As you get a higher loot tier, you get better odds of better items… So the objective of battling titans should ALWAYS be to get better titan loot tiers.

This thread has more info on that: Titan Loot Project - A Data Farming Project! Answering "What can/could I get from the Titan?"

So let’s look at your options

So even if you only get C Grade on a 10* titan you have a better Loot tier than you could get on the 7* Titan.

Do you like the people in your current alliance and fit in well? If “yes”, my advice is to stay.

I remember 2 years ago when I started playing E&P.
I was with a beginner alliance where I hit 3* Titan and got nothing out of it.

I decided to move on to next alliance where I was the weakest player hitting 6* titan…
When alliance war was introduced I did not have army of 4-5* only 3* rosters, so I was the cleaner.
Until I was able to build better roster, I could catch up with the rest of the team members and started contributing more to the team.

If you can stay in a higher level alliance and your friends do not think that you are dragging the team, STAY WHERE YOU ARE, your progress will be faster in the long run.

Are you “weaker” because you don’t have better heroes to inflict more titan damage or is your technique substandard ? Are you learning from better players? Are you asking questions or have they even offered to help ?

I would recommend trying to seek help within your alliance and give them a change to help you grow. If that fails and you’re not getting the help you need, I’d recommend looking for an alli that grooms their own talent. You can learn so much from so many players in your alli if they’re willing and able to help and you respond well to criticism…

I don’t recommend chasing loot btw, it can ruin the game for you and make you a less desirable player in an alli if you’re purposely pulling damage to stay within a desired tier. Always do the best you can within your means, don’t worry, the loot will come…

I’ve had the best luck with loot fighting 8*+ Titans, regardless of grade. “Best luck” is possibly a misleading word. In the last 7-8 months I’ve gotten one tabard and one set of darts from Titans. The tabard was from a 10*, the darts were from an 8* rare. I didn’t hit a high loot tier on either.

I’d like to caution against chasing loot. More specifically, the idea that the grass is greener elsewhere. It isn’t - at least not for those of us who don’t/can’t compete in top tier alliances. The loot is just going to be the loot.

Being surrounded by players I respect, and whose company I sincerely enjoy, is pretty good loot. Makes all the waiting for mats a lot more enjoyable.

always the first to be killed off in Wars, so again get the bottom tier loot,

There is no loot tiers in wars. An organized team can account for various roster strengths and weaknesses.

Our alliance uses the tank buster/sweeper strategy and in some wars a sweeper can be near the top in scoring even tho they are a much lower level player, we are currently batting 8*, if you’re looking for change and a friendly, active, chatty alliance, check out "The World’s Finest "

Our alliance uses the tank buster/sweeper strategy and in some wars a sweeper can be near the top in scoring even tho they are a much lower level player,

Agree fully with this.

Any time a lower level member in my alliance starts to feel bad because they can’t “keep up” with the stronger players… I remind them that they are still very valuable to the team. In a war? If I go after a strong team and I kill 4/5 of their heroes and all that’s left is one corner straggler with 25% HP? Do I really want to waste a full powered team to mop that up? That’s not effective war strategy. Absolutely, let the sweeper get the bonus points for the finish. Then I can save my stronger teams to take a chunk out of another strong opponent. When the war is concluded? The sweeper might actually end up with a higher point total than me. I don’t care, as long as we win.

Same with titans. Lower level might be worried because they can only do half or less than half of my typical damage on a titan. So what? If it takes them 2-3 flags to hit the same score that I can get in 1-2… that’s still 1-2 fewer flags that I have to use myself to take it down.

And if anyone is under the illusion that you will get better loot from scoring A+ on a baby titan vs. the loot they get from a B or C on a much larger titan? I really don’t think so (see Guv’s post above). Baby titans almost never drop anything worthwhile for anyone.

EDIT: I think minimum threshold should be at least 5* titans if you’re hoping to ever get anything more than a leaf and a piece of string.

All the advice above is on point.

Really appreciate all of your comments. Certainly clarified my position

I am happy in my alliance and clearly it is the best place for me to grow.

Yea, been mopping up in war where I can and working on my roster.

Here for the long game.

I believe 8* titans are the real “minimum” to try for mats. That’s where you get 1 more roll. I left an alliance because it just couldn’t get past 7s. Now killing 11s and 12s, and the loot is definitely better.

Are you looking to grow as much as and as quickly as possible or would you be more happy by staying comfortable? Only you can decide.

BTW, I wasn’t exactly in love with the alliance I left. They were a bit too sedentary for me.

You will start to see the differences in ascension material dropping when you hit 9* Titan.
It is the sweet spot where at least 3* ascension materials are dropped more often and no need to pour full load of arsenals to kill the titan.

5* is the minimum level at least to ever see a rare titan. Though the odds do get much better the higher up you go. Loot on anything below a 5* is almost always going to be trash (even for an A+ score).

Side note… your username is familiar. Were you ever in an alliance with someone who went by Talisara in game? She was kind of a friend of mine, and she just suddenly disappeared from the game one day out of nowhere.