Pretty average? Undispellable reflecting of red damage and specials makes him a insanely strong tank. If you bring three or more red heroes and he fires, it’s over. Also, 400 % to all is crazy.
I remember how I struggled with Ursena tanks 2 years ago. And she hits like a wet noodle compared to this Pharao. I’d say, Ahmose is even quite a bit stronger than Khufu, who’s already on the verge of being OP.

I think Ahmose is a decent hero for most players and can be useful in limited situations. But, I agree with most of what you say cause at the higher levels of raiding/war, most slow heroes’ specials aren’t strong enough to make up for their slow speed.

Just look at the defenses in top 100 wars and count how many fast, average, and slow speed heroes there are and compare. Even though I hear things like “slow heroes are functionally fast on defense”, there’s a reason fast and average speed heroes are still used more often for all war modes outside of rush.

I think slow heroes can be good in certain PvE parts of the game. But for PvP, speed has always been overwhelmingly important and continues to be because, by and large, slow heroes simply aren’t powerful enough to justify their slow speed.

I do think ahmose’s damage is pretty good for an AOE hero and, along with his passive, will make for a serviceable tank for many players.

Unfortunately, the more interesting part of his special, the “reflect”, is a skill that is much more effective when charged and fired before the opposition’s specials. Especially when there are more and more buff immunizers like Hypnos.

Testing Ahmose out now at 3/70. Great results. I don’t really care about the reflect red, the damage output is intense.

c2 elk would be my choice 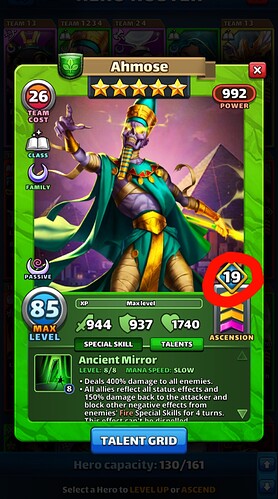 Not impressed. Slow speed means useless outside of rush wars. And unless you happen to take him on offense against teams with Khufu, and you get your tiles, I fail to see what good he does.

For anyone saying he’ll be a great tank: he won’t be. You do the same thing you do against Ursena… you simply don’t bring the opposite color. At higher levels of play, any team with 3 same-color hitters will destroy the defense team if you get your 9 tiles. They don’t have to be red, so why bring red?

I just pulled him. Not sure if he’s worth the mats… too slow for 400% damage at current meta

Sorry If that is a stupid question, but what is a full red reflection?

As i understand it, it works like Mitsuko, which is a full dmg, ailment and anything else reflection?

Yes, it is the same as Mitsuko or Costumed Guadian Kong, but it reflects damage from red instead of blue.

this hero need to be buffed to average to be useful

yes i am one of the owner, thats why i am biased

Sorry I’m also confused about this? The red reflect ability wasn’t nerfed, if anything it was improved to 150% and made undispellable? It was only the nature EDD that was removed but that’s nothing to do with red reflect?

I think he’s awesome, but I could use a hair more power. Just a hair.

yes i am mistaken, good call

He and horghall are dead from drowing in their own tears for like 3 years ago. 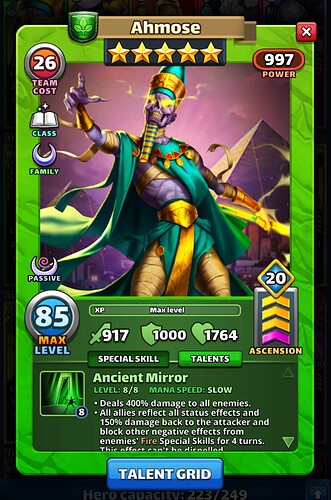 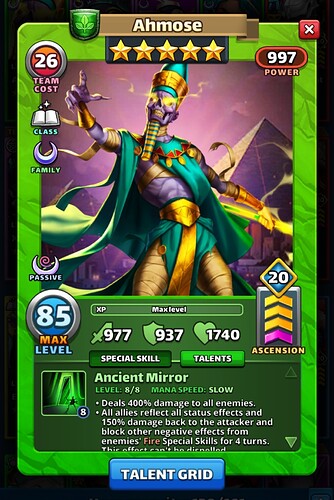