After the most recent heroes they are releasing its time

After the massive power creep on some of the most recent heroes, I think we can all agree…it’s time to overturn the nerfs you placed on so many heroes. If heroes that were nerfed before would be in line or below the current level of power creep, undo the nerfs! <3

Is it Time to BUFF the NERFED heroes to their original form!? Gameplay Help & Tactics

I’d rather them buff heroes who most need a buff rather than heroes who were previously nerfed.

Agree with @Ruskin505. There are many many heroes who’ve been labeled premium by the portals they come out of (not just S1 heroes) that have been collecting dust since their debut. I don’t care about my Telly or Vela any longer. They still have a place somewhere. My Sargasso, on the other hand, has been a different story.

I’d rather they got rid of less played heroes and gave players options for replacements.

But even this would cheat new buyers. If players invest in pulls to get that special, if that hero gets nerfed or its context gets buffed, they don’t retain what they paid for. In effect, they get scammed.

I’ll sign the petition. Restore my tell vel and odin.

In the end, it took about an hour for this post to be approved.

Agreed. They boosted Anton then nerfed him cause his special passives were too strong then introduced season V heroes with much better. But I guess that’s the point. Make players keep buying the new shiny heroes by nerfing past heroes. Rinse and repeat.

How’s this for a power creepy… 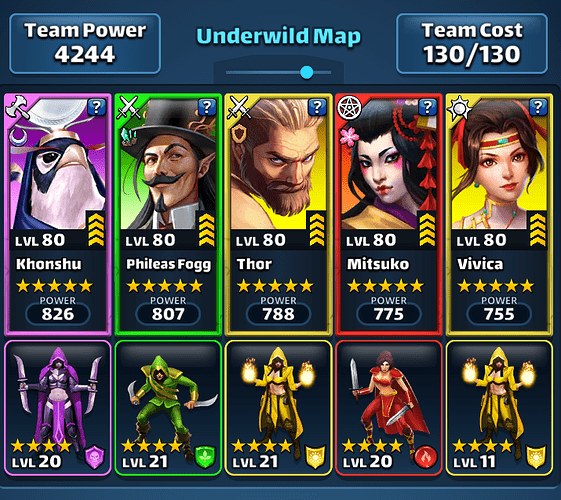 Not really feeling the concern. We are in season 5 and the game is obviously progressive from all angles. A normal view was early players were ascending just about any hero they pulled. The more practical view would be to only ascend the heros you actually need for longevity. Do not ascend every imaginable heros but only the ones of true value. Guardian Heros and event heros have always been very long lasting. Just like chess you have to plan your moves and think ahead. We have all ascneded the wrong heros and learned the hard way. Take your time and strategize. No biggie.

sure, the game is progressive, but some players haven’t even gotten a season-2 5*, let alone one from Season 4 or Season 5… i’ve been playing 5 years, and only have two Season 2 5s and one Season 3

power creep is less of an issue IF the chances of getting the newer 5s are greater… but they are not. many still have to make do with the original S1 5s.