Advice for New Players, or "All the things I wish someone had told me when I first started."

I agree too. They can have more rare quest, or even more frequent elemental chest or even better loots for tournaments or war or titans.

Have been mostly A or A+ for a 7/8 stars titans. Zero ascending items for 4 or 5 stars hero. The last one I got was back in July 19 (never skipped any daily titan hit). Have now 20 hero sitting waiting for ascending items. I do not mind the grinding. I just want this game to be more fun than making me feel miserable or stress.

These ascension items (evolutionary items) DO exist in rare quests which pop up every 7-10 days. Assuming they fall at 10 days, that’s still a free 3* and 4* ascension item available 3 times a month, 36+ times a year, if not more. 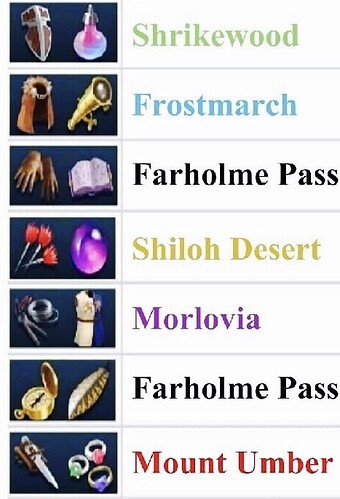 if you have two real tabards a year, and it takes 6 to evolve a purple hero, you only need 3 years … I don’t know how you can defend this, seriously

Because the tabards (and ascension materials in general) fall from many sources. This is just the one “guaranteed” source that you can track on your calendar.

It costs 6 tabards to level a 5* purple. I’ve leveled at least two in two years without buying additional ascension materials. My materials currently range from 2 (tabards) leftovers to 21 (tonic and darts) ready to go. Other people have collected many more.

As you can see from my Darts and Tonic, I’m prepared to level 3 greens and 3 yellows EACH when I get them to that level.

May I remind you of forum rules: Your conversation should be constructive. If you don’t like how something is done, by all means suggest a different way of doing it.

I’ve been playing this game for two years and I would recommend people not to play.

Or, you could recommend them not to pay. I’m quite c2p, and after more than 2 years of playing, my problem isn’t ascension items, but acquiring worthy hero’s to ascend. Then again, you don’t say how many 5*'s you have ascended already. For me, the number is 18, and I have materials for 7-8 more. If you, let’s say, have ascended 25 hero’s already, you are probably okay.

I have 15 heroes uploaded, I must be the person with the worst luck in this game … because killing 12 * titans, staying in tournaments at 1%, opening 4 chests, winning battles … and look at that bad luck jajajja

I don’t think my suggestions are heard, but I will try. I think the rewards have to be distributed in another way and reward people who do things well (titans, wars, tournaments …) It may not be that in my alliance to the B and C they constantly touch good prizes with the titan and the A are not touching anything. I think the game is fair and I propose that change. I do not ask you to give us more evolutionary materials, I ask that it be easier to get them if things are done well. Have attainable goals.

Yes, my A and A+ players would certainly like to see more ascension materials.

Have you seen Mai’s thread on it (and Revelate’s redo)? I mean read through it? I understand it differently after reading through…

No, can you send me the link? Thank you

I wonder if there is a hero whose special skill is filling out mana of all ally heroes by 30% for example? - a mana generator hero -

I know Misandra and some other heroes will fill mana of friends randomly when they attack or steal mana when the enemy mana is filling out, but not adding mana.

There are several heroes who increase mana generation. In 3*, Friar Tuck does. In trainable 5*, Khagan does. In limited edition heroes, Alberich does, and so does Margaret. There may also be others that I’m not remembering at the moment

@saulcaaa this game comes down to luck that comes & goes.
Look in the ridiculous bragging thread I post lots of pictures like this

No, can you send me the link? Thank you

Summary: This post is a summary of the epic thread that the inimitable Mai began months ago; it is being created as some things have changed since the original analysis, some new information has come to light, and Mai is no longer around to update her original post for easy information access. Titan Grades: Kill: A+: position based, rank 1 on the damage scorecard A: position based, ranks 2-5 on the damage scorecard B: ranks 6+, player must do at least 3.3% of the Titan’s HP in damage C: ran…

Don’t you think that would be super over powered? Add that hero to 4 fast hitters and “the sky would fall” in E&P land.

And slow mana generation for the caster …

Finally, I leave the game. It has been more than three months without awards and I was discouraged. It’s a great game and it’s a shame that I lost the essence of the start, which was to entertain all the players. I will start in another game similar to this. Good luck to you all!!