Now that province 19 is released and it’s shown that the season 3 plot involves Hel, why don’t add her to the summon portal?

This last option may obviously require to remove her from the tavern of legend portal.

Maybe SG has already planned this, but if not I wanted to add my suggestion.

There are already many good heroes plus more to come by I doubt they would move her to season 3 portal and that will remove her from ToL with is the worst portal for now to pull so not gonna happen. They need every good hero in to motivate people to pull in ToL portal.

True, but putting her in the S3 portal would give her a realm bonus wouldn’t it? Then again, that would be a reason not to put her there as they may not have a mechanism to retroactively add a realm bonus to an existing hero.

I don’t think that it would be difficult to change the card properties, we saw SG applying changes to heroes (buffs, nerfs, whatever) in the backend without the need of even roll out an update of the game app

to the card owners, it should indeed sound like a buff so I don’t believe that anyone would get upset by such an edit.

However, there’s also the first idea, simpler and not requiring any change to the card nor to the TOL portal: adding her as an additional bonus draw in the Valhalla Summon Portal, that I think would even make sense considering her past nature of HOTM

As someone who already has Hel, I would think it would be cool if they make her a little stronger. As one of the very first HotM, I still think she’s a great hero and use her .

Sorry, no spoiler was intended, in fact I told nothing about why, how and what she is supposed to do in the storyline, that is great indeed.

As when you read the names of new actors that will join the cast in the next season of your favorite series on netflix, no more and no less.

Her name was several mentioned before in the story. I always tought, if they going to use the actually Hel or going to create a new one?

, if they going to use the actually Hel or going to create a new one?

Well she actually showed up in the story, Alfrike reporting to her real Hell queen self.

It would be nice to have Hel in the portal, thats for sure, also having her in the portal does not mean everyone is going to get her.

So I would really appreciate if they put Hel in the portal as featured hero, since she is originally part of the norse mythology too

Yeah, and i was impressed to see her

And imagining her and Alfrike joining force

; would also love to see her featured in S3 portal.

I was maybe unclear, it was sarcasm. Thought the part ‘great story’ was the giveaway

my apologies for the confusion!

Is there screens of Hel being mentioned? I’m not forwarding Valhalla for now since I’m farming for an avatar (I know I am a clown) 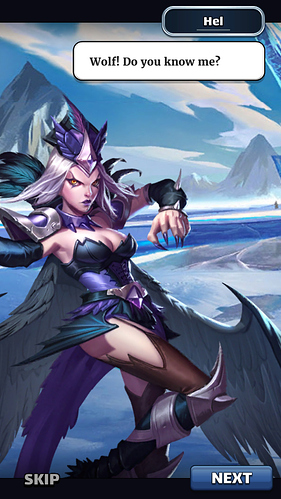