About the Hero Balance category

What an idea! That channels the topic. Almost missed it. Thank you @Petri. But for 100 heroes there will be 100 buff requirements and 100 nerf requirements. And much to do for the mods.

Short version: Buff all the oldest heroes, at least a little.

I would agree that they should remain weaker than newer heroes for business reasons. However, it’s reached the point where the oldest heroes are usually trash that isn’t even worth drawing. Most people in my family stopped playing once they realized that even most of their very hard-earned 5* summons were not even going to help them at all, and we did not have A+ rosters.

mana speed from fast to very fast.
Deals 468% damage to the target
The target gets -40% accuracy for 6 turns. Chance to miss also applies to offensive special skills

May I recommend adjusting his blind down to 4 or 5 turns if he is going to VF? Either 4 or 5 would be longer than a VF normally gets, and that has always been kinda Joon’s thing, a long debuff, with probability to fire again before it expires. 4 or 5 turns at VF would be the same way as 6 at Fast

Edit @FraVit93 since it doesn’t show it as a reply

Marie Therese,
Her zombies are useless these days…

And one more thing:

We already have limited number of votes.

Let’s assume I have used most of my votes for ideas about some general game related improvement ideas, but I want to vote for buff some of the heroes here, then I might need to revoke my vote from a new building idea to vote here to bufff a hero…

Maybe some extra votes about the current quote would be good to have the ability to vote for heroes.

I am unsure can you add another pool of votes for these, but increasing the possible vote count might be possible.

this right here. or, maybe at regular intervals, make a poll where players can vote on top x% of current proposals they want to support. Otherwise this will get really messy and chaotic, with so many heroes being proposed!

I’ll say it again, there are so many heroes in need of buffing, and so many good proposals, I don’t know where to start. (And we don’t have anywhere near enough votes either!)

@Petri , @Dudeious.Maximus , @littleKAF , would it work to have some sort of regular poll where players can vote on submitted proposals? maybe every X number of months. 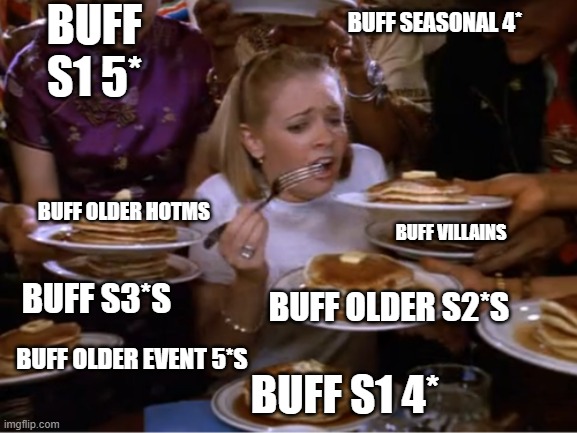 All allies’ health is boosted by 600 HP over 4 turns. If health exceeds max HP, it is added as temporary HP. Max temporary HP is 100% of max HP. Boosted health counters max HP reduction.
The caster and nearby allies get +46% defense for 4 turns.
The caster and nearby allies get +74% defense against Special Skills for 4 turns.
Element Link summons a Dark Minion for all Dark allies with 5% HP and 10% attack inherited from the caster.

At this stage of E&P, the list of heros that need a buff or adjustments is massive. They started noticable power creep in season 3 and just became worse. You can see some newer 4*, are better equiped than many older 5*. I always find it odd when looking for an older 5* in my roster, that many newer 4* are higher on the list. I organize my roster by power.

Power creep to a degree is understandable but its becoming a issue. Its making so half the 5* in the game, are rarely useable. Then its wrong on every level to make us have to spend to chase a C of our favorite older heros. Ones we already spent plenty of time and money to advance. I get it, cost them to develop new costumes. Not denying them making a profit. Customes should just have a much higher drop rate if that hero is already in the roster. Then maybe % goes up according to how far we have progressed that hero. They can still make some money that way. Better odds for those that have spent the time and money. Already paid once for it. Not right to ask us to pay more to make it useful. All because they do big power creeps to intice people to spend.

Would be great if they just buffed the hero, but we all know that is going to be rare. They will push costumes that you need to chase if you want to make your older favorites heros relevant again. Fine, but change the odds accordingly so the dedicated player doesnt feel so abused. After all, player loyalty does increase their bottom line.

I’m completely in on this. Same story, finally a good hero (back then) and she gets nerfed, badly. I would specifically like to see her healing improved, like doubled. In return they can take out de direct damage, which is a joke at 90%.

When EP started the season 1 heroes had 3 speeds: slow, average and fast. No passives and their specials fairly simple (damage/ heal and a secondary effect)

My suggestions on buffing S1 heroes:

Up the charge speed by 1 (slow to average, average to fast and fast to very fast) this will make them mana speed relevant.

Add a passive:
Before we start: Let’s say that a S1 5* had good stats in 2 of the 3 categories (example: high attack and health with low HP)

Passives to each hero in the area they lack:

Attack: 5% attack every time this hero is hit during battle (max stack 10)

HP: 250 boosted health at the start of each battle.

Thank for reading, this might not be perfect but hope to open your minds on making these heroes attractive and competitive.

I’m just going to note here that of the single-hero “buff” threads, the highest vote count so far is Vela 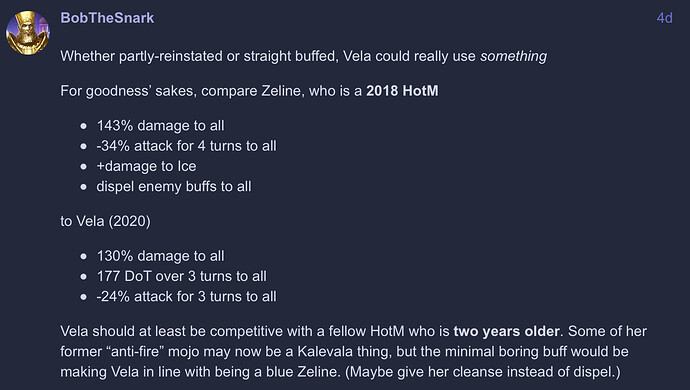 with a number of posters noting that Vela could easily “just” be restored to her original release (or even buffed further) and, far from making her anything like OP, it would help her balance significantly.

Don’t you think that stacks will not resolve defense-related deficiencies? A useful stack will require that a hero either sustain damage multiple times or use their special multiple times. When their defense attributes are poor, the stack might seem like chasing a pot of gold.

I am incredibly curious to know what statistics SGG has on these heros. What are their usage rates compared to their rostered rates? What’s their win ratio for raids? Etc.

(Huge example that comes to my mind – I’ve heard from SGG that Boss Wolf preforms much better than the community thinks in raid defense, yet despite that he’s a frequently mentioned name in this thread as an “irrelevant hero”. Having public metrics would help a ton!! Anyways…)

Another important question is how “balanced” are we aiming to make this game? It’s no secret that power creep is an intentional feature of the game to constantly give players something new and exciting to want to spend money trying to acquire. Despite this, hero adjustments (buffs and nerfs) have seemed to become much more commonplace within the last couple years.

Could it be interesting to have balance patches where metas are purposely shaken up? Or are we simply looking to narrow the power gap between seasons of heros?

One final question I have is how SGG approaches hero identity / niche. Can (should?) multiple heros fill the same niche equally? There are a HUGE number of heros in the game today so it seems difficult to make all of them equal in their own specialized scenario.

These bits of information could have SIGNIFICANT impact on how balance suggestions should be approached too. I’ll toss some out here after thinking further, but I wanted to share this message in the meantime in hopes that it maybe gets an answer or gets some other community members’ brains turning.

Buff the attack power of Evelyn to 300% to be paired with new heroes of the same speed.

Boss wolf and exeera need no explanation, they’re so useless

Also new ones like Kaelrn:((((( make him fast at least

Greetings to the entire community. From my perspective, the heroes to improve are all those from season 1 and Miztero, and all the heroes of the month prior to 2021. Mention those from events such as King Arthur, Little Red Riding Hood, and giving Krampus and the Christmas family their power back. , since many abusers have come out with which to counteract.

Please buff devana and all costume heroes the same stats with s1 heroes. Thanks.

Speed, change her to average rather than slow