A good use for Thorne?

So far this game has seen fit to supply me with exactly one 5* Blue hero. Thorne. Three times.

Yes, 3 Thorne and 0 other 5* Blues. Its starting to seem as if E&P either wants or is daring me to find a use for him. This is what I have come up with.

With the right supporting cast, I think he might do well in challenge events. Let’s look at the final stage of an event. You’ll be facing 3 Bosses. Have Boldtusk first, he will buff your attack. Grimm second, he will hit all three hard with the attack boost and will also lower their defense. Then comes Thorne; he hits all three with an attack of 460% + 48% and their reduced defense will make it even more effective. Of course the two side bosses get “moderate” damage, which I understand to be about 50% of the main target. Still a pretty hard hit, all things considered.

It seems like this combo might do well in Raids and AW, though you don’t have the ability to use mana pots to make sure everyone is ready at the same time. Grimm and Thorne are both average mana and would always be ready together, assuming both get triggered at the same time.

Does this sound reasonable? Anything I’ve over looked?

You can verify this by triggering boldtusks special, then tap and hold on Thorne to see his base attack has a green number above it which represents 48% of 605.

If Thorne does let’s say 500 damage with his special without Boldtusks attack buff, he will not do 750 with Boldtusks buff. I don’t know why. Wrote to SG about this. They said there is nothing wrong. It just how it works i guess.

I find Thorne in combination with Grimm and Kiril a really good team for raiding against any red tank. Of course the board must be a bit in favor of you. Im using them for quite some time. There team work is awesome.

Next question is, does this make Thorne worth the ascension mats?

i wasn’t a fan of Thorne, but had no choice to ascend him (no other 5* blue, should have waited a bit longer. Got Magni two weeks later) Now, i Like him a lot with a attack buff and defence debuff on opponent. Also Kiril, Grimm and Thorne are average, so they fill there mana simultaneous and a triple Blue does some serious tile damage. 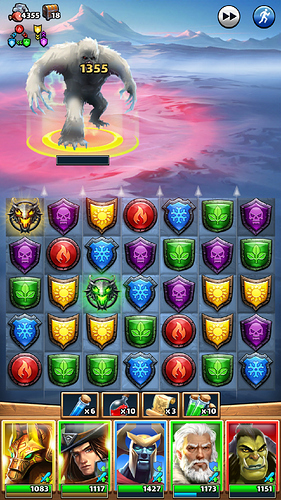 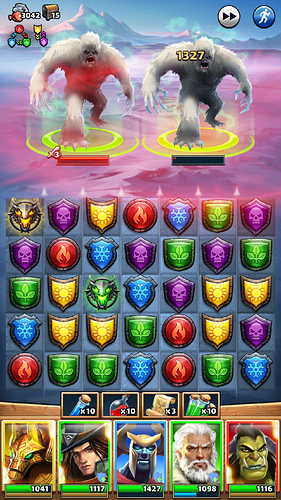 It doesn’t translate into real damage unfortunately. One pic magni with attack buff, the other one without

Don’t forget the damage calculation includes a multiplier random value that is theoretically between .6 and 1.649.

After several months of statistical analysis of raid and AW fighting, here is my conclusion. The damage can be estimated from the attack / defense ratio with a power function. EDIT : After the post of RedPython, it made me think and I redid my calculations … And finally, everything is clearer! all my previous calculations are merged into one formula, so I modified the original message. Again thank you @RedPython!

I found that the number 2.60 suits Thorne pretty well~

But I’m cruel: I had let him taste a tiny bit of power to then negate further ascensions, letting him wondering why he were ever developed

I don’t know if you know Venusaur’s meme (what is Venusaur doing?) but it is what I think Thorne is good for

Had to google that. Lol

I guess I did that to Quintus and Khagan.

Take thorne, put him on defense, equip him with 4* crit troops, put GM and Zeline next to him both equipped with 4* mana troops and voila:-)

Take thorne, put him on defense, equip him with 4* crit troops, put GM and Zeline next to him both equipped with 4* mana troops and voila:-)

So to make him “work” you only need the two best flankers of the game?

This speak volumes on Thorne’s viability

Now on more serious note, Thorne has high survivability and when one searches for a tank, he looks for high survivability. So if one has awesome flanking heroes, why not to use Thorne as a tank, I wonder? I wouldn’t use him on offense, but he isn’t so bad on defense anymore imho.

obecause he does almost nothing to affect the board board position. at least richard nerfs 3 heroes attack pretty badly.