A 7d Civil War Is Upon Us

Special live 24h-broadcast of the war?

This is going to be very interesting. I wish I could watch first hand with popcorn.

This is one I would like to see streamed live

If this was streamed live it would mostly be filled with me complaining about my crappy boards a lot and being sad face.

Yah. anchor’s in game avatar is cyprian - who is missing his nose (ie his “pickle”). So a running joke about who has to help him go find his pickle.

would be amusing if they did leaders from each country. lol. they can have a vote on it.

You’d have to pick five… someone would be unhappy!

And one country’s national hero is another’s war criminal

who you talking about??

I dunno, maybe you’d pick Napoleon as a French hero, but to other countries he’s a megalomaniac.

Are we discussing the same thing? I suggested that the American team would win if George Washington was an E&P hero…

It’s really neat so many people wanted to watch the war, but unfortunately, we decided it was in our best interest not to expose our strategies. Hope you guys understand! We’ll post the results, however, here and in our discord server. (http://discord.7ddgaming.com)

It was a tough war, but Condemned edged Reborn (Reborn, however was 29/30) 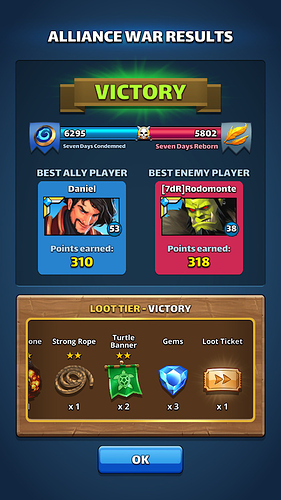 @JonahTheBard Yes, but that would be a lot of work, especially for an amateur video editor haha

6 posts were merged into an existing topic: Bad Mana’s - E&P pun and games

I see scores of 6k and dreeeam…