Who should i level first Buddy, Peters or Hansel?
I’ve been lucky in my green pulls recently?

Welcome, WOW, all three are good heroes, congrats. I don’t have Buddy myself, but I’ve fought him enough that I’d say he should go first of the three. Followed by Hansel and finally Peters.

There are so many play styles though that any combination might actually suit you better. Who will they be joining on a team?

Hi, thanks for quick answer.
My team : Ares/Grazul as tank. Kiril, Seshat, Li Xiu( replace by Neith when upgraded) or maybe Proteus

Without knowing the rest of your roster, I would level Hansel first then probably Peters next.

Buddy is a great 4* but there are other pulverizers that can be used.

Hansel and Peters are great for suppressing heroes from casting.

Nice, I take at least one Proteus everywhere he’s allowed. Buddy’s atk/def down is great if you have the hitters to take advantage of it, but it’s only 3 turns. With that team I might just go with Hansel first.

I vote for Hansel first.

I also moved your post to Gameplay Help & Tactics - Player Guides is meant for ‘How-To’ stuff and things like that. Gameplay Help is for questions

Thanks, it’s my 1st post so i obviously made begginer mistake

No worries. We all learn every day.

I would choose Peters first, because you already have a cleric for your emblems, but not a rogue.

Hansel! Then Peters, then Buddy imo

Buddy is the rarest out of the 3 though. Once a year, but u have a whole month to summon him, while the other 2 are every 3 to 4 months i believe

I would go Hansel or Buddy. For you I would lean towards Hansel.

Hansel is just great. His special is much better than Peters at mana control.

Buddy is way beyond a pulverizer…so much more. He also lowers Atk, throws up meat shield minions and has 5* durability. 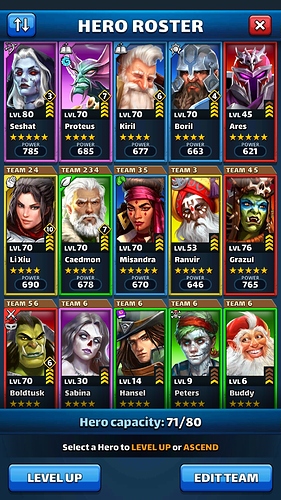 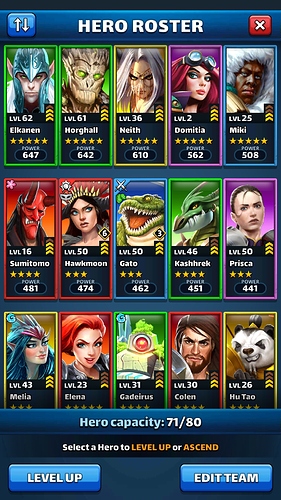 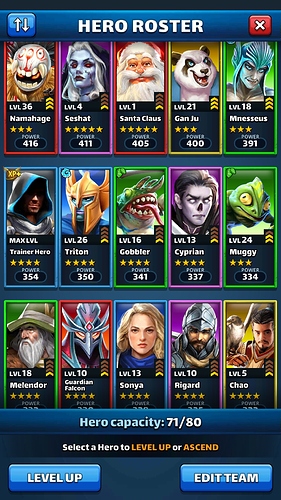 Doesn’t look like you have a pulverizer and you have Proteus, so Buddy it is.

I would level Rigard asap, as your next purple. And the battle for cleric emblems is even tougher. That’s why I recommended you Peters first, because he’s much sturdier than Hansel, besides is rogue and that makes him way harder to kill. Mine is +19 and is a game changer, especially in epic tournaments.

Anyway, whatever your decision will be, you need that Rigard asap.

Buddy is a cool tank in epic bloody battles and a titan runner. I don’t use him elsewhere. He’s to slow and hits like a boiled noodle.

Hansels special is the coolest, but he will die on 4 raids until he gets one off.

Peters > Buddy > Hansel
would be my ascension order.

Personally, I always prioritize defense down heroes first. So I vote for Buddy.

Any of these ailments are just so important to have for dealing high damage to titans, taking out tough bosses, and clearing the tough missions in the game. Your damage dealt can increase to explosive levels, particularly when paired with an attack buff to your team

Sidenote – I also recommend you max your G. Falcon asap. He’s a 4* with 5* survivability, and he’s the only hero in the game so far who casts the fire defense down ailment.

I would go Hansel - Peters - Buddy.

When I’m stacking 3-2 with green as the main colour, Hansel is always in. He’s just too good, I made many pulls at last Grimforest: didn’t get any 5s but wasn’t disappointed as I got a second Hansel. Will surely max him, together with my second Proteus.

I got two Peters at last Corellia, still have to level him but he always gave me troubles when I fought against him.

I have a friend that has a Buddy +20 (def + life path), with monstrous statistics. His debuffs are indeed very useful, but I agree that mana control/blocking specials is even better.