I have 23 Tabards & 23 Rings burning holes in my inventory and no other Purple & Red projects worth talking about… which of these 3-70’s or dupes would you ascend?

My normal mono Purple team is C.Rigard+20, Panther, Hel, Jabberwock, and Seshat. I’m not sure any of those 3-70’s would break into that team normally. So I’m thinking C.Quintus might be the best option for Rush Wars/Tourneys.

My normal mono Red team is C.Marjana, Elizabeth, Gravemaker, Mitsuko, Grazul. Similarly to Purple, I don’t think any of those 370’s make the primary mono squad. We seem to face a fair number of Green tanks in War so the secondary mono team is Falcon+20, Elena, Queen of Hearts, Tyr, C.Boldtusk+1. Is a second C.Marj worth it? Or Santa / C.Khagan for Rush Wars / Tourneys? Or Darkhorse… second Elizabeth?

If it were me I’d ascend C Domitia for purple. She is cleanse or dispel…both relatively rare for 5*. Red is a tougher choice. I’d probably do Yang Mai for fun. She’s a good hero to play with.

Non-selected heroes and why:

C. Domitia: you’ve got Onyx already…
Malicna: is malicna so it’s enough for ignoring her
MokArr: can be useful but he will need emblems
Aeron: nah
Obakan: 2nd C. Sartana over him would be better
_
Yang: nah
Reuben: a joke
Noor: looking at other options… nah
Lion: his costume is A+ but the naked version is a joke
Elena: i love her but she´s a joke when side to side with other options

Purple: definitively grimble considering the meta then malicna she is awesome and highly underatted.

Red: cMarjana 2 and then probably kaghan + cb for the VF war and events team

You clearly look like an experienced player, so I will skip the explanations. Though not difficult to guess.

With this much depth, I’d suggest focusing on heroes for very fast wars or challenge events.
Grimble and Malicna are two I’d consider for purple.
For red, Khagan is good for events. Can you have too many costume Marjanas? Otherwise duplicate Elizabeth for very fast wars.

Purple I’d do Grimble then C-Dom.

Kinda surprised at the love Malicna is getting. My gut says she’s really sub-par 2/3 of the time.

For darks, I’d do Domitia and Grimble.
For reds, I’d do JF first and then Yang Mai. I might then do Noor if I’m bored, especially if you’ve got Frosth.

But in a purple stack… Malicna is a worthy ally to have. An alliance mate suggested pairing with Ursena - awesome! Oops you don’t have her… Nvm

Grimble and Malicna are two I’d consider for purple.
For red, Khagan is good for events. Can you have too many costume Marjanas? Otherwise duplicate Elizabeth for very fast wars.

she is never subpar as she hits decently. the second effect is just bonus but can be game changing.

the elemental link is way more valueable in a mono than you think.

In my honest opinion for purple I would go with Costume Domitia, Grimble or Malicna.
But I get that you would use Quintus in rush wars and tournaments but then that would be it. So do you really really need him?
For Red I would definitely go with duplicate Costume Marjana and Costume Khagan
Whichever heroes you choose good luck

Purple:
Domitia+costume for sure as dispel/cleanse is very handy anywhere. Then Grimble but only if you don’t have Skadi. Or Malicna if you have a lv 23 troop.

Red:
Second cMarjana for sure (just max the costume but leave base form at 4/1), these days I pretty much use the costume exclusively. If you run mono a lot, Yang Mai could be useful for her elemental link, but otherwise she’s kinda meh. JF is decent against the sea of Friggs (and soon, Morels) out there, and Santa is a pretty OP for rush anything.

My normal mono Purple team is C.Rigard+20, Panther, Hel, Jabberwock, and Seshat. I’m not sure any of those 3-70’s would break into that team normally. So I’m thinking C.Quintus might be the best option for Rush Wars/Tourneys.

You are blessed with three dark legendaries I don’t have: Hel, Cobalt and Jabberwock. I have maxed copies of your other maxed heroes, except Kunchen (I have two of him, one at 3/70 while the other is untouched; I prefer using any of my 4 maxed costume Rigards for healing purposes, sometimes costumed Sabina). My other maxed legendary purples are Kageburado, Domitia and costume, Alfrike, and recently, Malicna. I have recently used tabards on Grimble and he will be my 9th maxed purple legendary soon. Still have 16 tabards in my inventory. The reason why I maxed Malicna and ascended Grimble is for me to have another solid monopurple team only for war (mixed with several good epic purples like cRigard, cSabina, Tiburtus w/ MCB, Ametrine and Proteus), and that Malicna gives mana over time due to her Element Link and that Grimble is good against minion meta (courtesy of Freya, Bera, Telluria, Krampus, etc.) as he also gives mana to allies. It might also be in your best interest to develop a second monopurple team for war purposes. Who knows, you might face enemy teams employing holy tanks. The meta changes every now and then. My main monopurple team is costumed Rigard (or original Rigard with MCB or costumed Sabina, depending on who are on the opposing side), Panther (for dispel to 3), Alfrike, Kageburado (for dispelling riposters before dealing damage) and Ametrine (for possible dispel to one and/or nearby and/or all enemy). Currently using lightly emblemed Malicna instead of Ametrine just for me to have a grasp of how she performs in raids.

As to your reds, I am envious of your Elizabeth, Marjana’s costume, Tyr, Yang Mai, and Queen of Hearts as I don’t have them. Among your roster of reds, I have maxed copies of regular Marjana, 2x Gravemakers, Mitsuko, Grazul, Jean Francois, Azlar, and Khagan and his costume. My other maxed red 5* heroes are Captain Kestrel and Ares, while at 3/70 are Red Hood, 2nd Mitsuko, and Reuben. I am or will be working on Elena (w/o costume) to 3/70 as it has become my habit to level less-desired heroes to the max tier prior to fully ascending them. I have already 3 monored teams for wars, supported by epic heroes such as several maxed copies of Boldtusks, Wilburs and Falcons. Again, you may level another fire legendary for your 2nd or 3rd monored team for wars. Yang Mai would be one of those I would love to max. If your concern is maxing a dupe hero, my primary consideration for maxing a very good dupe hero is the availability of emblems. Santa is so-so, only good if you have other xmas heroes like Krampus and/or Mother North.

Purple grimble first, because no other hero can do this 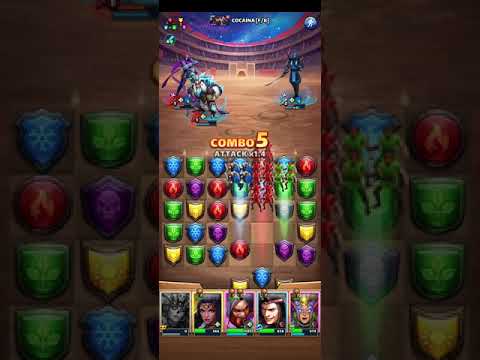 Then malicna - as others have said she is solid 2/3 of the time and awesome 1/3 of the time. The elemental link is very useful for stacking 2+

Red is c marj 2 and yang mai is fun especially again when you consider the elemental link. Santa for vf formats would be an option too. Perhaps jf is also worth a looki-in although never for defense he can be too easily countered these days

Thanks for the feedback. I pulled the trigger on Grimble and C.Marj#2.

To roughly summarize the votes that came in:

Second cMarjana for sure (just max the costume but leave base form at 4/1), these days I pretty much use the costume exclusively.

I find the Costume far more useful as well. But the problem with leaving the base hero at 4-1 is that you can’t add Emblems.

Purple : Definitely Grimble
Red : Probably C.Marjana again, quite useful for Wars when there’s a possible Red Sniper in the future.

To bring this full circle. I ended up Max’ing Grimble and C.Quint in purple, and C.Marj#2 in Red. I also pulled the trigger on Santa (in progress). C.Quint and Santa will give firepower for VF War/Tourneys.

I’ve since pulled Lepiota, so she’s the current purple project after which Chakkoszrot will go up to 3-70.

I’ll add my vote for yang mai to get some love. I have her at +20 and that attack stack adds up quicker than you think most of the time. I mostly use her for offense with GM and G.Kong and they wipe out most enemies fairly quick.

I think Grimble was a good choice. I use him for minions and the crit up on titans.