I have to admit. These tournaments really force me to be dedicated to my hero leveling projects! I look ahead to see what tournaments are upcoming and what seasonal or challenge event are approaching, and I see what hero(s) I have leveled (and emblemed) and what I might need to work on to improve my chances of succeeding. I have leveled more 3*, 4* and 5* heros in the last 4 months than I did in the first 6 months. I really do enjoy these tournaments!

What would be better? 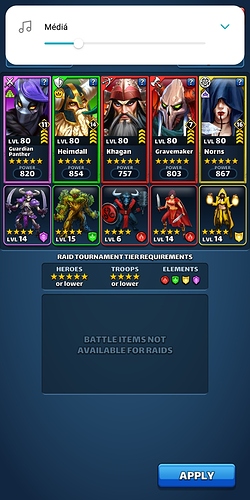 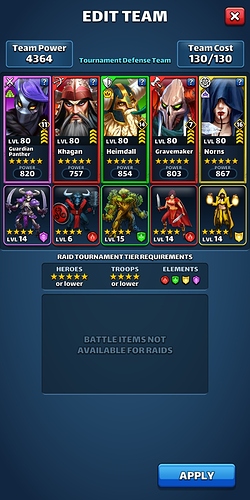 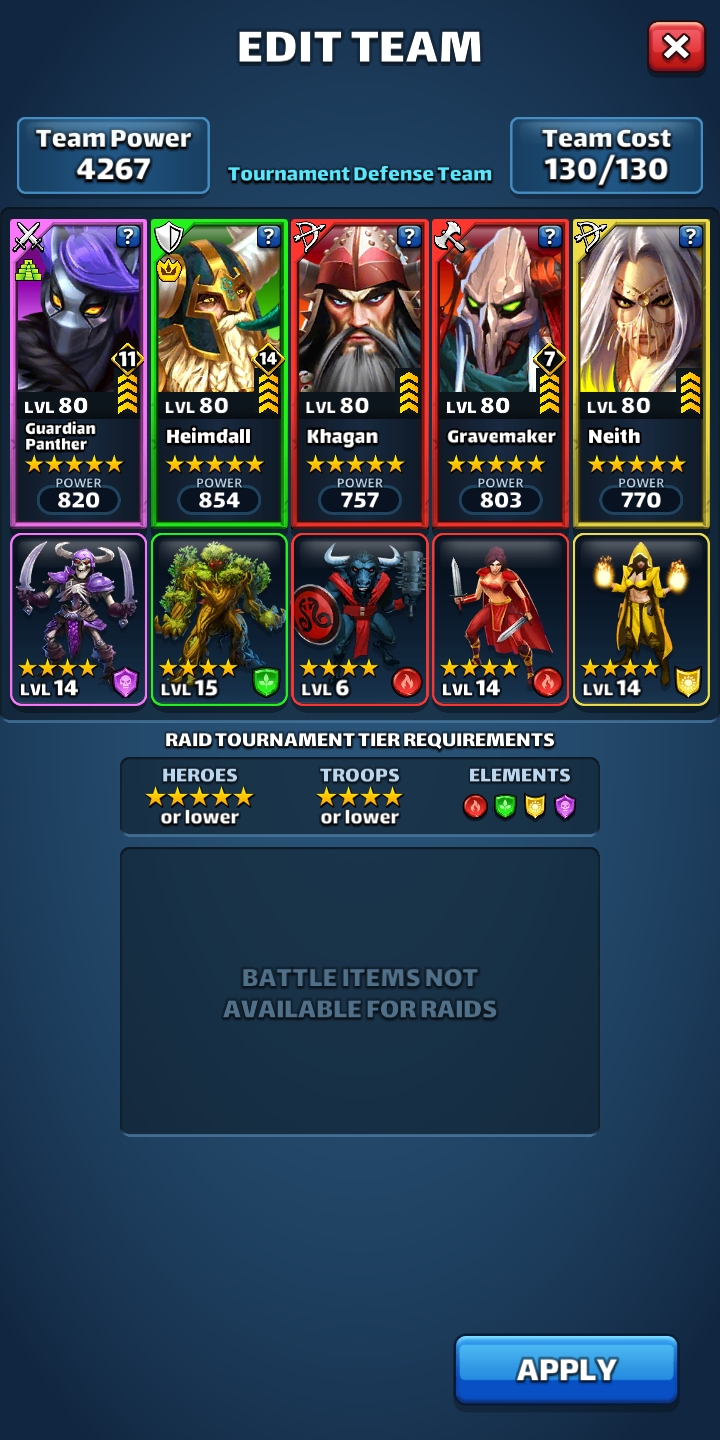 @ApollosEmpire Regarding Grimble vs Telluria. I need to test this out more. Usually, I don’t take Grimble against GTV. I tend use Kunchen as my Dark hero instead. I’ll. Try a few raids and see what happens and get back to you.

This option is my vote but with Neith instead of Norns.

Thank you and if I put Neith next to Khagan and GM on the wing? Isn’t that a good idea?

Anyone got any advice for my selection? 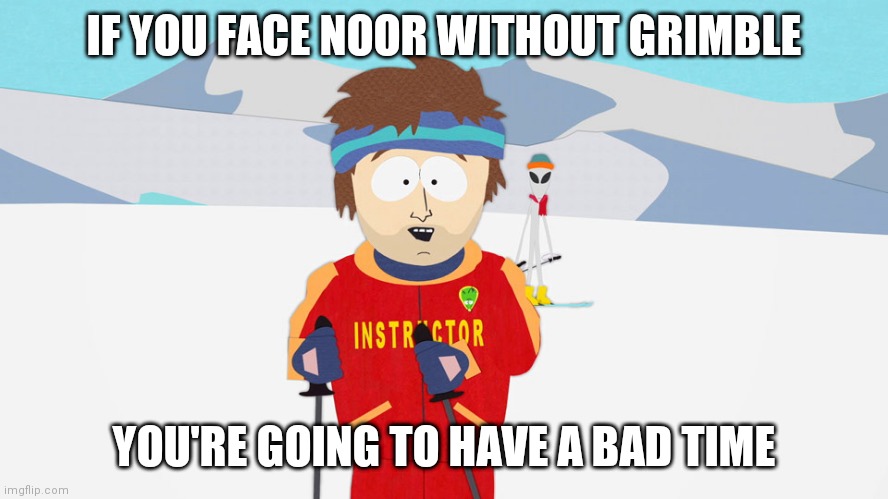 Especially if she’s accompanied by Sif and Heimdall.

Even more so if all three have fired before any of your heroes have even half mana!

Jeeez, I had a never ending battle on my first match.
It was my fault + I was only being fed 1 tile match every few moves, which made it impossible for me to be causing damage to the enemy.

The reason I say it was also my own fault is due to me taking costume caedmon and I took NO dispeller to remove THEIR Wilbur link. I killed Domitia before she fired, but then after that it was so slow… Telly / Wilbur / BT constantly going off was just impossible, and the cascades I would get were not helpful ones.

Also 4-1, defence 0-1. My loss came out of Elena tank, which revived 4 times, and she stayed alive. The problem is: she had just 6 tallents. Wish my fighter heros were so determined to stay alive.

My expectations here are quite low, so this will be a relaxing week.

I had Colen revive 6 times and get healed EVERY time by Rigard, and then Sabina was after Colen, so she would also heal. That was frustrating. Oh and not to mention Colen got his special off 4/6 of those times! Luckily It was giving me tiles I needed and I had killed the tank - and I used Costume Caedmon + C Rigard, so I could cleanse. But damn that was infuriating lol

I also had a Gato reviven 6 or 7 times in a match, don´t remeber if it was in tournament or in a regular raid.

My defense team; Not doing a great job 1-3 atm. 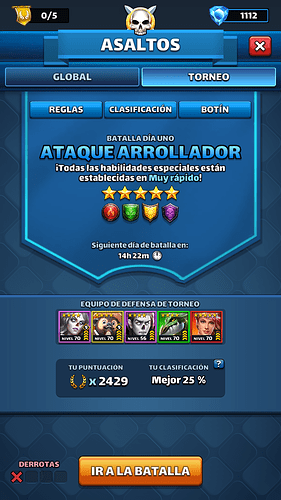 This was my attacking team sometimes swapping Kashrek for a 3.70 Elkanen.

Pretty hard battles with several turnings. Annoying superfast healing. My main source of damage was riposte, it works perfect against those Horghall or Gadiros…

Was very fun I have to admit. let´s see next days.

I faced Tarlak+7, Grazul+5, Noor+3, Groot+7, Stonecleave+20 for my first match, the opening board had 16 green tiles on it and Noor even went off once but I still won. Used cRigard, Mist+14, Malosi, Proteus+19, Jabber+6. Then just alternated firing Mist and Proteus and none of the opposing heroes besides Noor could even gain (much) mana.

In fact for this tourney I’m pretty sure Mist+14, Proteus+19, and Malosi will be the MVP for me and will be on every attack. You can put out the craziest defense you want, but if I find two yellow or purple matches your heroes ain’t firing lol. We’ll see how the rest of the week goes…

Forgot to record the 1st att, but here are the other 4 from today: 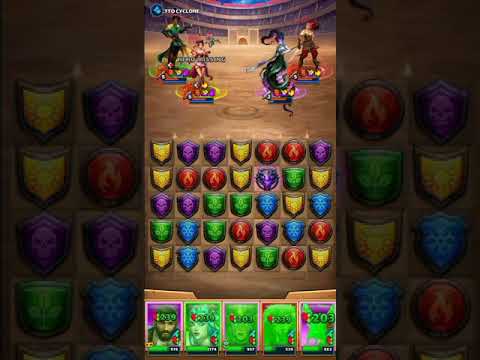 In fact for this tourney I’m pretty sure Mist+14, Proteus+19, and Malosi will be the MVP for me and will be on every attack. You can put out the craziest defense you want, but if I find two yellow or purple matches your heroes ain’t firing lol. We’ll see how the rest of the week goes…

Yes, it’s going to be very helpful to have those Mana cutters. I have mist and proteus both +19 and they’re fantastic in a yurple war attack team.

Good job coming back on the 2nd fight on the video. That 3rd fight vs the mono red grazul tank was not pretty. That’s 1 team I’m not interested in fighting… no telly tanks

Maybe tomorrow or later.
Filled my chest afterwards.
That was Telly all over.
GTV block-burn-reflect feast.

Yep I’ve really come to appreciate just how powerful mana slow/blocking is, I’d rate it as the #1 skill in the game - if your heroes can’t gain mana, they’re nothing more than sitting ducks.

Also have Hansel+18 on the bench but not sure how much action he’ll see since I expect to see a lot of red tanks this round.